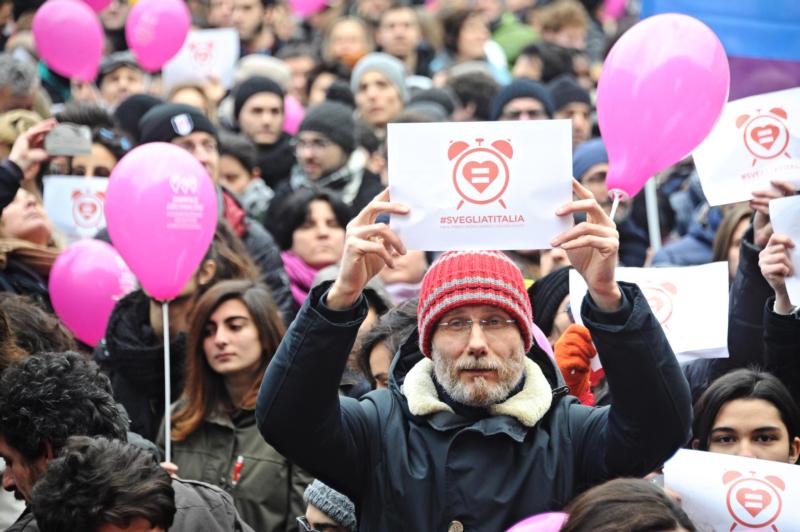 People gather to demonstrate in favor of the law on civil unions in Florence, Italy, Jan. 23. After months of public debate and protests, the Italian Senate passed a bill that grants legal recognition to nonmarried heterosexual and homosexual couples. (CNS photo/Maurizio Degl'innocenti, EPA)

ROME (CNS) — After months of public debate and protests, the Italian Senate passed a controversial bill that grants legal recognition to nonmarried heterosexual and homosexual couples.

The legislation, known in Italy as the “Cirinna” bill, passed Feb. 25 after the bill’s sponsors removed a proposed clause that would allow for a nonbiological parent in a homosexual union to adopt the biological children of his or her partner.

To become law, the bill also needs the approval of the lower house of the Italian parliament; a final vote is expected within two months.

Reaction to the vote has been mixed. Although Italian Prime Minister Matteo Renzi hailed the vote as a victory, Italian Sen. Monica Cirinna, the legislation’s main sponsor, called it a “hollow victory” given the removal of the adoption clause.

On his return flight from Mexico, Pope Francis affirmed the church’s teaching that marriage is only between one man and one woman. However, when asked to comment on the bill, he said, “the pope doesn’t get mixed up in Italian politics.”

“The pope is for everybody and he can’t insert himself in the specific internal politics of a country. This is not the role of the pope,” he said Feb. 17. “What I think is what the church thinks and has said so often — because this is not the first country to have this experience, there are so many — I think what the church has always said.”

Echoing the pope’s sentiments, Cardinal Gerhard Muller, head of the Congregation for the Doctrine of the Faith, said that although church leaders should not “put themselves in political affairs,” they are called to remind politicians of their duty to “respect human nature over which they are not masters.”

During a conference marking the 10th anniversary of Pope Benedict XVI’s encyclical “Deus Caritas Est” on charity, Cardinal Muller stressed the church’s position that “a marriage between two men is not possible” and that politicians are called to serve the community and “not impose a false ideology.”

NEXT: God seeks those who need him most, charity should do same, pope says