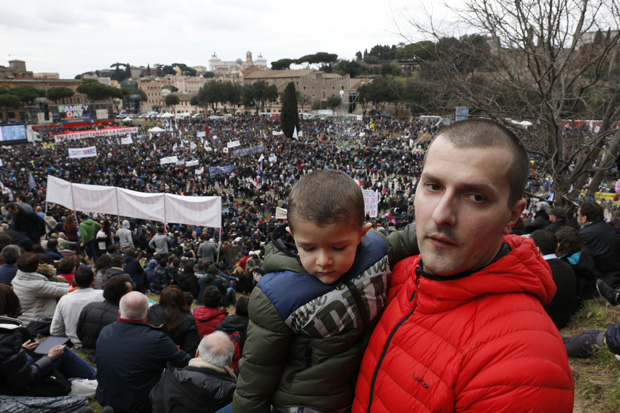 People attend the Family Day rally at the Circus Maximus in Rome Jan. 30. The rally was held to oppose a bill in the Italian Senate that would allow civil unions for homosexual and heterosexual couples. (CNS photo/Paul Haring)

ROME (CNS) — Hundreds of thousands of people gathered in Rome’s Circus Maximus to protest against a proposed bill that would grant legal recognition to nonmarried heterosexual and homosexual couples and give them the right to adopt children.

Although not officially sponsored by the Catholic Church or any other religious group, the rally Jan. 30 did include men and women religious and at least one Italian bishop. Most of the participants were families, many carrying signs defending the rights of children to be raised by both a mother and a father.

The legislation, known in Italy as the “Cirinna” bill, includes a proposed clause that would allow for a nonbiological parent in a homosexual union to adopt a child conceived by his or her partner, either through artificial insemination or with a surrogate mother.

The event’s organizer, Massimo Gandolfini, told the crowd that the rally’s aim was not “to make war against anyone” and that traditional families are the backbone of society.

“The family cannot become a neglected institution; it is precisely the family that keeps our society standing,” he told the crowd.

The “Family Day” rally, which is credited with leading to the defeat of a similar civil union bill in 2007, received endorsements from Catholic leaders and politicians in the country.

According to the Italian newspaper La Stampa, Cardinal Angelo Bagnasco of Genoa, the head of the Italian bishop’s conference, said Jan. 17 the rally was “absolutely necessary.” Days before the legislation was to be debated on the Senate floor, Cardinal Bagnasco also addressed concerns over the proposed bill, saying that the Italian constitution must be “appreciated and cherished.”

“Children have a right to be raised by a mother and a father. The family is an anthropological fact, not ideological,” he said.

PREVIOUS: Humiliation and humility go together on path to holiness, pope says

NEXT: Zika prompts government to tell women when to get pregnant