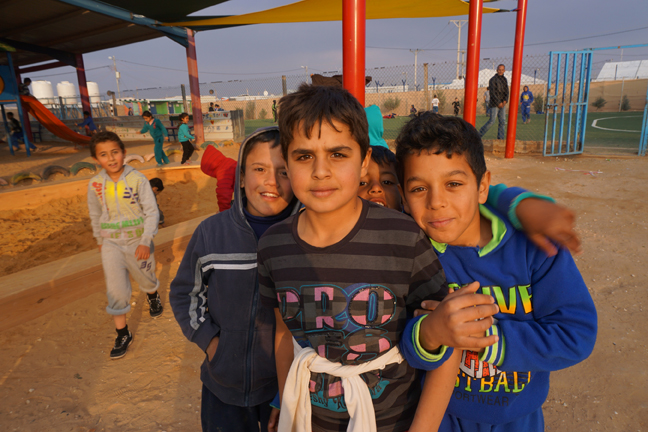 Syrian refugee children pose for a photo Jan. 14 in a child-friendly space created by Mercy Corps inside the Zaatari Refugee Camp in Jordan, near the Syrian border. (CNS photo/Dale Gavlak)

AL-KHALDIYA, Jordan (CNS) — As a donors conference to stem the Syrian refugee crisis opens in London, Syria’s neighbors, which have hosted hundreds of thousands of refugees for the past five years, say they cannot continue to bear the brunt of the burden.

King Abdullah II of Jordan, one of dozens of world leaders set to participate in the Feb. 4 gathering, has warned that his country is now at a “boiling point.”

“Sooner or later, I think, the dam is going to burst,” he told the BBC, saying the refugee influx engulfing Jordan is draining it of funds, vital social services, education and health care.

And it’s not just Syrians coming: Iraqis and others fleeing violence in the aftermath of the Arab Spring uprisings still seek shelter in the cash-strapped, oil-poor kingdom.

The Syrian crisis has cost Jordan $6.6 billion over the past five years, Jordanian officials recently reported. In 2016 alone, Jordan can expect to spend $2.7 billion on refugee assistance. But officials said that international aid pledges for the refugees have remained underfunded.

It’s not just governments that are going into the red over the continuing crisis. Humanitarian agencies, like the World Food Program, have faced mounting financial challenges to keep up assistance.

Last autumn, the World Food Program cut back on food aid to the refugees, some of whom responded by heading to Europe or returning to Syria. The program said it now has funds to help feed 526,000 vulnerable Syrian refugees in Jordan until May.

The international Catholic charity Caritas, operating in Jordan, has tried to pick up the shortfall with food aid. But it, too, is dependent on funds from Caritas partners worldwide and government assistance to help provide Syrian and Iraqi refugees with shelter, education and winter items.

“By this first quarter, we received around $14 million, so we have a gap of $7 million-$8 million this year,” Abawi told Catholic News Service. “Although we are still in the first quarter, we expect that 90 percent of the needed funds will be received.”

Nikki Gamer of Catholic Relief Services said funding for CRS programming comes from private donors, “so in that way we haven’t been impacted by some of the funding shortfalls, like the World Food Program cuts.”

In Jordan, CRS focuses on education for Syrian and Iraqi refugees who are not able to attend public schools due to a lack of places. Caritas is its implementing partner in the program.

“We provide remedial classes for those children who are missing out on formal education, and we are trying to keep them up at their grade level so when they do get back to formal schooling, they will be able to continue in their education and they won’t be left behind, said Gamer, the CRS Middle East communications officer.

But after nearly five years of civil war in Syria, “there is certainly donor fatigue as well as fatigue from among the public as far as interest is concerned in this topic.” Gamer added, “As we hit the anniversary in March, I wouldn’t be surprised if interest in Syrian refugees from a media perspective were to dwindle.”

Alice Wells, U.S. ambassador to Jordan, told CNS the donors conference “is an important opportunity for the international community to demonstrate to the neighboring states of Syria our commitment to support them as they host this unprecedented number of refugees.”

Wells spoke as she oversaw a U.S. aid distribution of blankets to 200 Syrian refugee families to help ward off icy temperatures in this Jordanian town near the Syrian border.

She said that, at the London conference, the U.S. would pledge to support Syrian refugees in addition to the more than $70 million made to the U.N. refugee agency in Jordan last year. The United States is expected to take in at least 10,000 refugees this year.

“Our donation represents just a small but vital part of the overall U.S. contribution to humanitarian relief efforts in Jordan. Since the start of the crisis, the United States has provided nearly $668 million, including $219 million alone,” Wells added.

Wells said 85 percent of refugees in Jordan live below the poverty line.

Andrew Harper, the U.N. refugee agency’s representative to Jordan, urged Europe to step up its financial commitments to Jordan and neighboring countries hosting the refugees, even as more refugees and migrants attempt to enter the continent.

It’s believed that there are now 13.5 million vulnerable and displaced people in Syria and millions who have fled abroad. The London conference hopes to raise significant new funding and address long-term refugee needs.

“We are looking for concrete commitments, particularly from Europe, on how they can help Jordan help the refugees stay here until such time they can go home in peace and dignity,” Harper told CNS at the aid distribution point.

“They don’t want to leave their homes, their country, the region. But because of circumstances, the lack of opportunity, they often don’t have a choice,” Harper said. “Jordan needs the means to maintain their very generous tradition of hosting refugees.”

Both Wells and Harper said other ideas are being floated to address the financial crises of maintaining support for refugees. One such notion explores the possibility of allowing refugees to work legally in specific sectors that will not harm Jordanians, who face a 16 percent unemployment rate. In order for this to work well, more international investment in needed in Jordan’s economy.

PREVIOUS: Pope asks Mexican people for time alone with Our Lady of Guadalupe