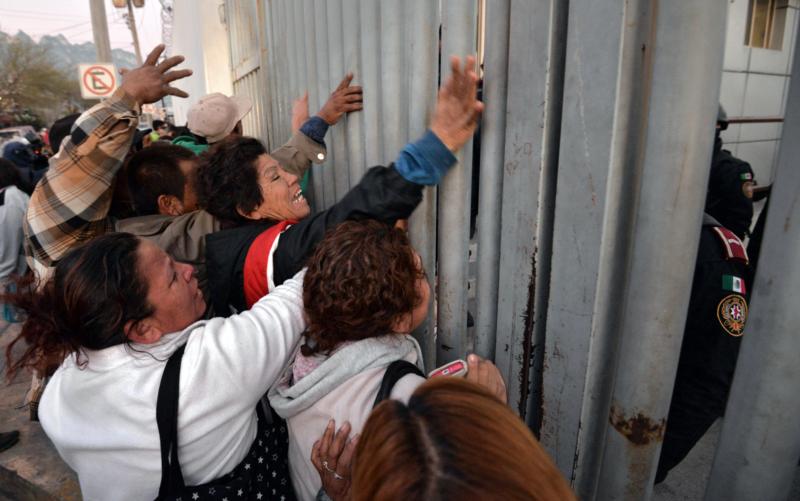 Relatives of prisoners demand information about the Feb. 11 riot at the Topo Chico prison in Monterrey, Mexico. The riot claimed 52 lives, offering another example of the problems plaguing Mexicos prison system and casting a pall over the arrival of Pope Francis in the country. (CNS photo/Miguel Sierra, EPA)

MEXICO CITY (CNS) — A prison riot in the northern Mexican city of Monterrey has claimed 49 lives, offering another example of the problems plaguing Mexico’s prison system and casting a pall over the arrival of Pope Francis in the country.

Nuevo Leon Gov. Jaime Rodriguez Calderon confirmed the initial death toll of 52 Feb. 11, but it was later changed to 49. Rodriguez Calderon attributed the bloodshed to a clash between groups led by incarcerated leaders of the Gulf Cartel and Los Zetas. The criminal groups, which were once partners, have fought for control of crime and smuggling territories in Mexico’s northeastern states.

The clash in the Topo Chico prison came just one day before Pope Francis was to arrive in Mexico City for a six-day trip in which he was expected to address issues such as insecurity, corruption and violence.

Pope Francis’ agenda includes a Feb. 17 visit to the once-notorious Cereso prison in the border city of Ciudad Juarez.

State officials say the Ciudad Juarez prison has improved in recent years, with gangs no longer ordering crimes in the city from behind bars, though priests working in the diocesan prison ministry and with the families of inmates say problems persist such as inmates having to pay for protection and privileges.

“There’s a certain control by groups inside the prison. This has not completely been eradicated,” said Father Oscar Enriquez, director of the Paso del Norte Human Rights Center in Ciudad Juarez. He works with families with relatives inside Cereso prison.

A 2014 report on correctional facilities from the National Human Rights Commission found widespread problems persisting in Mexican prisons such as overcrowding, self-rule and inmates awaiting trial being locked up with those already sentenced.

“Topo Chico had an occupancy rate of 156 percent” in 2013, said Jorge Kawas, security researcher and analyst in Monterrey. “Like most local prisons, it is also underfunded and pretty much ungovernable.”

“They know how to calm the authorities down by doing things that are pleasing to the authorities,” Father Coogan said, pointing to the way inmate leaders will keep prisons with self-rule clean, maintained and orderly as a way to keep wardens on their side.

“The reason for (inmates) controlling the prison is that you cannot have an escape every time someone comes in. But sometimes they will use their manipulation … to get the people they want to release all in one place. Once they get them in one place, then they’ll set them free.”

NEXT: Cookies, sombrero and a shoe shine: Even reporters give pope gifts