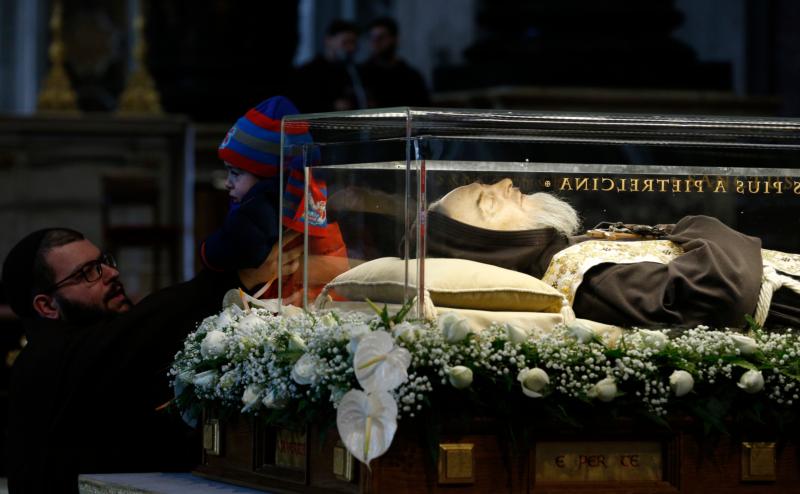 A child is lifted to come into contact with the glass case containing the body of St. Padre Pio in St. Peter's Basilica at the Vatican Feb. 6. The bodies of St. Padre Pio and St. Leopold Mandic were brought to Rome at the request of Pope Francis for the Year of Mercy. (CNS photo/Paul Haring)

VATICAN CITY (CNS) — Praying is not like taking an aspirin, something one does just to feel a little better, Pope Francis told thousands of members of Padre Pio Prayer Groups from around the world.

Prayer is not a business negotiation with God, either, the pope told more than 60,000 people gathered in St. Peter’s Square Feb. 6. Prayer is a “work of spiritual mercy,” a time to entrust everything to the heart of God, he said.

The pilgrims were in Rome for the Year of Mercy and a week of special events that included veneration of the relics of St. Padre Pio and St. Leopold Mandic, both Capuchin friars who often spent more than 12 hours a day hearing confessions.

Although many faithful believe the body of Padre Pio, who died in 1968, is incorrupt, church officials have never made such a claim. When his body was exhumed in 2008, church officials said it was in “fair condition.” Chemicals were used to ensure its long-term preservation and the face was covered with a silicone mask.

Pushed through the center of Rome Feb. 5 in glass coffins on rolling platforms, the relics of Padre Pio and St. Leopold were escorted by Italian military police, dozens of Capuchin friars and thousands of faithful.

When the procession reached St. Peter’s Square — the boundary of Vatican City State — the Italian police stood at attention and the Swiss Guard took over the honor-guard duties. Cardinal Angelo Comastri, archpriest of St. Peter’s, welcomed the relics, blessed them with incense and accompanied them into St. Peter’s Basilica where they were to stay for veneration until Feb. 11.

At the papal audience, joining members of the Padre Pio Prayer Groups from around the world were staff members of the hospital he founded, the Casa Sollievo della Sofferenza (House for the Relief of Suffering), whose work is supported by the prayers and donations of the prayer groups.

Pope Francis told them that their devotion to Padre Pio should help them rediscover each day “the beauty of the Lord’s forgiveness and mercy.”

With his long hours in the confessional, the pope said, “Padre Pio was a servant of mercy and he was fulltime, carrying out the ‘apostolate of listening’ even to the point of fainting.”

“The great river of mercy” that Padre Pio unleashed, he said, should continue through the prayers and, especially, the willingness to listen and to care for others shown by members of the prayer groups.

NEXT: Pope says he goes to Mexico as a ‘missionary of mercy, peace’