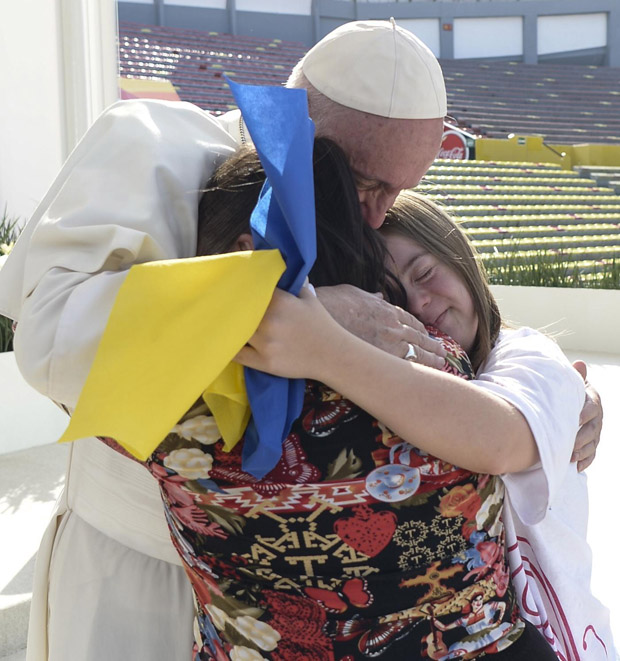 “What kind of world do we want to leave our children?” the pope asked Feb. 17 during a meeting in Ciudad Juarez with 3,000 people representing the “world of work” in a border town known for its factories — maquiladoras — offering low-wage jobs. Mexico’s minimum wage is the equivalent of about $4 a day.

“God will hold today’s slavers accountable, and we must do everything to make sure that these situations do not happen again,” the pope said. “The flow of capital cannot determine the flow and the life of people.”

Daisy Flores Gamez, her husband Jesus Gurrola Varela and two children welcomed the pope; Flores told him the financial struggles caused by the low wages are obvious, but families also are being tested and even destroyed by the long hours workers are expected to put in to earn a pittance.

“We believe the decadence and conflict of values in our society come, in part, from an absence of parents in the home,” she said, pleading with the pope to intercede for them with governments and businesses to institute eight-hour workdays.

Juan Pablo Castanon, president of a national business leaders’ organization, told the pope that half of all Mexicans are poor and six out of 10 workers have no insurance or social security. “With great concern, we see that our efforts over the last decades to overcome poverty have not worked completely.”

He thanked the pope for his visit, assuring him that the business leaders present are committed to a vision of human development that aims at “the sustainability of businesses and sources of jobs,” as well as at promoting a “social dialogue” that will help the whole nation move forward.

Ciudad Juarez, lying on the U.S.-Mexican border, also hosts thousands of Mexicans and Central Americans hoping to cross over into the United States or who already made the crossing, but did so illegally and were sent back to the Mexican side of the border.

The city is infamous as a center of narcotrafficking, is plagued by “pandillas” or armed gangs and, since the early 1990s, has grabbed headlines around the world because of the alarming number of area women who disappeared or were murdered.

Pope Francis told the workers and business leaders that things cannot continue as they have been going and that dialogue and respect for human dignity are the only paths to a better future.

Straying from his prepared text, the pope told those present that he once knew a businessman who would go into negotiations saying, “‘I know I’m going to lose something so that we can all win.’ That man’s philosophy is so beautiful. When you negotiate, you will always lose something, but everyone wins.”

Business owners, just like the workers, have a stake in improving the situation for individuals and for the nation, the pope said. “We do not have the luxury of missing any chance to encounter, discuss, confront or search” for solutions that will provide opportunity while treating human beings with the respect they deserve.

“Anything we can do to foster dialogue, encounter and the search for better alternatives and opportunities is already an accomplishment to be valued and highlighted,” the pope told them.

Looking for common ground, Pope Francis asked the workers and the business people to think about the future they hope for their children and their country. Almost all people would share the same general dream, he said, and they must work together to achieve it.

“What kind of Mexico do you want to leave your children? Do you want to leave them the memory of exploitation, of insufficient pay, of workplace harassment?” he asked. Or, should the future be one of “dignified work, a proper roof (over one’s head) and of land to be worked?”

The pope continued by asking what air they hope their children will breathe: “an air tainted by corruption, violence, insecurity and suspicion or, on the contrary, an air capable of generating alternatives, renewal and change?”

The interconnections of economic activity, employment and the political and social realities of Mexico are complicated, the pope acknowledged, “but it is worse to leave the future in the hands of corruption, brutality and the lack of equality.”

In a town tense for months with workers demonstrating for tiny wage increases and a right to unionize, Pope Francis said he knows it is not easy to negotiate peacefully “in an increasingly competitive world, but it is worse to allow the competitive world to determine the destiny of the people.”

Profit and capital, he said, must not be given more importance than people; rather they must be assets placed at the service of the common good.

“When the common good is used only in the service of profit and capital,” he said, “the only thing gained is known as exclusion.”

Meeting the workers and business owners on the last day of his six-day visit to Mexico, Pope Francis urged them “to dream of Mexico, to build the Mexico that your children deserve; a Mexico where no one is first, second or fourth; a Mexico where each sees in the other the dignity of a child of God.”

Contributing to this story was Junno Arocho Esteves in Mexico City.

PREVIOUS: Pope snaps at pilgrim who caused him to fall into boy in wheelchair

NEXT: Young Caritas volunteer killed in shelling of Aleppo, Syria