Pope calls for ‘integration’ of divorced into church life 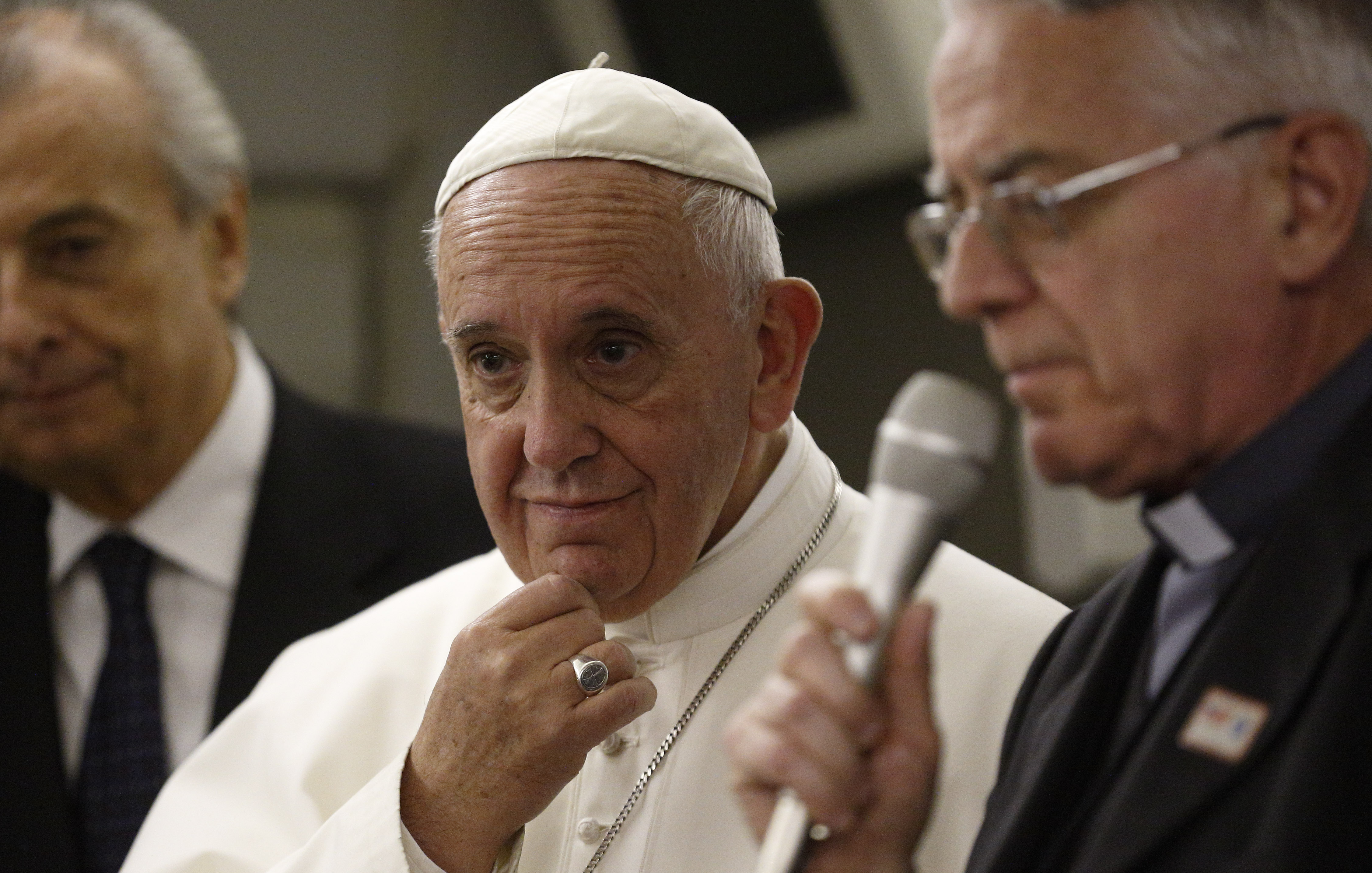 VATICAN CITY (CNS) — Those who hope Pope Francis will give divorced and civilly remarried Catholics a blanket welcome back to Communion and those who fear he will open the doors to such a possibility are both likely to be disappointed by his decision.

Pope Francis told reporters traveling with him from Mexico to Italy Feb. 17 that his document reflecting on the 2014 and 2015 synods of bishops on the family should be published by Easter. There is widespread expectation that the document will be dated March 19, the feast of St. Joseph.

On the specific issue of Communion for those who are civilly remarried without having obtained an annulment of their sacramental marriage, Pope Francis said it was a possibility, but only after a process of re-integration into the life of the church.

Reception of the Eucharist, he said, would be “the point of arrival.”

However, he insisted, “integration into the church does not mean ‘receiving Communion'” as if it were automatic. “I know remarried Catholics who go to church once or twice a year” and say, “‘I want to receive Communion’ as if it were some prize.”

It is not, the pope said. An eventual return to the sacraments would be the result of “a work of integration.”

“All doors are open, but one cannot say, ‘from this moment on they can receive Communion,'” Pope Francis said.

Without a declaration that their sacramental marriage was null, “such a situation contradicts the Christian sacrament,” which is meant to be an indissoluble bond, Pope Francis had explained last August during one of his weekly general audience talks about the family.

Speaking to reporters on his plane in mid-February, he said a blanket invitation to return to Communion without looking at individual circumstances, helping them take responsibility for a failed marriage and encouraging repentance “would harm the spouses, the couple, because it would mean not having them follow that path of integration.”

Pope Francis pointed to the testimony of Humberto and Claudia Gomez, a couple who spoke at his meeting with families Feb. 15 in Tuxtla Gutierrez, Mexico. Claudia was divorced before they married 16 years ago and while Humberto said their relationship always has been one of “love and understanding,” three years ago “the Lord spoke to us,” calling them to join a local parish group for divorced and remarried Catholics.

“We cannot receive Communion,” Humberto said, “but we can communicate through those who are needy, sick or deprived of their freedom,” whom the couple serves through their parish outreach programs.

“These two are happy,” the pope told reporters. “And they used a very beautiful expression: ‘We do not receive eucharistic Communion, but we make communion in visiting the hospital.'”

“Their integration has remained there,” the pope said. “If there is something more, the Lord will tell them, but it is a journey, a path.”

The “integration” of families in the life of the church was a key point at the synods on the family, the pope said, and is a concept that will feature in his postsynodal document, particularly when speaking about families experiencing difficulties and those formed by new unions.

Pope Francis’ focus on the process — and not on the possible end result — means it is an incremental change from what St. John Paul II had written in his 1981 exhortation on the family, “Familiaris Consortio,” which called on pastors to accompany such couples in a process of discernment regarding their share of responsibility for the breakdown of a marriage, their behavior toward their spouse and children since the divorce and their conduct in their new relationship.

However, St. John Paul wrote, “the church reaffirms her practice, which is based upon Sacred Scripture, of not admitting to eucharistic Communion divorced persons who have remarried” because “their state and condition of life objectively contradict that union of love between Christ and the church which is signified and effected by the Eucharist. Besides this, there is another special pastoral reason: if these people were admitted to the Eucharist, the faithful would be led into error and confusion regarding the church’s teaching about the indissolubility of marriage.”

St. John Paul’s points about the objective situation of the couples and about possible scandal were repeated by many bishops at the synod last October. Several of them insisted the synod’s recommendations to Pope Francis left no room for changing that teaching and possibly allowing some couples, in some circumstances to receive Communion.

Other bishops at the synod insisted that a process of discernment would mean little if full reconciliation with the church and reception of all the sacraments were not ultimately possible. They saw their recommendations as leaving the possibility open.

Pope Francis’ remarks to reporters indicates that he, too, sees a possibility but both the sacraments of marriage and of the Eucharist are too sacred to be treated lightly.

PREVIOUS: Disease and cold add to suffering of refugees from Mozambique