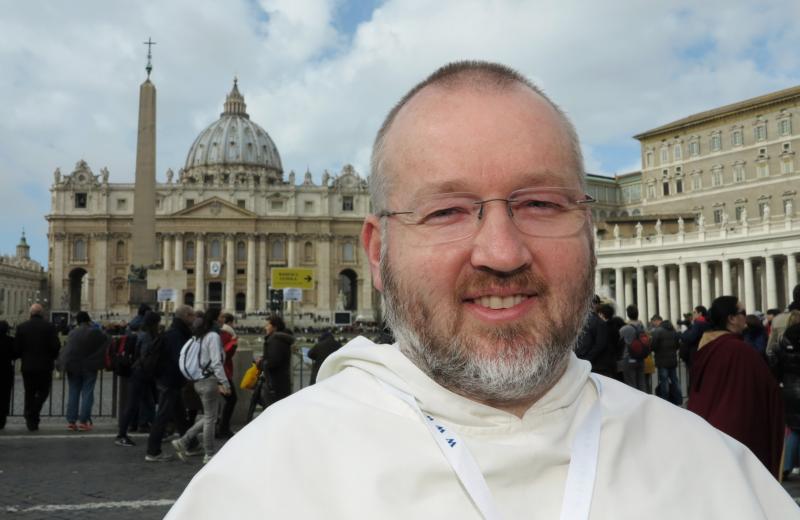 VATICAN CITY (CNS) — After opening holy doors in Rome to begin the Year of Mercy, Pope Francis has now pushed those passageways even wider by sending forth hundreds of “missionaries of mercy” to every corner of the earth.

Their special mission, he has said, is to be a living witness of God’s closeness and love — to knock on the doors of people’s hearts and let God into their lives, especially those who have become distant from the church.

The jubilee’s call for a church to “open wide the doors” has percolated down to local dioceses so that all people, not just Catholics and Christians, can feel welcome, said Jesuit Father Richard Shortall.

The priest was one of the more than 1,100 religious and diocesan priests who applied and received the special papal mandate to be missionaries of mercy. He and several others spoke to Catholic News Service in mid-February when they traveled to Rome to be commissioned in person by the pope Feb. 10.

Father Shortall, a native New Zealander, said he will serve as “a missionary on wheels” for Australia’s extensive Diocese of Maitland-Newcastle, taking God’s mercy on the road to more than two dozen rural communities that lack a resident priest.

Having the camper, donated by the diocese, will allow the priest to just pull up to a parish, “plug into an outlet” for electricity and carry out his ministry.

A calendar online shows where Father Shortall will be as well as a telephone number to contact. He said he plans on setting up a whiteboard with times throughout the day so that people can reserve a slot to sit down with him, either in the church or outside if being inside a church makes them uncomfortable.

“We have lost so many people in our congregations because of the history in Australia of the sin of the sexual abuse of children and others, and practices of bullying,” he said. So the Year of Mercy is another opportunity “of dealing with that” and reconnecting people to God.

He said his hope for the jubilee is to help people “tell their story” because so many want to be heard “and to have their hurt acknowledged.” Through confession or prayerful conversations, he wants to help people leave their hurt behind and “experience the healing offered by a God of mercy.”

Dominican Father John Maria Devaney works primarily as a hospital chaplain in New York City and “the greatest thing I see,” he said, is when people who have been away from the faith discover “we can always heal the soul, even if the body is falling apart.”

It is never too late to be reconciled to God, who is always there through the priest, who will “sit down with these people — gently, calmly — the way Christ would meet the woman at the well” and have a one-on-one encounter that offers peace, mercy and reconciliation.

“You see the change in the people,” that despite their body failing, “the soul just shines brightly again every time we encounter the mercy of Christ.”

The Jubilee of Mercy has special significance for the Dominican order, which is celebrating this year its 800th jubilee, said Dominican Father Pius Pietrzyk, who is in Rome for his doctoral studies in canon law.

The Dominicans have a special charism of preaching “to explain what mercy truly is” and providing that teaching to the modern world. Preaching God’s truth is a sign of mercy, he said, because it steers people away from “dangerous ideas” and harm.

A large number of missionaries of mercy belong to religious orders, and Father Devaney said religious congregations have always been “kind of the special forces in the church,” ready to take on special challenges “and unique and new opportunities.”

Like the others who spoke with CNS, Capuchin Father David Songy said he was inspired to apply as a missionary of mercy because he saw the mandate already fitted neatly with his current ministry.

As president of St. Luke Institute in Maryland, he heads a facility that helps priests and religious, who are struggling with addictions and psychological problems, rediscover God’s mercy.

It’s often difficult for pastors, who are so used to taking care of other people, to realize they are weak too and should ask for help. Their patients’ ministry to others had suffered, he said, because “you cannot give mercy until you know how to receive it.”

Being a confessor is part of the Capuchin charism, he said, and he urged all priests during the Year of Mercy to focus on hearing confession.

“I know many priests will say, ‘Well, they don’t come.’ (But) if you’re there, they will come. If you pray while you are waiting for them,” he said, “if you give yourself to the people, this gift of mercy, they’re going to be attracted to that and they will come.”

“We hear hours of confession a day,” said Dominican Father Michael Mary Dosch of St. Patrick Church in Columbus, Ohio. Making the Sacrament of Reconciliation so visible and seeing the long lines of people waiting before the confessionals actually inspire and draw people who normally wouldn’t think of needing to confess, he said.

Father Dosch said offering people hope in the confessional means helping them see the ways God is already working in their lives, lifting them up in little or big ways.

Feeling that encouragement and being open to God’s grace are key to breaking the discouraging cycle of sin, he said.

But it’s a two-way street, Father Dosch said. God “is working their salvation with them, it’s not magic. It’s God’s grace working upon natural efforts. He won’t do it without them.”

NEXT: Surge in Zika virus rekindles abortion debate in Brazil