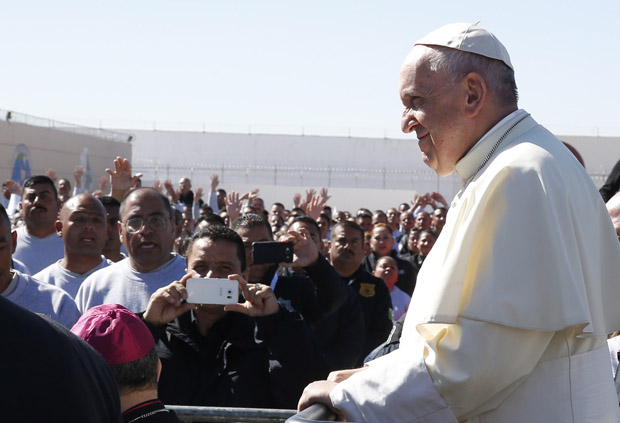 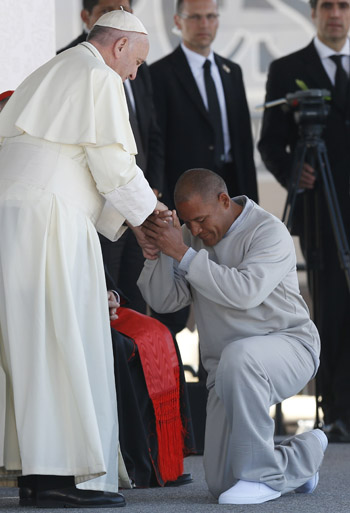 CIUDAD JUAREZ, Mexico (CNS) — Pope Francis urged society to rethink its ideas of locking up inmates and throwing away the key, calling such an approach another symptom of the “throwaway culture” he often decries and “a symptom of a culture that has stopped supporting life, of a society that has abandoned its children.”

Speaking in a prison previously plagued by riots and controlled by drug cartels in a city once considered the “murder capital of the world,” the pope proposed focusing on prevention, reintegration and a system of “social health,” instead of on only on incarceration and insisting that inmates pay for their crimes.

“Celebrating the Jubilee of Mercy with you is recalling the pressing journey that we must undertake in order to break the cycle of violence and crime,” Pope Francis said Feb. 17 at Cereso prison, home to some 3,000 inmates.

“We have already lost many decades thinking and believing that everything will be resolved by isolating, separating, incarcerating, and ridding ourselves of problems, believing that these policies really solve problems,” the pope continued. “We have forgotten to focus on what must truly be our concern: people’s lives; their lives, those of their families, and those who have suffered because of this cycle of violence.”

Pope Francis often includes prison visits in his papal tours, drawing attention to a population on the periphery of the church he is trying to construct. Prison officials in Ciudad Juarez say their facility — once considered the most violent in Latin America — has vastly improved since the horror of its worst year 2010, when 216 murders were committed there and rival gangs, fighting for control of drugs running through Ciudad Juarez, carried out crimes from behind bars.

His trip drew attention to the horrors of Mexico’s oft-maligned prison system, marked by overcrowding, corruption and inmates paying for privileges, protection and basics — everything from toilet paper to proper food. Inmate control inside correctional facilities is common.

The trip follows a brawl — blamed on incarcerated members of rival cartels clashing — in a Monterrey prison a week earlier. Forty-nine inmates died. Pope Francis sent condolences for the tragedy in the Topo Chico prison, where state officials subsequently found luxury cells with king-size beds, bars and even a sauna.

In Ciudad Juarez, the pope proposed prevention, along with reintegration and rehabilitation, which he said, “begins outside, in the streets of the city.” 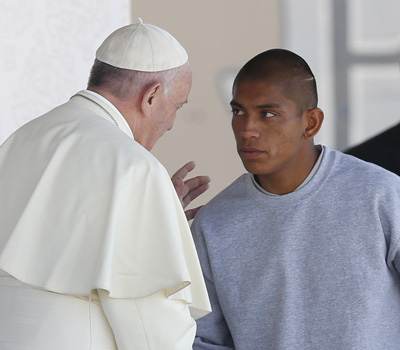 It also “begins by creating a system which we could call social health, that is, a society which seeks not to cause sickness, polluting relationships in neighborhoods, schools, town squares, the streets, homes and in the whole of the social spectrum … a system of social health that endeavors to promote a culture which acts and seeks to prevent those situations and pathways that end in damaging and impairing the social fabric.”

Pope Francis mentioned the Year of Mercy often in his address to inmates, saying: “Jesus urges us to have mercy that embraces everyone and is found in every corner of the world. There is no place beyond the reach of his mercy, no space or person it cannot touch.”

He called concern for prisoners “a moral imperative for the whole society,” in working to toward an improved “common life.”

“It is within a society’s capacity to include the poor, infirm and imprisoned, that we see its ability to heal their wounds and make them builders of a peaceful coexistence,” Pope Francis said. “Social reintegration begins by making sure that all of our children go to school and that their families obtain dignified work by creating public spaces for leisure and recreation, and by fostering civic participation, health services and access to basic services, to name just a few possible measures.”

“Social reintegration begins by making sure that all of our children go to school and that their families obtain dignified work by creating public spaces for leisure and recreation, and by fostering civic participation, health services and access to basic services, to name just a few possible measures.”

Toward the end of the brief meeting, Pope Francis joined the inmates for a moment of silent prayer, telling them that only they knew what they would ask forgiveness for. Several inmates were seen crying as they prayed.

“I tell you from my own wounds, errors and sin,” he said, “that the Lord wants to forgive.”

He ended his talk with the assembled inmates, sitting under sunny skies outside a recently renovated prison chapel, by urging them to no long be “prisoners of the past,” learn to “open the door to the future,” and speak with their loved ones to put an end to “this cycle of violence and exclusion.”

“The one who has suffered the greatest pain, and we could say ‘has experienced hell,’ can become a prophet in society,” he said. “Work so that this society, which uses people and discards them will not go on claiming victims.”

Jesuit Father Federico Lombardi said the pope’s remarks were broadcast to 389 other prisons, with a potential 254,000 inmates watching. 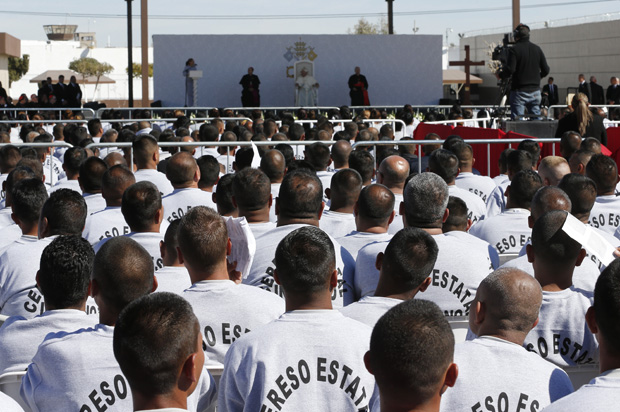 NEXT: Pope snaps at pilgrim who caused him to fall into boy in wheelchair