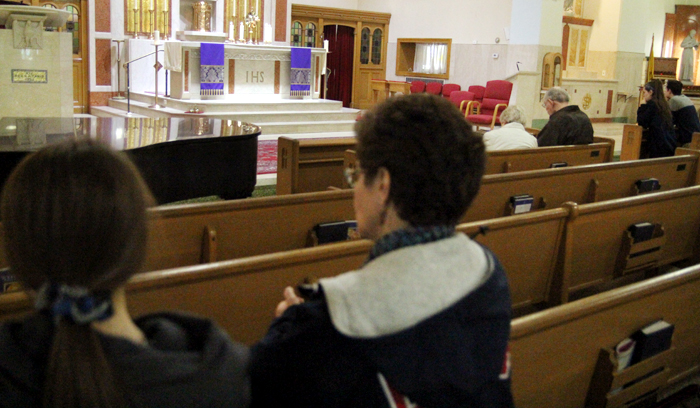 Catholics take some time on a Saturday afternoon to pray before the Blessed Sacrament at St. Francis of Assisi Parish in Springfield, Delaware County, which was participating in the worldwide observance of 24 Hours for the Lord. (Photo by Sarah Webb) 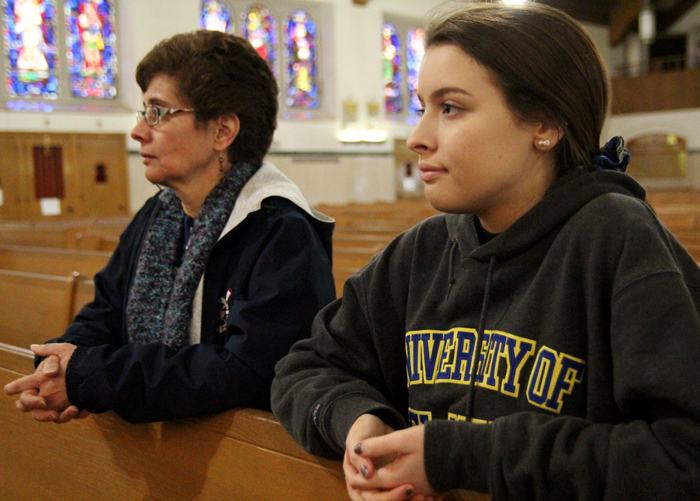 Mother and daughter Maria and Katie Lynch of St. Francis Parish spend time adoring Christ in the Eucharist on March 5 as part of the 24 Hours for the Lord, which Pope Francis called for as a devotion during the Year of Mercy. (Sarah Webb)

Catholic parishes in the Philadelphia Archdiocese responded with enthusiasm to the call by Pope Francis to celebrate 24 Hours for the Lord as a special Year of Mercy observance beginning Friday, March 4 and ending Saturday, March 5.

At least 59 parishes reported their participation to the archdiocesan Office for the New Evangelization, according to its director, Meghan Cokeley. How many other parishes quietly did so without reporting it is unknown.

Ideally, the church would be open for 24 hours with adoration of the Blessed Sacrament during the times Mass or benediction or other devotions were not being conducted. More opportunities for the sacrament of penance was also a feature of the 24 Hours observance.
As a practical matter, some parishes opted not to have adoration during the overnight hours either because of a lack of volunteer adorers or security concerns.

But many did so and in microcosm looking at one such parish, St. Francis of Assisi in Springfield, Father Anthony Costa said in the parish bulletin, “The church will be open for the 24-hour period if we have enough people committed to be present each hour. May we encounter this blessed opportunity in the Year of Mercy to pray before the Blessed Sacrament and experience God’s healing in the sacrament of reconciliation.”

He need not have worried, every time slot was more than covered. 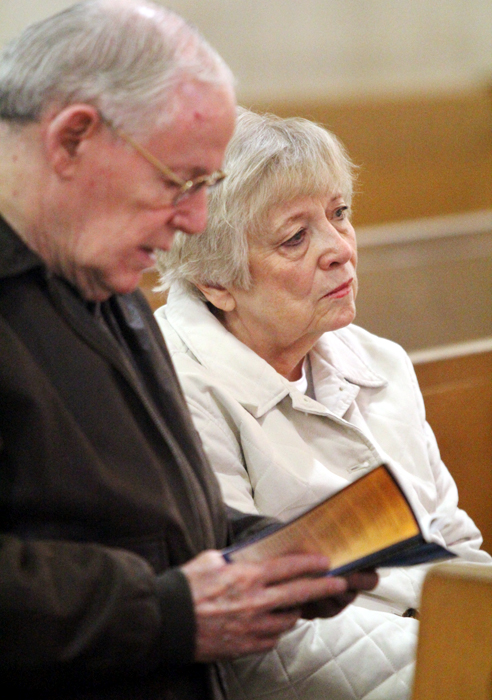 Maria Lynch, who was praying alongside her daughter, Katie, a sophomore at Merion Mercy Academy, said she tries to come every Monday when the parish has scheduled adoration.  “I like to spend time with Jesus, it’s a perfect time,” she said.

“I don’t come as often as my mom,” Katie said, “but it’s a quiet time and very peaceful.” As to whether others her own age feel that way also, she said, “I think some of them do.”

Retirees Liz and Frank Canavan visited as a husband and wife team.

“We weren’t as active as when we were working,” Liz said. “Adoration is such a peaceful time in the hectic ways of our lives. This parish has so many opportunities to get on the right track and stay on the right track.”

“I’m lucky, my wife led me more and more into the church,” Frank said. “We joined the St. Vincent de Paul Society when I retired and I did a lot of home visiting for a couple of years, but now the younger people are taking over. I felt the light of God coming down during adoration.”

“A good number of people signed up and they are coming in,” Father Costa said. “We had three priests for confessions, it was very edifying. People were grateful for the opportunity; they are aware of the Year of Mercy.” 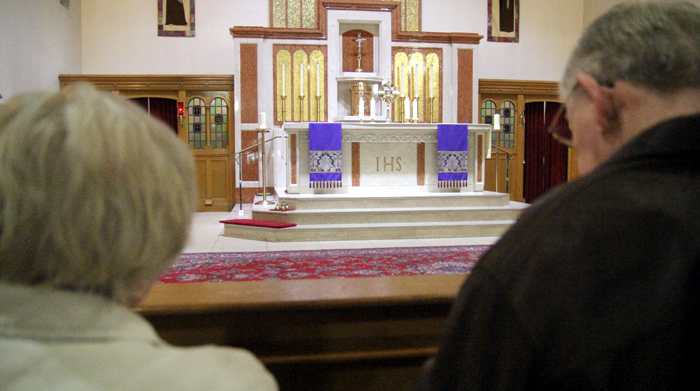 The Blessed Sacrament is exposed on the main altar of St. Francis of Assisi Church in Springfield, Delaware County. (Sarah Webb)

NEXT: Mass brings profound memories and lessons of Mother Katharine