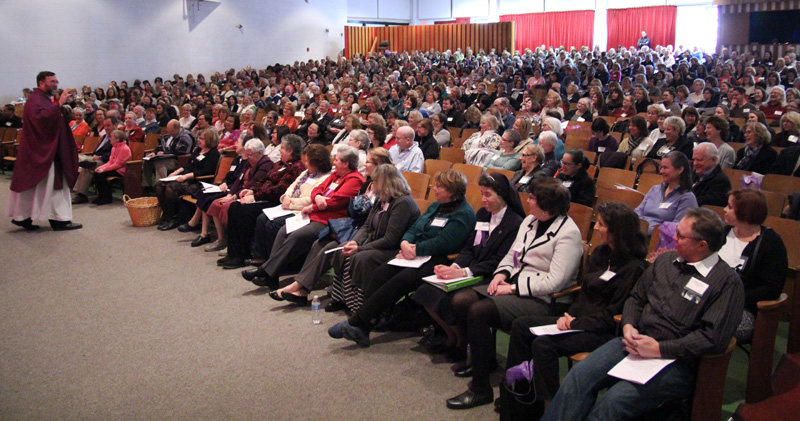 During Mass Father Chris Walsh preaches to some of the 900 participants at the Catechist Convocation March 5 at Archbishop Carroll High School. (Photo by Sarah Webb) 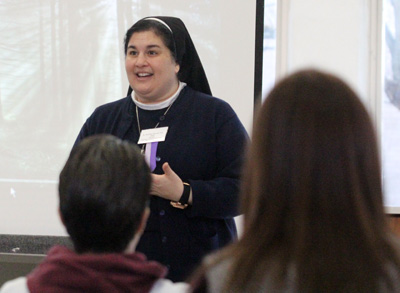 It says something about the faith at the grass roots of the Archdiocese of Philadelphia when more than 900 women and men, mostly lay volunteers, pause from their busy lives to spend time at a Saturday session to learn how to better share that faith with others.

The occasion was the annual Catechist Convocation held this year at Archbishop John Carroll High School, Radnor, on March 5. Normally after 27 years, one might expect a program to be running just on force of habit, but this was the largest ever.

(See our photo gallery of scenes from the day.)

“We are really blessed. It’s a wonderful opportunity for all of our teachers and our catechists to show that they are life-long learners and I think for us it is an opportunity to form them in the faith and to have them model for our children what life-long learning and evangelization looks like,” said Christopher Mominey, archdiocesan secretary for Catholic education.

Mominey estimated about 35 percent of those attending were teachers at the Catholic schools, while the balance came from teachers in the Parish Religious Educations Programs (PREP). He noted virtually all the leaders of the 19 English language and three Spanish language workshops were local talent. Most were drawn from area colleges, schools, parishes and St. Charles Borromeo Seminary.

Louis P. DeAngelo, who is school superintendent for the Diocese of Wilmington and formerly the Philadelphia Archdiocese’s K-12 director of curriculum and staff development, chose the intriguing topic, “Dusty Shoes?”

It was drawn from a story Pope Francis told from his ministry years in Argentina. He would send groups of seminarians out into the unpaved barrios to be among the people. When they came back, he would look at their shoes. If they were not dusty he knew they did not do what he asked them to do.

“In this Year of Mercy we all need dusty shoes,” DeAngelo said. “The challenge for me is my shoes are not dusty enough.”

Father Chris Walsh, pastor of St. Raymond Parish in Philadelphia, celebrated Mass for the group, and his the focus of his homily was mostly on the readings of the day, particularly the parable of the Prodigal Son.

He called attention to the Old Testament where God as Father is only mentioned 13 times. But in the New Testament he is mentioned 150 times, including 53 times by Jesus himself.

“It was very clear that Jesus wants us to know God as the Father who loves us and knows us and will always, always be there for us,” Father Walsh said.

“I came here to learn how to teach the kids in a better way,” she said. “I have third graders, (and) sometimes in class I find myself speaking in monotone. That’s not what we should do. I love this.”

Kim Ladley of St. Joseph Parish in Collingdale commented after attending a session on Mary, Star of the Evangelization, presented by Immaculate Heart Sister J. Sheila Galligan, “She taught me in my freshman year of high school and she is a wonderful teacher. With Mary you can go on and on.”

The whole program “was wonderful, so invigorating,” said Nancy Franks of Mary Mother of Redeemer Parish in North Wales. She is also vice president of the Archdiocesan Association of Parish Directors, Coordinators and Administrators of Religious Education.

As part of the morning Mass, Father Walsh asked those who attended to write on a slip of paper something they would ask God to grant for them.

“I asked God to give me the grace to let something go that is bothering me,” Franks said.

“I asked for a little bit more patience, the gift of patience for myself and my family,” Mominey said.

“I prayed for faith,” O’Connor said. “I try not to ask God for anything material.”

NEXT: Last weekend, Catholics made time for Christ’s healing mercy