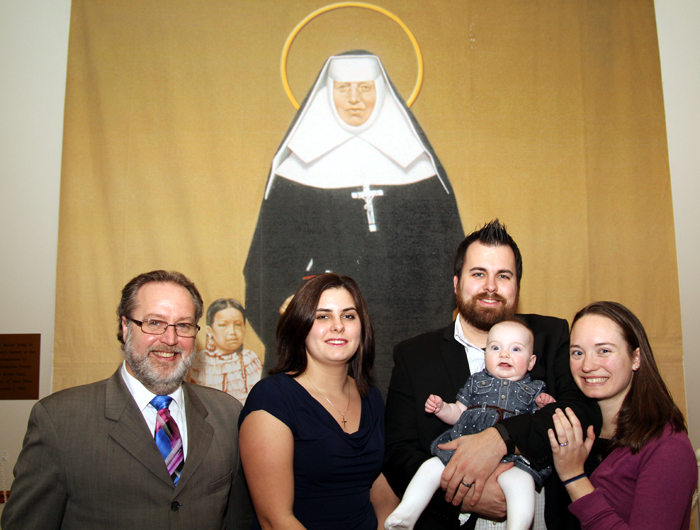 Archbishop Charles Chaput celebrated the feast day Mass for St. Katharine Drexel on Sunday, March 6, at St. Elizabeth Convent, the motherhouse of the Sisters of the Blessed Sacrament in Bensalem.

This year took on special significance because it is the 125th anniversary of the sisters’ congregation, which formally came into being on Feb. 12, 1891, when Katharine Drexel took her vows at the Convent of the Sisters of Mercy in Pittsburgh where she received her religious formation as a postulant and novice.

During his homily, Archbishop Chaput took note of an event that had taken place four years earlier, when Katharine, a wealthy young laywoman along with her sisters, Elizabeth and Louise, had an audience with Pope Leo XIII. Katharine asked the pope to send missionary priests to America to work among the Native Americans because very few American priests were in that ministry.

“In response to that, the pope asked, ‘What about you?’” Archbishop Chaput said. “Instead of sending somebody he entrusted that mission to Mother St. Katharine. “She listened and she did it. Because of her listening and doing we celebrate her feast.”

Katharine, the archbishop said, “responded to the desire of her heart to bring others to her beloved, Jesus Christ, and allow him to use her to bring his loving, caring presence to those on the margins of society.”

Mother Katharine’s congregation really had a two-fold charism — devotion to Jesus in the Blessed Sacrament, and in the terminology of that era, service to “Indians and Colored People.”

It was perhaps fitting at this year’s feast day Mass that the Sisters of the Blessed Sacrament gave their annual St. Katharine Drexel National Justice Award to Father Wayne Paysse, a former executive director of the Black and Indian Mission Office headquartered in Washington, D.C., in a building donated many years ago by St. Katharine Drexel.

As a matter of fact in the early years of the annual collection taken up nationwide for Indian and Black missions, St. Katharine’s annual donation exceeded that of the rest of the country.

In her introduction of Father Paysse, Sister Donna Breslin, president of the Sisters of the Blessed Sacrament, recounted his life growing up in a devout household, influenced by a devout pastor and ministry in mostly African American parishes and mission work. “All of his assignments prepared him for his assignment at the Black and Indian Mission Office,” she said.

Turning to Father Paysse, she said, “You truly embody the values of the St. Katharine Drexel National Justice Award.”

In accepting the award Father Paysse quoted from theologian and martyr Friedrich Bonhoeffer who was executed by the Nazis in 1945, “’We are not to simply bandage the wounds of the victims beneath the wheels of injustice. We are to drive a spoke into the wheel itself.’

“For me, St. Katharine Drexel was a true missionary who drove a spoke into the wheel, into the conscience of individuals, of society, but not with force, with Eucharistic love and devotion to Mother Church.”

Also at the Mass was Amy’s brother, Jack, along with his wife Christina and infant baby Katharine. It was Jack who persuaded his family to pray to Mother Katharine to intercede for his little sister.

“It’s really nice to come back,” said Amy Wall, who will soon graduate from Drexel University on a scholarship given to her at the time of the canonization.

“It’s always a pleasure to be here today,” Bob Gutherman said. “It’s something we need to do. We can’t put our faith on a shelf and take it out once a year. It has got to be an active ministry.”

Many of those present for the Mass were long-time devotees of St. Katharine.

For Trudy Brown that connection goes all the way back to 1892 when the sisters established Holy Providence School on the convent grounds. “Three of my grandparents were among the first students,” said Brown, who noted four generations including herself attended schools taught by the Blessed Sacrament Sisters.

Among her most precious possessions are two letters written by St. Katharine herself to Brown’s grandmother.

Very clearly St. Katharine Drexel, who neither sought nor desired personal recognition or glory, remains alive in the hearts of many who were touched by her ministry.

NEXT: Germantown forum discusses the wounds of racism