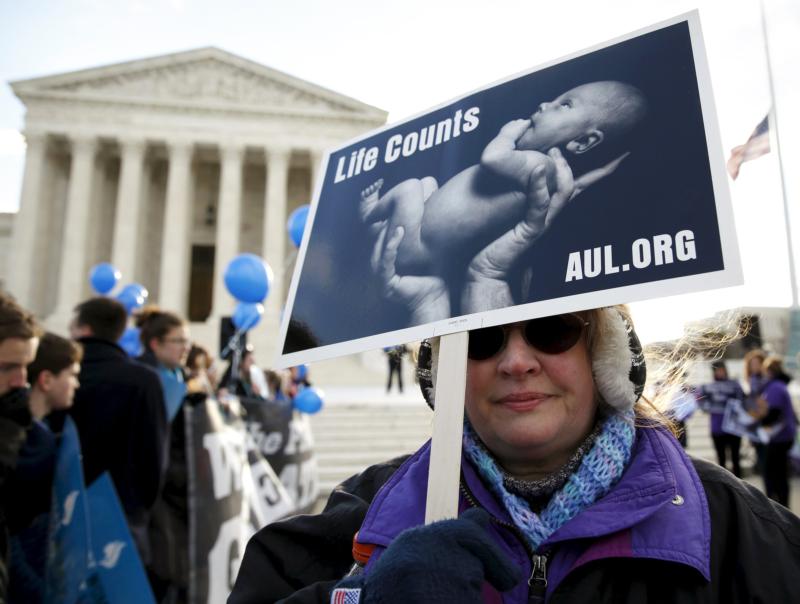 A pro-life supporter holds up a sign in front of the U.S. Supreme Court in Washington March 2 on the morning the court heard oral arguments in a challenge to a Texas law imposing new standards on abortion clinics and requiring abortion doctors to have hospital admitting privileges. (CNS photo/Kevin Lamarque, Reuters)

WASHINGTON (CNS) — The U.S. Supreme Court stepped into some contentious waters March 2 when it heard oral arguments on abortion for the first time in nearly a decade and almost 25 years since it issued a major ruling on abortion.

But even though some time has gone by, the court’s 1992 ruling in Planned Parenthood vs. Casey had a front- row seat during the recent arguments about state requirements on Texas abortion clinics as the “undue burden” test raised in that Casey decision was frequently mentioned in this go-round.

The Casey ruling also may have played a part in questions posed by Justice Anthony Kennedy, the only remaining member of the court that helped write that opinion. And what Kennedy asked or didn’t ask March 2 is being parsed by legal analysts and court watchers alike since he will likely be the deciding vote in the Texas case.

In its previous abortion case in 2007, the Supreme Court ruled 5-4 to uphold the federal ban on partial-birth abortion, signed into law in 2003 by President George W. Bush. The law had withstood several court challenges on constitutional grounds before it was upheld.

In Casey, the justices upheld provisions in Pennsylvania law requiring parental consent for minors, a 24-hour waiting period before an abortion, filing of detailed reports about each abortion and distribution of information about alternatives to abortion. It struck down a requirement that married women need to notify their husbands before having an abortion.

In essence, it ruled that a state may enact abortion regulations that do not pose an “undue burden” on pregnant women.

The phrase “undue burden” was the expression du jour March 2 and essentially the heart of the argument in Whole Woman’s Health v. Hellerstedt, the challenge by Texas abortion clinics to a 2013 state law requiring them to comply with standards of ambulatory surgical centers and their doctors to have admitting privileges at local hospitals.

Opponents of the state regulations say they are aimed at stopping abortions, because they have forced clinics to close, which in turn, they say, puts an undue burden on women seeking abortions who have to travel farther to find an available clinic.

In response to claims the Texas law is an effort to end abortion, Jennifer Carr Allmon, associate director of the Texas Catholic Conference, said in a March 2 statement: “Let’s be clear, we will end legalized abortion in America. But that will be done directly and not through a back door regulatory attempt. Legalized abortion will end because we are winning the hearts and minds of young people in America through common sense and sound science.”

The Texas restrictions were signed into law in 2013, but lower-court orders have prevented them from being fully implemented and in June, the Supreme Court granted a request for an emergency stay, blocking enforcement of the provisions.

Before the Texas Legislature adopted the two new restrictions, there were 41 clinics in Texas that performed abortions, but after the law was passed — and before it was blocked by the high court — that number dropped to 19, and is likely to drop to 10 clinics in the state if the court upholds the law.

If the law is fully enforced, the biggest impact will be in the western and southern part of the state. Currently, a temporary court order allows one clinic in the Rio Grande Valley to remain open while the case is pending.

Last year, the 5th U.S. Circuit Court of Appeals in New Orleans largely upheld the law; so if the Supreme Court issues a split decision, it will uphold the lower court’s decision and affect the three states — Louisiana, Mississippi and Texas — covered by the appeals court, not setting a national precedent.

During the arguments last year before the appeals court, the solicitor general representing Texas said the state’s law didn’t place an “undue burden” on women who wanted an abortion because as he put it: “The undue burden has to require something more than driving distance; people will always have to travel to get an abortion.”

In that same courtroom, Stephanie Toti, the plaintiff’s attorney, emphasized that the law did put an undue burden on women, particularly in West Texas and the Rio Grande Valley. “If a woman in El Paso has to travel 500 miles to get an abortion, that’s an undue burden,” she said.

The issues were still front and center in the March 2 arguments. Justice Elena Kagan said the law could affect hundreds of thousands of women who would have to travel much farther to reach a clinic, and Scott Keller, solicitor general of Texas, said the major metropolitan areas in the state that currently have clinics would continue to have them. He also noted that more than 90 percent of Texas women live within 150 miles of an abortion clinic.

The law puts “heavy burdens on abortion access that are not medically justified,” argued Toti, a lawyer for the Center for Reproductive Rights in New York City referring to clinics that have closed throughout the state just prior to the law’s enactment or right afterward.

According to the Guttmacher Institute, a research group that supports legal abortion, 25 states have laws or policies that regulate abortion providers and clinics that perform surgical abortions that “go beyond what is necessary to ensure patients’ safety.”

In 2015, Arkansas adopted a new restriction that requires only medication abortion providers to have an agreement with a physician who has admitting privileges; the law does not include a similar requirement for surgical abortion providers.

As far as how the Supreme Court court will come down remains to be seen.

Clarke Forsythe, acting president and senior counsel at Americans United for Life, said the court could either reach a 4-4 vote, hold a decision for a later date or send it back to the trial court, which Kennedy mentioned during the oral argument.

“Based on the argument, it did not seem that the abortion clinics would get 5 votes on any ground,” he said in a March 2 statement.

And no matter how the court rules, the battle over this issue will likely continue. As he put it: “We are certainly going to find ourselves in court again arguing over laws to protect women in abortion clinics from immediate and long-term risks.”