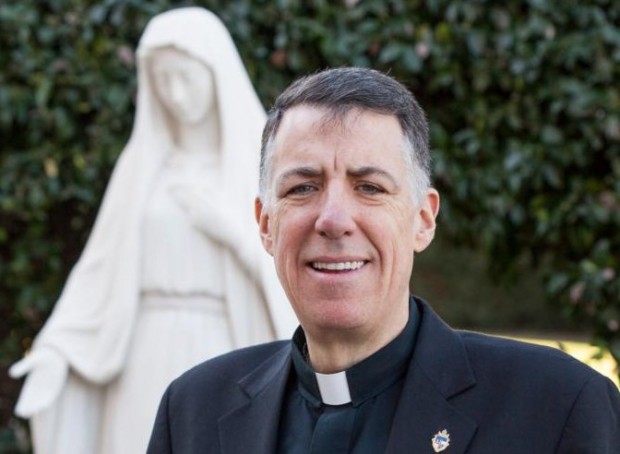 UPDATED — WASHINGTON (CNS) — Pope Francis has accepted the resignation of Bishop Paul G. Bootkoski of Metuchen, New Jersey, and named as his successor Msgr. James Checchio, a priest of the Diocese of Camden, New Jersey.

Bishop Bootkoski is 75, the age at which canon law requires bishops to turn in their resignation to the pope. In January, Bishop-designate Checchio, 49, completed a 10-year tenure as rector of the Pontifical North American College in Rome.

The changes were announced in Washington March 8 by Archbishop Carlo Maria Vigano, apostolic nuncio to the United States.

Bishop-designate Checchio will be ordained a bishop and installed as the fifth bishop of Metuchen May 3. Until then, Bishop Bootkoski will oversee the diocese.

At a morning news conference in Metuchen, Bishop Bootkoski welcomed his newly named successor and referred to well-known remarks by Pope Francis that Catholic bishops and priests must go out among their flocks and know the people they serve like “shepherds living with the smell of their sheep.”

“God’s grace comes alive and flourishes to the extent that clergy are among their flocks giving themselves and the Gospel to others,” Pope Francis has said.

“As I look at the mission of serving others and the vibrancy of the American seminary in Rome, where our new bishop comes from,” Bishop Bootkoski told reporters, “it seems these men indeed are learning how to be shepherds living among their sheep, “with the smell of their sheep.”

“As a priest of nearly 50 years, it is very heartening to see this new generation of priests taking our Holy Father’s message to heart,” he said, adding that he believes Metuchen Catholics “are going to be in very good hands” with Bishop-designate Checchio, leading the way.”

“Plus, he’s a Jersey guy like me, so perhaps I am biased,” Bishop Bootkoski said.

Bishop-designate Checchio said that when he finished his tenure as seminary rector in Rome, he began a sabbatical that was to run until July. His plan, he said at the news conference, was to spend time with some family and friends, go on retreat, then do some writing on seminary formation, and finally study Spanish in preparation for becoming a pastor in my home diocese.”

Those plans changed, while he was in rural Minnesota with some lay and priest friends. He said he was getting ready to go ice fishing, but first decided to retrieve his phone messages; the cellphone reception wasn’t too good, so his calls were going to voice mail. That’s when he learned he had gotten a call from Archbishop Vigano.

He called the archbishop back and learned of his appointment.

“After we hung up, I knelt down next to the bed and before a crucifix and said a prayer to Our Lady for the priests and faithful of the Diocese of Metuchen and to ask for her protection and assistance for me,” Bishop-designate Checchio told reporters. “I then got up, joined my friends and off we went ice fishing. I pray that I will be more successful as a bishop than I was at ice fishing.”

Describing himself as “touched by a bit of holy fear,” Bishop-designate Checchio said: “I am certainly humbled to become the shepherd of this wonderful diocese, and I look forward to striving to fulfill the demanding task of ensuring that the pastoral charity of Jesus Christ continues to be abundant here in Metuchen. I promise you my prayers and my commitment to serve to the best of my abilities.”

“So I am very much aware of my own deficiencies but at the same time encouraged to be taking on this office during this great Jubilee (Year) of Mercy,” Bishop-designate Checchio said. “I’m likewise inspired by the wonderful example of our Holy Father, Pope Francis, who sets such a high and challenging standard for us.”

Archbishop John J. Myers of Newark, New Jersey, praised Bishop-designate Checchio for his leadership and skills as “an educator and formator” at the Pontifical North American College.

(“He) has deepened in the hearts and minds of the many seminarians at the college an awareness of the meaning and challenges of priesthood through theological studies, spiritual formation including prayerful reflection on the revealed word of God and the tradition of the church and its meaning for the modern world, and a variety of pastoral service opportunities,” Archbishop Myers said in a statement.

Under the newly named bishop’s leadership, “the college and its affiliated institutes have grown significantly and are thriving,” added the archbishop, who is chairman of its board of governors.

“I know him to be a very spiritual and able man, a leader and a good and generous priest who loves the priesthood and priests,” added Archbishop Myers. He also thanked Bishop Bootkoski for his leadership and care of the people of the Metuchen Diocese for 14 years and before that his 36 years of ministry within the Archdiocese of Newark, where he was ordained a priest and served as an auxiliary bishop.

Born April 21, 1966, in Camden, Bishop-designate Checcio earned a bachelor’s degree in philosophy from the Jesuit-run University of Scranton, Pennsylvania, in 1988. He pursued seminary studies at the Pontifical North American College. He was ordained a priest June 20, 1992.

He holds a licentiate and a doctorate in canon law from Rome’s Angelicum University.

In 2003 he became vice rector for administration at the Pontifical North American College, then was named rector in 2006. St. John Paul II named him a monsignor in 2000; Pope Benedict XVI named him a prelate of honor in 2011.

NEXT: Alabama conference examines depth of black-white divide in U.S.