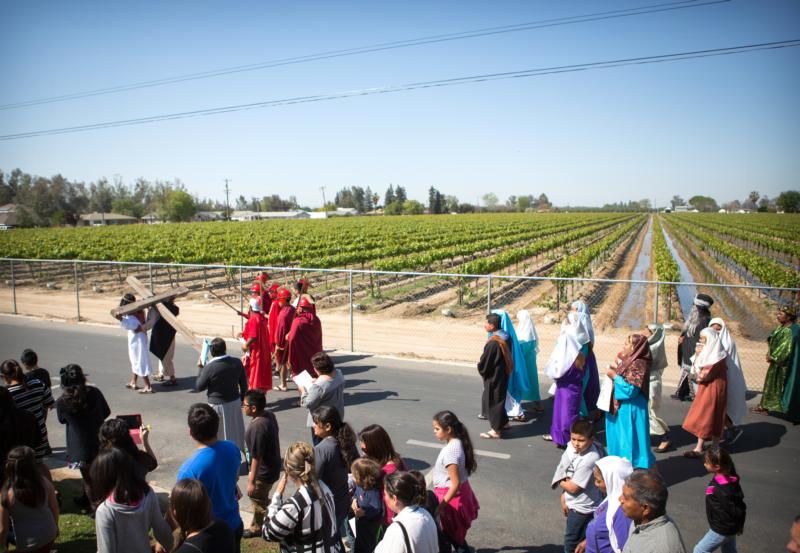 A person carrying a cross leads the Way of the Cross procession on Good Friday in the Diocese of Fresno, Calif., in this April 3, 2015, photo. The tradition of a living Stations of the Cross is especially strong in the diocese's migrant communities. (CNS photo/Rich Kalonick, Catholic Extension)

KINGSBURG, Calif. (CNS) — Every year on Good Friday, Catholic communities throughout the world re-enact the Way of the Cross with live performances of the story of Christ’s final journey of his earthly life as a powerful reminder of his suffering and sacrifice.

This traditional Catholic Lenten devotion is based on the 14 significant events of the Crucifixion — beginning with Christ’s sentencing, continuing with his carrying the cross through Jerusalem and ending with his burial.

In the Diocese of Fresno, several parishes stage their own versions of living Stations of the Cross with colorful costumes, long processions and large crowds of pilgrims and onlookers.

The tradition is strong in two towns, Kingsburg and Easton, both of which have significant migrant populations.

Last year, the procession in Easton had more than 400 participants, many of whom were day laborers who had to sacrifice their daily wages to attend. Alberto Varela, who played the role of Jesus, has participated in the event three times.

“The procession brings us all together, helps us become a solid community and builds our faith,” he told Catholic Extension magazine.

Father Jerry Amerando, pastor of St. Jude Church in Easton, welcomes everyone to the living Stations of the Cross with a blessing, “I ask God to guide and keep you so that you can carry your cross as he did.”

In Kingsburg, many of the performers and participants are migrant workers. The town is the headquarters of Sun-Maid, the largest raisin and dried-fruit processor in the world.

The Hispanic ministry coordinator for the Diocese of Fresno, Brenda Noriega, whose salary is funded through Catholic Extension’s Hispanic Lay Leadership Initiative, works with parishes throughout the diocese, including Kingsburg and Easton, to strengthen migrants’ connection to the Catholic Church. Her office also supports the Good Friday processions.

“This procession is part of our Hispanic traditions,” she said. “When the Spaniards evangelized, they used symbols. They made Catholicism very tangible.

“We like our faith to be visual,” she added. “We want to be in the moment. When we participate in the Way of the Cross, we become part of Christ’s crucifixion.”

She believes that the procession is a tool to share Christian values, particularly with younger generations. They get to see Christ’s story in real life.

It is a time for deep reflection. “When I attend, I am transported back 2,000 years. I get to imagine what I would have done if I had been there,” she said. “I am also reminded that in choosing to follow Christ, we will face suffering. Standing up for God’s kingdom and serving his people involves sacrifice.”

“But just as Christ showed us by dying on the cross,” she added, “it’s a price I’m willing to pay.”

PREVIOUS: Stations of the Cross for deaf help them follow story of Jesus’ passion