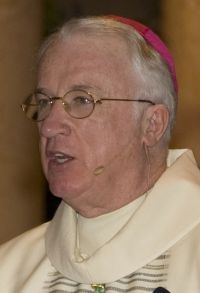 “The West Virginia Legislature and the pro-life people in our state have been very strong in showing their support for the protection of human life,” Bishop Michael J. Bransfield of Wheeling-Charleston said in a statement.

“I commend all those who have worked so hard not only in the passing of this bill, but to override the governor’s veto as well,” he said.

Tomblin vetoed the bill March 9. The next day, the House of Delegates voted 85-15 to override the veto and the Senate voted 25-9. If the law is unchallenged, the ban will go into effect in May.

“To allow this in our society is unbelievable, especially when medical technology gives us a clear picture of the living child — a child able to experience pain — inside the womb,” Bishop Bransfield said in a statement following the Legislature’s passage of the bill in February. “To allow it to go on is one of the most selfish dimensions of our society. I commend all those who have worked so hard in the passing of this bill.”

“We are extremely grateful for the pro-life leadership and legislators who voted to override the governor’s veto, therefore voting to protect West Virginia’s unborn children from this barbaric dismemberment procedure,” Franz said.

This is the second time the state Legislature has overridden Tomblin’s veto of an abortion ban.

Last year, lawmakers overrode his veto of the Pain Capable Unborn Child Protection Act, which bans abortions 20 weeks after conception. That was the first time in almost 30 years the Legislature voted to override a governor’s veto.

PREVIOUS: Daughters of St. Paul launch novena to tie into ‘The Young Messiah’

NEXT: Michigan Catholic employees can add housemate to insurance