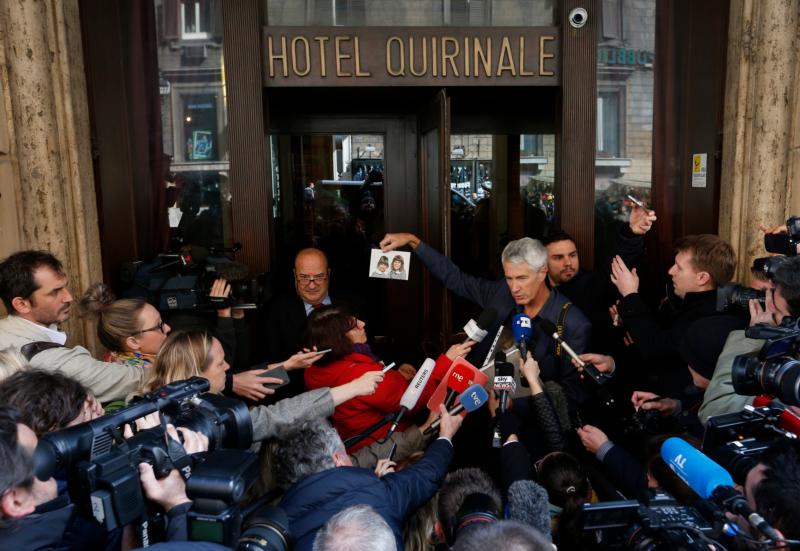 Anthony Foster holds a picture of his daughters Katie and Emma, who were raped by a priest in Melbourne, Australia, as he speaks with media in front of the Hotel Quirinale in Rome March 3. Foster was at the hotel as Australian Cardinal George Pell was testifying via video link from the hotel to Australia's Royal Commission Into Institutional Responses to Child Sexual Abuse in Sydney. (CNS photo/Paul Haring)

“One suicide is too many. And there have been many such tragic suicides. I commit myself to working with the group to try to stop this so that suicide is not seen as an option for those who are suffering,” he said March 3 after meeting in Rome with a group of survivors from his hometown of Ballarat.

The closed-door meeting came after the survivors watched the cardinal give evidence over four days to Australia’s Royal Commission about what he knew about the actions of child abusers among clergy and about bishops reassigning them to other parishes during his tenure in Australia. A number of survivors and supporters had come to Rome thanks to a crowd-funding campaign in order to witness in person the cardinal’s testimony, which was delivered over a live video link-up with the commission in Australia.

The cardinal, prefect of the Vatican Secretariat for the Economy, had admitted during the hearings that church leadership “has made enormous mistakes” in confronting suspected and known abuse against minors. Hundreds of child abuse claims or complaints have been made against clergy in the Archdiocese of Melbourne and the Diocese of Ballarat, the cardinal’s hometown and the diocese for which he was ordained in 1966.

“It would be marvelous if our city had become well-known as an effective center and the example of practical help for all those wounded by the scourge of sexual abuse,” he read from his written statement while standing outside the Hotel Quirinale, where the meeting and his previous testimony took place.

He said that during his meeting with survivors, he heard “their stories and of their sufferings. It was hard; an honest and occasionally emotional meeting.”

He said he was “committed to working with these people from Ballarat and surrounding areas” and was willing “to help make Ballarat a model and a better place of healing, for healing, and for peace.”

He promised to continue to help the group work with church agencies in Rome and at the Vatican, especially the Pontifical Commission for the Protection of Minors. He helped arrange for some of the victims to meet with the commission earlier that same day.

He also said he supported plans to look into the possibility of creating “a research center to enhance healing and to improve protection.”

Earlier, the cardinal had said he was hoping to facilitate a possible meeting between Pope Francis and the survivors, who were set to fly back to Australia March 4.

After the meeting with Cardinal Pell, one survivor from Ballarat, Phil Nagle, told the Catholic Herald that they “talked about the future not the past. … I think he gets it.”

Nagle said they discussed the importance of counseling and care for survivors and how the church “from (Cardinal) George’s level down” would help with that.

David Ridsdale, whose uncle — a former priest — abused him and others, told reporters March 2 that people should “never underestimate broken people.” Gerald Ridsdale, who is now in prison, had lived in the same house with the cardinal for a few years in the 1970s.

With their presence in Rome and long years of advocacy work, “I hope we’ve shown everyone that when you face the truth with dignity you really can achieve so much,” David Ridsdale said.

“I think what we’ve been through over the years, all of us, to have pulled together, to pull this off, is a testament: don’t ever underestimate broken people,” he said.

When people notice someone who seems to be in need or hurting, “stop the judging. Pick them up like we picked each other up because that is how humanity is going to go forward. Not this hiding, not this power struggle, not this power imbalance,” he said.

NEXT: Church reconstruction in Haiti continues after election violence lull