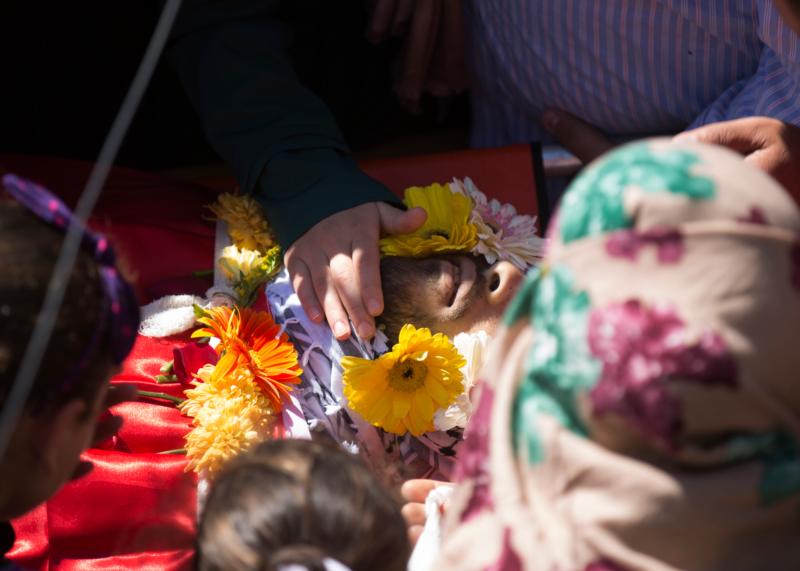 Palestinians mourn the death of Iyad Omar Ssjadiyya during his funeral at a refugee camp in Qalandia, West Bank, March 1. He was killed during an Israeli operation to rescue two soldiers who had entered the camp in their military vehicle. (CNS photo/Atef Safadi, EPA)

JERUSALEM (CNS) — The church must speak out against the continuing Israeli-Palestinian violence and remind people of their responsibilities, said representatives of the Catholic ordinaries of the Holy Land.

They also said the root cause of the problem is the Israeli occupation of Palestinian lands, which only the Israelis can bring to an end.

“We are called to speak out again and again. We have no political or military force, but we do have voices to be used to name things by their name and to call to responsibility. We have the responsibility to remind one and all that we are all human beings. We mourn every death by violence from both sides. We need to constantly renew the dream that there can be justice and peace for all,” the Commission of Justice and Peace of the Assembly of the Catholic Ordinaries of the Holy Land said March 22.

“We repeat again that we, as disciples of Christ, condemn violence on all sides. Violence is violence and only begets more violence. We, as created in the image and likeness of our Father, need to learn another way to solve the conflict,” the commission added.

In the statement titled “Beyond Occupation and Confrontation Toward a Common Understanding,” the Catholic leaders noted that while some people seek dialogue and ways toward peace, the politicians are continuing to make decisions that “strengthen separation, discrimination, exclusion and exile,” which lead to hopelessness and violence, especially among the youth, who feel they have nothing to lose and no future.

“The only way to end supposed incitement and teaching new generations about the ‘enemy’ is to end occupation. Only the occupier can do that,” they said. “It is only ending the occupation that will ultimately put an end to violence, the violence of the occupier and the occupied alike.”

“We believe in a kingdom of God that is already among us and not yet manifest,” they said. “In this kingdom, there are no enemies, but only brothers of one loving Father. In this kingdom, there are no borders, no walls, no fences but only one holy land in which people talk peace with one another. We refuse to be silent and we refuse to stop hoping.”