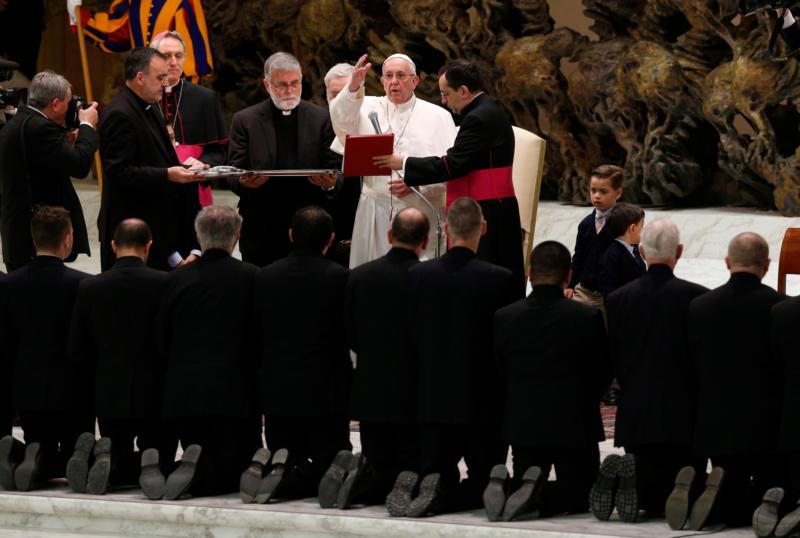 Pope Francis blesses priests during an audience with members of the Neocatechumenal Way in Paul VI hall at the Vatican March 18. The movement was preparing to send priests and 250 families on evangelization and education missions to every continent. (CNS photo/Paul Haring)

VATICAN CITY (CNS) — The church is holy, but the devil loves to tempt its human members to be proud and judgmental, which sows division, Pope Francis told members of the Neocatechumenal Way.

“The enemy of God and man, the devil, cannot do anything against the Gospel, against the humble power of prayer and the sacraments, but he can do great harm to the church by tempting our humanity, provoking presumption, judgment of others, closure, divisions,” the pope said March 18.

Meeting with the pope at the Vatican, the Neocatechumenal Way was preparing to send priests and 250 families out on missions of evangelization and education to every continent. The Neocatechumenal Way guides members in an itinerary of exploring the meaning of their baptism and learning to live according to its promises.

Pope Francis asked the families going on mission to show respect, love and openness to all they meet and to do so by being “familiar with the cultures, languages and local customs, respecting and recognizing the seeds of grace that the Spirit already has sown.”

“God is not attracted by worldliness, in fact, he detests it,” the pope said. “But he loves the world he created and loves his children just as they are, where they live, even if they are ‘far off.'”

With respect and love for others and for their identities, he said, the missionaries will give witness to and preach a living, life-giving Gospel message that is attractive and has meaning for every individual.

“Unity, humility and obedience” must characterize every Catholic movement and organization, he said. The devil, “the divider,” tries to make people think that “we are good, maybe better than others. In that way, the ground is ready for him to sow discord.”

Individuals and groups are purified, he said, through obedience to the church and its pastors.

“The church is our mother,” he said. “It is not an organization that seeks adherents or a group that goes forward following the logic of its own ideas, but it is a mother who transmits the life received from Jesus.”

NEXT: Christians concerned with Israeli restrictions for Holy Week, Easter