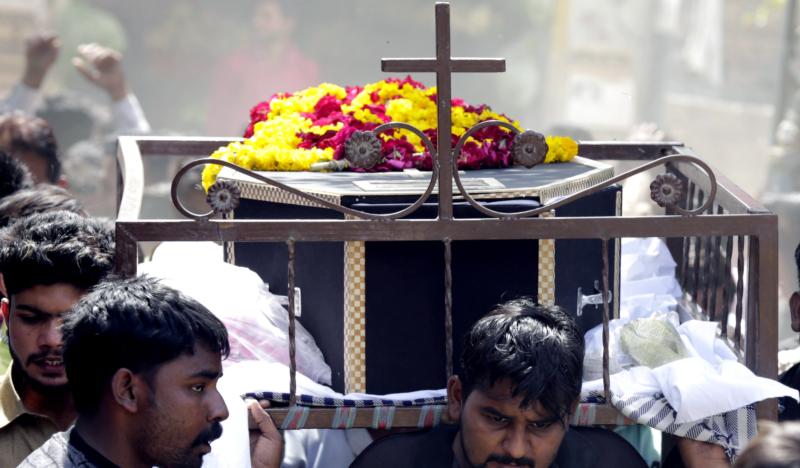 People carry a coffin March 28 after the previous day's suicide bomb attack at a park in Lahore, Pakistan. Observers say the terrorist attack that killed more than 70 people in a Lahore park on Easter was not the first time that Christians in the Islamic country have been targeted. (CNS photo/Rahat Dar, EPA)

KARACHI, Pakistan (CNS) — The terrorist attack that killed more than 70 people in a Lahore park on Easter was not the first time that Christians in the Islamic country have been targeted, and observers say that, as things stand, it will not be the last time.

The Asian church news portal ucanews.com said this is largely because discriminatory laws, the state’s patronage of militants groups, deep-rooted intolerance and chronic ignorance give rise to incidents of persecution in Pakistan, “making it a living hell for the minority Shia Muslims who, along with Christians, Hindus and Ahmadis, became the prime target of Sunni extremists.”

Several incidents occurred since the United States attacked Afghanistan in 2001. The deposed fundamentalist Islamic regime of Afghanistan has many supporters across the border in Pakistan. Most Pakistanis view the United States and West European countries as Christian, and Muslim militants consider Pakistani Christians to be associated with those “Christian nations.”

Pakistan, carved from British India, was created in 1947 after Muslims of the Indian subcontinent called for a separate homeland. Although Muhammad Ali Jinnah, the nation’s founder, said citizens may belong to any religion, a resolution proclaiming that the future constitution of Pakistan would be modeled on the ideology and principles of Islam was kept as a preamble of the constitution. In 1985, when it was made an integral part of the constitution, Pakistan became an Islamic republic, and the Council of Islamic Ideology and the Shariah (Islamic) court were established.

Many Islamic laws were passed, including blasphemy laws and the Hudood Ordinance (Islamic criminal code), reported ucanews.com. Christian leaders have long campaigned against the misuse of blasphemy laws that have led to incidents of mob violence. The law mandates that anyone who “blasphemes” the Quran is to be handed a death sentence.

Shahbaz Bhatti, the federal minority affairs minister, was murdered in March 2011 by Islamist gunmen after he spoke out against Pakistan’s blasphemy laws.

In recent years, Christians were targeted in terrorist attacks that left hundreds dead.

Two bomb blasts at churches in Lahore in March 2015 killed 14. A twin suicide bomb attack at a Peshawar church in 2013 left around 80 dead. In 2009, at least 40 houses and a church were burned by a mob in Gojra, with eight people burned alive.

In 2005, a mob claiming Christians had burned pages of the Quran forced hundreds of Christians to flee their homes in Faisalabad; churches and Christian schools were set on fire.

More than 95 percent of Pakistan’s 180 million people are Muslims. Less than 2 percent are Christians, Hindus and other religious minorities.

Catholic educators have long maintained that the textbooks used are written with “a biased mindset” by Muslim writers who do not make allowances for the teachings of religions other than Islam.

The Catholic Church, which operates more than 500 schools, has often criticized the syllabus for praising only Islamic personalities while presenting followers of other religions as infidels and depicting Christianity negatively.

Moreover, textbooks — even science texts — quote excessively from the Quran, ucanews.com reported. It said church officials have raised the particular concern that minority students’ unfamiliarity with these texts could leave them open to accusations by people exploiting the country’s blasphemy laws.

Activists and members of the Christian community say around 5,000 Christians have fled Pakistan because of threats, persecution and lack of security.

Many of them have sought asylum in Thailand and Sri Lanka. Some representatives in the Christian community say there are 10,000 registered Pakistani asylum seekers between the two countries, ucanews.com reported.

NEXT: Vatican’s U.N. nuncio lauds role of women in peacebuilding