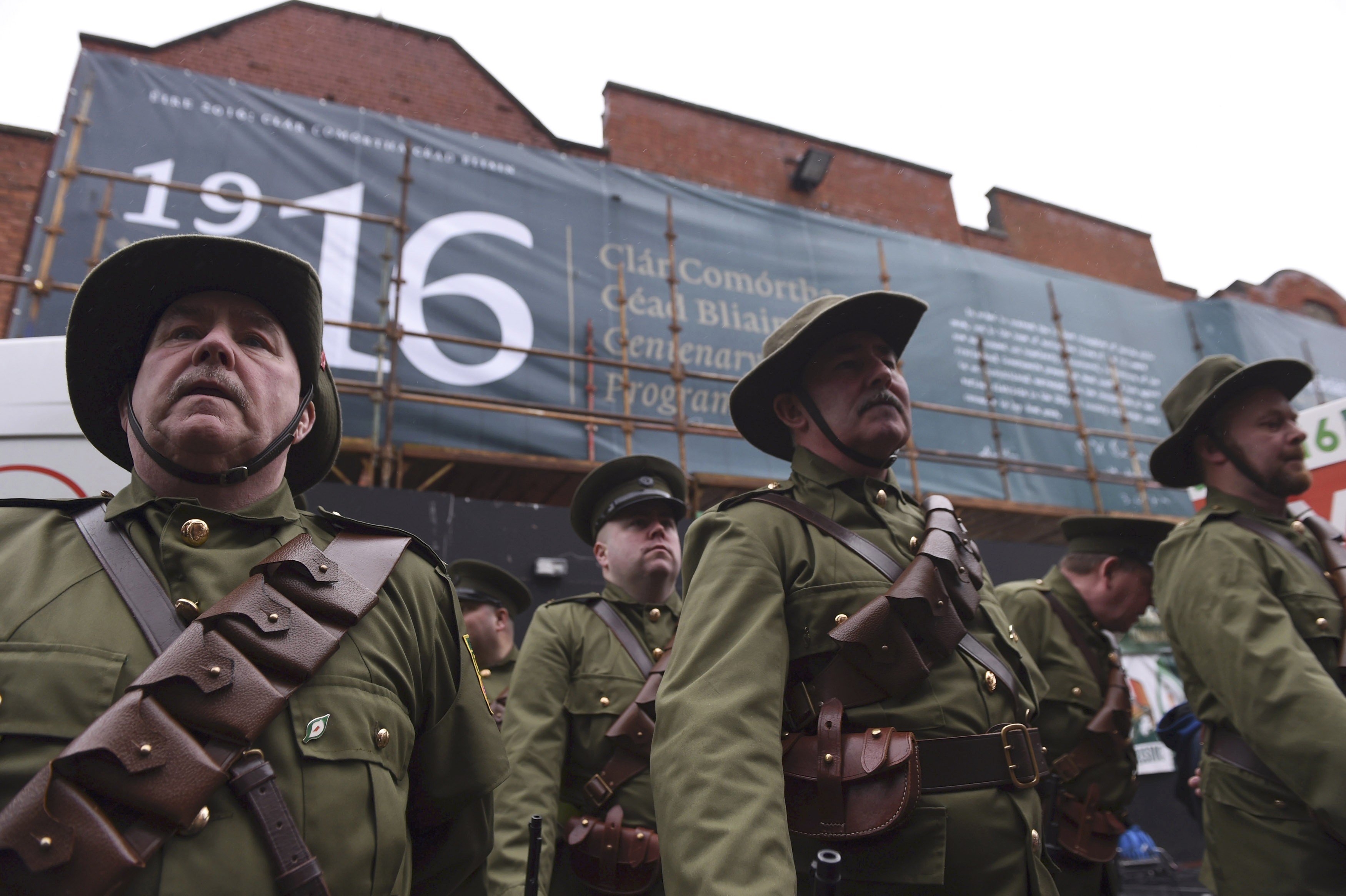 Members of the Finglas 1916 commemoration group attend a Sinn Fein rally to save Moore Street in Dublin Jan. 31. Ireland's political system emerged from the rubble of the anti-British 1916 Easter Rising, which is marking its centenary this year. (CNS photo/Clodagh Kilcoyne, Reuters)

DUBLIN (CNS) — Easter Monday 1916 was a sunny day. Patrick Pearse, a young poet and teacher, stood in front of the General Post Office on O’Connell Street in Dublin and, to the astonishment of passers-by, began to read: “Irishmen and Irishwomen: In the name of God and of the dead generations from which she receives her tradition of nationhood, Ireland, through us, summons her children to her flag and strikes for her freedom.”

Around the city, copies of the Proclamation of the Irish Republic were posted on buildings, declaring Ireland a sovereign state, guaranteeing fundamental rights and declaring a provisional government, pending elections by all the people, men and women.

This year marks the 100th anniversary of the Easter Rising, as it was known. The six-day insurrection by Irish rebels against British rule has divided Ireland for a century; some see the rebels as martyrs, others as leaders of a treacherous revolt.

(Read about plans this year to commemorate the event.)

“What happened developed out of a huge ferment that included the Gaelic language revival, the explosion of what’s sometimes called Anglo-Irish literature, along with both a strong nationalist party under (John) Redmond and, of course, a secret wing, the Irish Republican Brotherhood that wanted independence by violence,” said Irish Father Brendan Purcell, adjunct professor of philosophy at the University of Notre Dame Australia. 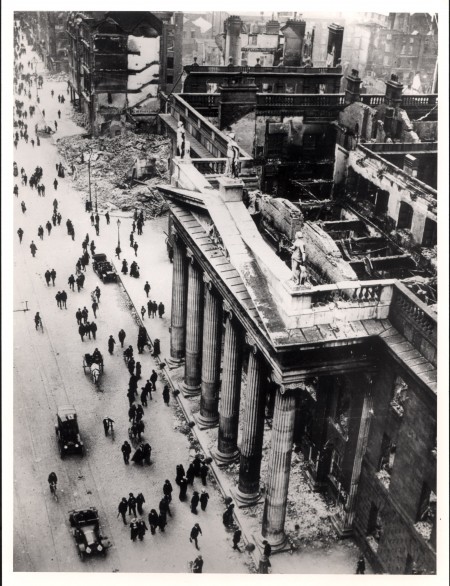 The damaged Dublin General Post Office is seen in a photograph taken after the Easter Uprising of 1916. The six-day insurrection by Irish rebels against British rule divided Ireland for a century. (CNS/Bridgeman Images)

“Many of the 1916 leaders were personally devout Catholics — maybe (nationalist leader) Joseph Plunkett was a mystic too, so they linked their insurrection to Easter as if it were a religious event, too.”

“Unfortunately, the independence that resulted didn’t really include a religious development in itself,” said Father Purcell, although he noted Irish Catholicism was strong at the time.

The Rising began April 24, 1916, when diverse republican groups, acting together, seized a number of prominent buildings in Dublin, raised the green, white and orange flag over the post office and holed up. For six days 1,600 rebels fought off a 20,000-strong British army. On April 29, Pearse called a surrender “to prevent the further slaughter of Dublin citizens.”

The insurrection left around 500 dead, mostly civilians, and thousands injured. Approximately 1,500 Irish men were interned in Wales, while the 16 rebel leaders were imprisoned and executed. Dublin’s city center lay in ruins. 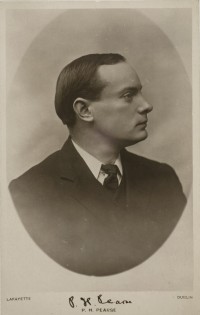 “People will say hard things of us now, but later on they will praise us,” Pearse wrote on his execution day. His words proved prophetic. The executions galvanized public opinion. In the 1918 British Parliament elections, nationalists won 70 percent of the Irish seats. After those elections came a wider armed campaign against British rule, the War of Independence, which ended with the signing of the Anglo-Irish Treaty in 1921. The Treaty split the nationalist movement and led to a civil war and the partition of Ireland.

Former Irish Prime Minister John Bruton said the Rising was not a “just war” because, in time, Britain would have delivered home rule for 26 counties and many lives would have been saved. “Living for Ireland is better than dying for Ireland,” he said in his 2015 book, “Faith in Politics.”

However, the rebel leaders and others were convinced they did right. It was “a sacrifice which God asked of me,” wrote Pearse.

The primate of all Ireland, Archbishop Eamon Martin of Armagh, Northern Ireland, has urged people to redouble “efforts to find safe spaces where we can hear one another’s stories and pain, and bolster friendship, justice and peace.”

“Catholics should care about the Rising,” said Capuchin Father Bryan Shortall. “I learned about this at the fireside with my siblings. We need to pay tribute to this history.”

PREVIOUS: Centenary of Easter Rising will cause traffic restrictions in Dublin