Mideast patriarchs plead for peace, urge hope in the resurrection 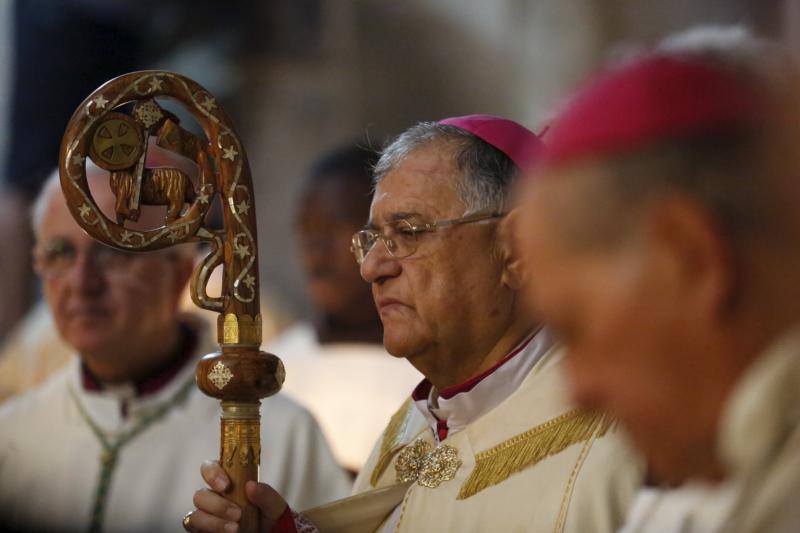 BEIRUT (CNS) — Catholic patriarchs of the Middle East, in their Easter messages, pleaded for peace and urged their faithful to regard the risen Christ as a sign of hope.

Lebanese Cardinal Bechara Rai, Maronite Catholic patriarch, said the world — particularly the “political community and the rulers of nations” — badly needs “witnesses to the resurrection.” He called for the resurrection of “humanity, justice and peace” in his Easter message.

Pointing to the turmoil in the region, Cardinal Rai said that “regional and international political powers are imposing devastating wars” in the Middle East, particularly in the Palestinian territories, Iraq and Syria. These powers, he said, “kindle the fire” and fund and supply the wars in the Middle East with weapons “and send them terrorists and mercenaries … for political purposes, economic interests and strategic objectives.”

The cardinal stressed that “Lebanon can preserve its identity by remaining neutral and steering clear of regional and international axes.”

Chaldean Catholic Patriarch Louis Sako of Baghdad said “the situation in this part of the world is exceptionally tense, the country is divided, parts of it are still occupied by the Islamic State and the most painful thing is seeing that every coalition is divided due to conflicts over interest and leadership.”

He called for “serious dialogue, openness and honesty” to achieve national reconciliation, unity, partnership and peace. This, Patriarch Sako said, “is the only way to stop the interference of both internal and external powers, who are seeking to invest and benefit from our conflicts.”

“We Christians, while concluding our Lent, pain and cross of these difficult days … are called not to keep looking at our wounds and lose hope” but, instead, to celebrate the Resurrection “as our most beautiful and joyful feast,” Patriarch Sako said.

He urged the faithful “to rely on wisdom and patience and to stay united together on the land where we were born (and have) lived for 1,400 years together with Muslims, sharing one civilization.” He said he hoped for “a real resurrection, a quick return of displaced to their homes, and a restoration of peace at our churches, country and the whole world.”

In an Easter homily in Jerusalem’s Church of the Holy Sepulcher, Latin Patriarch Fouad Twal said that, like the women who found Christ’s empty tomb, Christians “allow ourselves to be anxious, fearful of the emptiness and absence; but let us not be overcome by fear.”

He directed a message of hope and prayer to the sick, elderly, refugees and prisoners, to the “victims of indifference and isolation and those living the Good Friday, and to those who can still love the joy of Easter but cannot spread the Good News because of thoughtless policies and blind fanaticism.”

Referring to the recent bombings in Belgium last week, Patriarch Twal asked Bruno Jans, consul general of Belgium in Jerusalem, who attended the Mass, to convey condolences and prayers to his people and government.

“Through you, we say, it is all of us around the world whose hearts are pierced by this tragedy,” he said. “For you all, we raise our prayers so that the hope of the Resurrection can heal your wounds and console your broken hearts.”

In Beirut, Syriac Catholic Patriarch Ignace Joseph III Younan said, “Peace today is what we, Christians of the Middle East, really need and strive for.”

“Peace is so meaningful today for our Syriac church and for people enduring persecutions during the centuries and most particularly in recent times at the hands of the barbarians of the 21th century,” the Syrian-born patriarch said, citing attacks in 2010 and 2014.

Patriarch Younan urged the faithful “to never doubt the saving power of the Lord resurrected and to never lose hope, just as our courageous forefathers and mothers have long taught us for centuries.”

“By his death, Jesus conquered sin and death,” Patriarch Younan said, adding that “he will grant his little flock the long-awaited peace.”

“Despite all kinds of hardship endured because of your forced migration — either to Lebanon, Jordan or Turkey — we will continue to pray with Pope Francis in the Year of Mercy, beseeching God, father of all mercies, to have mercy on all of us, that the world, particularly the Western nations may believe,” Patriarch Younan said.

Syrian-born Melkite Catholic Patriarch Gregoire III Laham in Damascus said, “Today, after five years of violence, war, destruction and bloodshed, the world discovers that the roads of Damascus, Jerusalem and Palestine are connected as they are the roads of faith, civilization and heritage.”

He pointed to the liturgical prayer, “Come, O faithful, to receive the Resurrection,” saying: “This is our hope for our suffering Eastern region as it emerges from the painfully long Way of the Cross — especially in Iraq, in Syria, in Palestine, in Lebanon, Egypt, Libya, Yemen — for this whole wounded region, resurrection joy.”