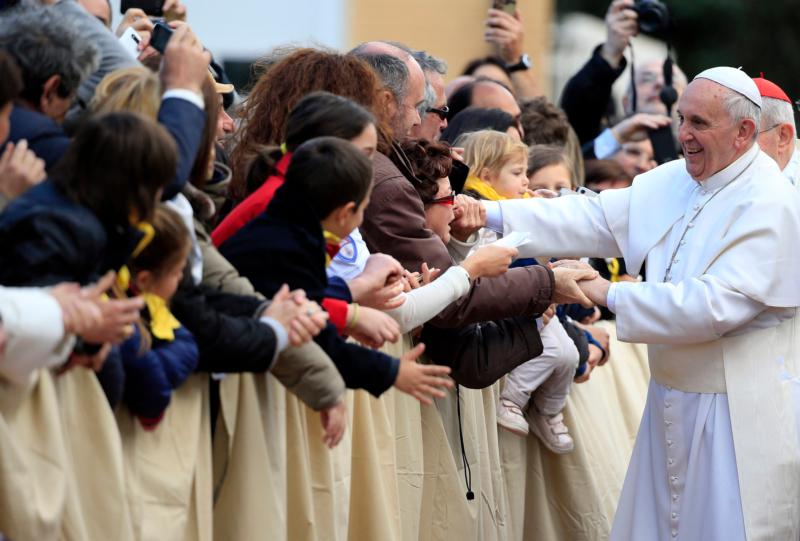 Pope Francis greets the faithful as he arrives at the Our Lady of Providence Center in Rome April 17, 2015. Vatican officials announced the pope will celebrate the Holy Thursday Mass of the Lord's Supper with young refugees in Castelnuovo di Porto, about 15 miles north of Rome. (CNS photo/ Tony Gentile, Reuters)

“Washing the feet of the refugees, Pope Francis is asking for respect for each one of them,” wrote Archbishop Rino Fisichella, the main organizer of the Vatican’s Year of Mercy initiatives.

Announcing the location for the pope’s celebration March 24, Archbishop Fisichella noted that many of the young people at the Center for Asylum Seekers are not Catholic, which makes Pope Francis’ decision to wash their feet “even more eloquent.”

“It indicates respect as the main path to peace,” he said March 22. Respect means recognizing the other as a person, one who “walks with me, suffers with me, rejoices with me.”

“Pope Francis will bow down and wash the feet of 12 refugees as a sign of service and attention to their condition,” the archbishop said.

With tens of thousands of people fleeing persecution and violence in many parts of the world, too many countries seem to think the best solution “is to close their borders to feel safer or to build new walls,” the archbishop said.

But one of the traditional “corporal works of mercy” is to welcome the stranger, Archbishop Fisichella wrote in an article for the Vatican newspaper. “Welcoming refugees then becomes for Christians a tangible expression of living the Jubilee of Mercy.”

NEXT: Church officials dismiss rumors that kidnapped priest will be crucified