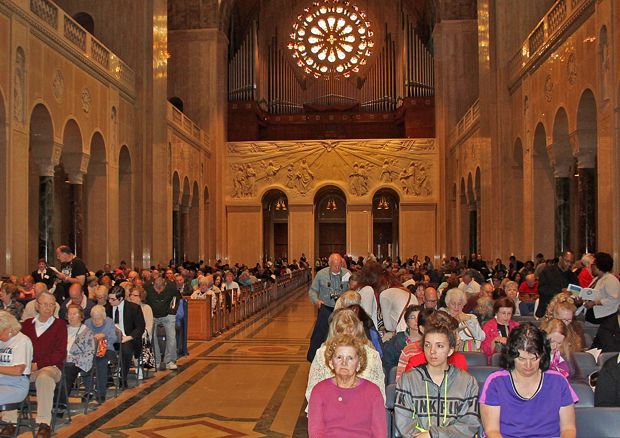 Faithful from the Archdiocese of Philadelphia pray together April 23 during the archdiocesan pilgrimage to the Basilica of the Shrine of the Immaculate Conception in Washington, D.C. (Photo by Lou Baldwin) 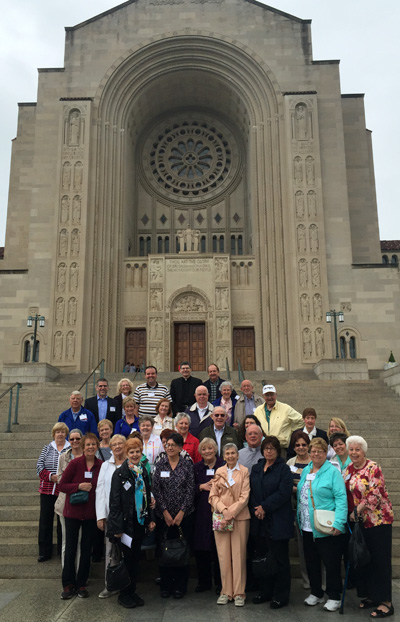 Philadelphians had quite a lot to do with the building of the shrine, which is the largest Catholic Church in the Americas, starting with Cardinal Dennis Dougherty who chaired the building committee and continuing with support by Philadelphia’s archbishops ever since.

The pilgrimage was held Saturday, April 23, and included an opening prayer service conducted by Father Dennis Gill, who oversaw the pilgrimage. There was also a traditional procession, crowning of a statue of the Blessed Virgin Mary led by Bishop Michael Fitzgerald, a rosary led by Bishop Timothy Senior and a solemn Mass with Archbishop Charles J. Chaput as celebrant and homilist.

Because this is the Year of Mercy, the title of the Mass was “Holy Mary, Queen and Mother of Mercy.”

In his homily, Archbishop Chaput said, “Mary is the most perfect of human beings. When we say that Mary is the Queen of Mercy we mean she is the one who embodies the quality of mercy we see in God more than the rest of us.”

Curiously, the quality of mercy is not the first thought that may come to mind when looking at the somewhat stern-looking mosaic of Christ in Majesty that dominates the wall of the north apse behind the altar. But it is certainly awe inspiring, and at the time of its creation it was considered possibly the largest mosaic in the world.

Other beautiful mosaics cover the two smaller domes in the basilica and scaffolding is in place to install a massive mosaic on the largest dome over the transept, according to Msgr. Walter Rossi, the director of the shrine. This is just the latest of the many loving additions to the shrine over the years.

What is perhaps most notable are the many side chapels and shrines throughout the huge basilica, most of them honoring the Blessed Mother as she is venerated in countries around the world. Each is a visual invitation for meditation and prayer.

“I think every time I come there is a new mosaic or a newly embellished chapel, and you see the cultures of the world here,” said Bishop Fitzgerald, who also assisted with the long lines of pilgrims going to confession. “It renews my devotion to the Blessed Mother. In this year of mercy you see the direct connection between Divine Mercy and the Blessed Mother.” 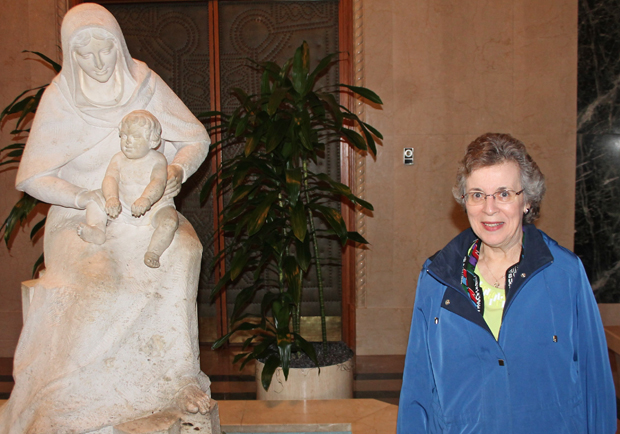 Rosemary Horstmann, a veteran of past Philadelphia pilgrimages, stands at the Irish Chapel, one of her favorite of the side chapels at the National Shrine. (Lou Baldwin)

For Rosemary Horstmann, who visited the Irish Chapel located at the ground level of the 328-foot bell tower, that is a special place. “It’s magnificent,” she said. “It was donated by John and Mary McShain. He was my husband’s aunt, and Aunt Mary was his godmother. I am so glad we have it here.”

She might have added John McShain was a Philadelphian and the contractor who built the shrine. He also built many of the public buildings in Washington including the Pentagon, but would declare the National Shrine was the fulfillment of his life’s ambition.

The archdiocesan pilgrimage was a first visit for Ron and Kitty Leva, along with their son Eric, down from St. Gabriel Parish in Philadelphia. “We’ll be back because you can’t see everything in one day,” Ron said. 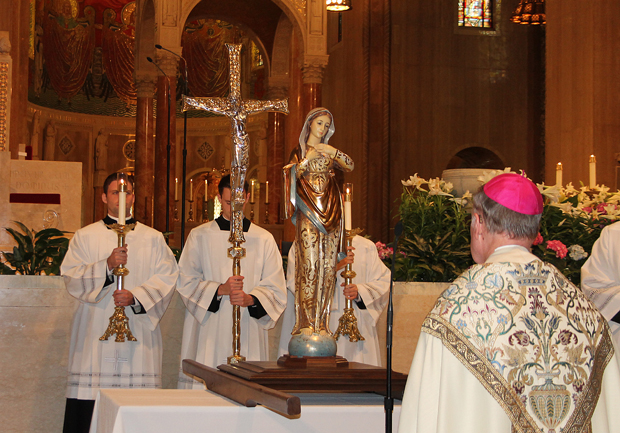 Bishop Michael Fitzgerald prays before the crowning of a statue of Mary April 23 at the Basilica of the National Shrine of the Immaculate Conception. (Lou Baldwin)

Ellen Barbarino, who came with her friend Barbara Ciullo on a bus from Stella Maris Parish in Philadelphia, estimated this pilgrimage was her 10th visit. “I still haven’t seen everything. I love it,” she said.

Most pilgrims came as day-trippers on chartered buses, including two busloads from St. Charles Borromeo Seminary. Again, some were already familiar with the shrine.

“I was here when we came to Washington for the March for Life,” said Greg Miller, who is in his first year at the seminary. “It is really a magnificent basilica.”

One group, from the Spiritual Year Program at St. Charles, was different. They were on a three-day visit to Washington.

“We have nine seminarians here,” said Father Christopher Cooke, who directs the program. “Yesterday we visited the Franciscan Monastery which has replicas of Jesus’ tomb and Golgotha. You can stand at Golgotha and really visualize it. We also visited the Pope John Paul II Shrine.”

In recent years it has been the tradition to hold Philadelphia’s pilgrimage to the basilica every other year in October. This visit really was due to be held in October 2015, but because of the proximity to the visit of Pope Francis it was delayed until now. 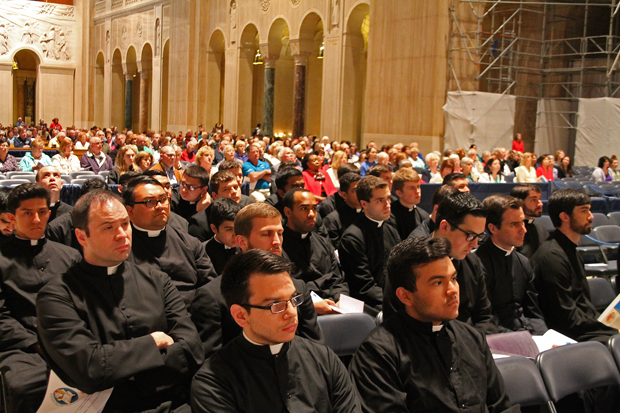 Seminarians from St. Charles Borromeo Seminary and other pilgrims pray at the Basilica of the National Shrine of the Immaculate Conception during the archdiocesan pilgrimage. (Lou Baldwin)

NEXT: Cabrini College set to become a university this summer