Galveston-Houston welcomes one of largest groups of new Catholics in U.S. 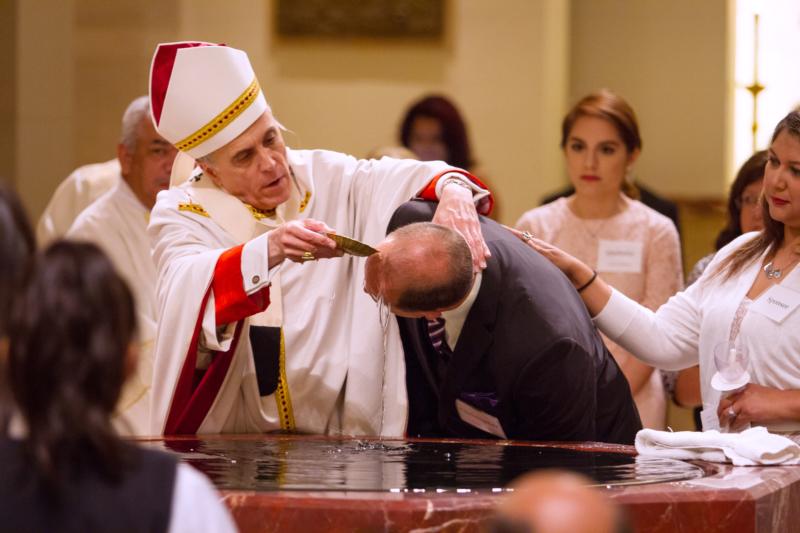 Cardinal Daniel N. DiNardo of Galveston-Houston baptizes a catechumen during the Easter Vigil at the Co-Cathedral of the Sacred Heart in Houston March 26. (CNS photo/James Ramos, Texas Catholic Herald)

HOUSTON (CNS) — Laurel Devins couldn’t help but smile when she saw Ella Claffy be confirmed by Cardinal Daniel N. DiNardo of Galveston-Houston during Easter Vigil Mass at the Co-Cathedral of the Sacred Heart in Houston March 26.

“I was definitely enjoying watching the interaction between (Ella and Cardinal DiNardo) knowing that I would be next,” Devins said. “She was very good at communicating with the cardinal, it was a nice moment to see.”

Nine-year-old Claffy, who was confirmed right before Devins, used one word to describe her Easter Vigil experience: “Wow.”

Then Claffy swayed excitedly when describing St. Illuminata, her confirmation saint: “Most of her records were burned, but she was the patron saint of Todi, Italy. In most of her icons, she’s holding a book and a quill pen, and I love to read and I love to write.”

Angel Lopez, 10, was a bit more sheepish when describing St. Gabriel the Archangel, his confirmation saint. He deferred to his mother, asking her to help him explain Gabriel’s importance. “He’s nervous,” she said, laughing.

He said he was excited about all of this, and that he appreciated all of his friends and family who stayed through the late-night Saturday Mass. His big grin said it all as he waved to them in the adjacent pews.

“Those to be baptized, those to be received by the Catholic Church, and those to be confirmed, your narrative goes into all of the narrative of all the members of the body of Christ,” said Cardinal DiNardo in his Easter Vigil homily. “It’s your narrative now too. It’s your story. Isn’t that wild?”

Devins, Claffy and Lopez were among the 2,240 candidates and catechumens welcomed into the Catholic Church in the Archdiocese of Galveston-Houston. That number is thought to be the highest for any U.S. diocese.

Catechumens are those who have never been baptized; candidates are those baptized in another Christian denomination who want to come into full communion with the Catholic Church.

The catechumens received baptism, confirmation and first Communion at the Holy Saturday services, while the candidates made a profession of faith, were confirmed — if they had not already been confirmed — and received the Eucharist.

About 80 of the nearly 200 dioceses in the United States reported numbers for 2016 to the U.S. Conference of Catholic Bishops. Two other archdioceses with large numbers of candidates and catechumens were Los Angeles, with 1,638 new Catholics, and New York, with 1,613.

In Houston, Devins told the Texas Catholic Herald, the archdiocesan newspaper, that she chose St. Anne as her confirmation saint because St. Anne “is the saint of all women.” Known as Jesus’ grandmother, Devins said St. Anne prays for women “in different times of their lives, whether they’re childless or able to bear children, at any difficult moment of a woman’s life.”

She finds solace in the current Jubilee Year of Mercy: Mercy is forgiveness, “and trying to reach out to those who are in pain because of wrongdoing and even accepting peace,” she said. She’ll soon marry a lifelong Catholic, and decided that becoming Catholic was the right move forward in their relationship.

“It’s been so welcoming,” Devins said of her experience becoming a Catholic. “I’m very glad to be a part of it.” She was a Methodist.

Claffy, still beaming unusually for a 9-year-old at near midnight, agreed. “I’m now a part of the Catholic Church,” she said. “And I’m really excited.”

NEXT: Oscar- and Emmy-winning actress Patty Duke dies at 69