Friends of Dorothy Day commend important step in her sainthood cause 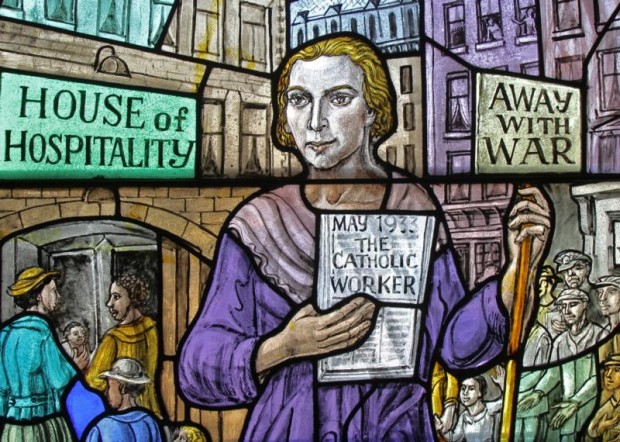 Dorothy Day, co-founder of the Catholic Worker Movement and its newspaper, The Catholic Worker, is depicted in a stained-glass window at Our Lady of Lourdes Church in the Staten Island borough of New York. (CNS photo/Gregory A. Shemitz)

WASHINGTON — The recent update in the sainthood cause for American Catholic icon Dorothy Day is welcome news to many of her friends and associates who believe her understanding of Catholic social teaching should be held up as a church value.

The Archdiocese of New York announced April 19 an important next step in the canonization process for Day: a canonical inquiry into the life of the co-founder of the Catholic Worker Movement and famed peace activist.

“For those who knew her, there is no question about Dorothy’s holiness and her prophetic witness,” said Patrick Jordan, a former managing editor of The Catholic Worker newspaper that Day helped launch in 1933 and one of her longtime companions.

“Canonization, on the other hand, is a legal process meant to certify a certain individual’s ‘status’ at the time of her or his death and what this means for the life of the church,” Jordan told Catholic News Service. “Obviously, there are lots more saints than those included on the church’s official list. Yet, for those memorable enough to be so designated, the legal process of canonization assures that their stories will be handed down to future generations to emulate and to value. All to the good.”

The canonical inquiry by the archdiocese — which is sponsoring Day’s sainthood cause and is where she oversaw some of the Catholic Worker houses of hospitality for poor and marginalized people — will find a historical commission issuing a report placing Day’s life in historical context and reviewing her unpublished writings.

New York Cardinal Timothy M. Dolan will appoint theological experts to review her published writings — two readers for each publication — with an eye toward doctrine and morals.

Jordan and his wife Kathleen — both of whom helped care for Day in her later years — told CNS they commend the archdiocese for committing considerable time and resources to gathering the testimonies needed to determine the social activist’s qualifications for canonization and to examining her considerable writings for their wisdom and theological acuity.

Day’s sainthood cause was first undertaken by one of Cardinal Dolan’s predecessors, Cardinal John J. O’Connor, in 2000. 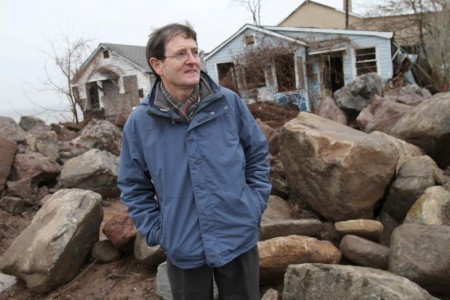 Patrick Jordan, former managing editor of the Catholic Worker newspaper, stands near abandoned cottages that were once part of the Spanish Camp enclave in the Staten Island borough of New York Dec. 9, 2012. Jordan and his wife Kathleen, who were close associates of Catholic social activist Dorothy Day, had lived in one of the cottages. Day was a part-time resident of the community and later in her life spent much of her time there. (CNS photo/Gregory A. Shemitz)

The U.S. bishops unanimously endorsed Day’s sainthood cause during their 2012 fall general assembly.

Day was born in Brooklyn in 1897 and shortly thereafter her family moved to San Francisco, where she was baptized an Episcopalian. Her family later moved to Chicago, and Day attended the University of Illinois.

However, she left college to work as a journalist in New York City. While in Manhattan, she got involved in the causes of her day, such as women’s suffrage and peace, and was part of a circle of literary and artistic figures of the era.

In Day’s personal life, though, she went through a string of love affairs, a failed marriage, a suicide attempt and an abortion. But with the birth of her daughter, Tamar, in 1926, Day embraced Catholicism. She had Tamar baptized Catholic, which ended her common-law marriage and brought dismay to her friends.

Seeking to fuse her life and her faith, Day wrote for such Catholic publications as America and Commonweal. In 1932, she met Peter Maurin, a French immigrant and former member of the Christian Brothers. Together they started the Catholic Worker newspaper in the midst of the Great Depression and opened a house of hospitality, from which eventually spun dozens of similar houses and farm communities in the U.S. and elsewhere.

The archdiocese also will interview eyewitnesses to Day’s life, gathering evidence that will be sent to the Vatican’s Congregation for Saints’ Causes and to Pope Francis.

If, after examining the information, the Vatican congregation and the pope recognize Day’s heroic virtues, she will be declared “venerable,” the next step in the canonization process. She now has the title “servant of God.”

Beatification and, ultimately, canonization are the next steps in the process. In general, one miracle determined to have occurred through the intercession of a candidate for sainthood is required for beatification and a second such miracle is needed for canonization.

“By declaring a person a saint, the church does not mean to honor that person. It is not a reward,” said Deacon Tom Cornell, co-founder of the Catholic Peace Fellowship and a decades-long associate of Day. “It is meant to hold up an example of authentic Christian discipleship for a certain time and place.”

Cornell told CNS he hopes this latest step in the canonization process means the Catholic Church establishment will adopt Day’s staunch anti-war positions and “will speed the day when all the world will know that Catholics favor conscientious objection to war and the development of nonviolent alternatives to conflict resolution and resistance to the imposition of tyranny from within or without a nation state.”

Day certainly suspected that a canonization cause on her behalf could be launched after her death. Though she scoffed at the notion during her lifetime, people who knew her intimately say she had conflicting thoughts on the process that goes into the church naming someone a saint.

“Our lives are full of contradiction,” said Martha Hennessy, one of Day’s nine grandchildren, in a 2012 interview with CNS at Maryhouse, a Catholic Worker residence in the East Village section of New York. It’s also the house where Day worked and where she died in 1980.

“You know, she stated, ‘Don’t call me a saint, I don’t want to be dismissed that easily,'” Hennessy, now 61, said. “She also said we’re all called to be saints. But, I also see the hand of God pushing her in a direction that she didn’t necessarily choose or understand at the time.

“I mean, there are other things she would rather have done,” Hennessy said. “But, in the end it was very clear that her life took the direction that it took, because she responded to hearing the voice of God.”

The Jordans also said they see Day’s contributions to the faith getting much-deserved attention in recent times, such as Pope Francis’ mention of her in his Sept. 24, 2015, address to a joint meeting of Congress and the recent discussion of her life in such best-selling books as David Brooks’ “The Road to Character.”

“The serious issues of the times themselves — refugees, poverty and inequality, racism, massive spending on wars and developing military technologies for future wars, capital punishment, torture, and prolonged incarcerations, etc. — are all issues on which Dorothy Day wrote forcefully and sought to ameliorate,” Patrick Jordan said.

“That her canonization process has now reached this significant stage indicates Dorothy’s life will increasingly be given the recognition it deserves,” he said. “First in the United States, then in Rome, and finally throughout the world.”

NEXT: Georgia teacher marries beau with her second-graders in the front row