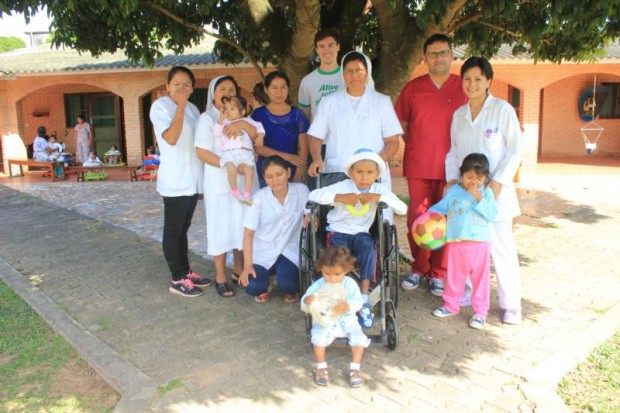 Lay Catholic missionary Connor Bergeron of Reston, Va., center back row, poses in this 2015 photo with people he served during his 16 months of working with the Salesian Lay Missioners in Yapacani, Bolivia. (CNS photo/courtesy of Connor Bergeron)

WASHINGTON (CNS) — Before Connor Bergeron of Reston, Virginia, left to serve as a lay missionary in Bolivia, he wasn’t sure how the experience would impact his life, other than soaking in the excitement and intrigue of living abroad.

After graduating from college, Bergeron was looking for an experience that would help him tie together what he had learned in school with some practical understanding with the world beyond his American upbringing.

At first, he considered teaching English in a foreign country.

However, after consulting with a parish priest, he looked into doing a year of missionary work, went on the Catholic Volunteer Network website and found a program with the Salesian Lay Missioners that appealed to him and set off for Yapacani, Bolivia, in the summer of 2014.

Bergeron knew he would be using his experience crafting video stories in his work at the Salesian-owned radio and television station, that he would be teaching Bolivian children and serving as an English translator in the Spanish-speaking country.

“My family and friends didn’t know what I was signing up for and to be honest, I didn’t know exactly either,” he said. “Which was fine. Because this is something I was being called to.”

The work was hard and the transition to living in rather primitive conditions was challenging, he said, yet Bergeron immediately found the mission rewarding.

When he returned to the U.S. 16 months later, he felt like he had grown emotionally and spiritually.

This is not an uncommon outcome for young Catholic lay missionaries, said Jim Lindsay, executive director of the Catholic Volunteer Network.

“These missions are incredibly important to the church because it is an opportunity for young people to put their faith into action,” said Amy Rowland, program coordinator for community service through the Office of Campus Ministry at The Catholic University of America in Washington.

“It is an opportunity to grow closer to God, to broaden their horizons, and to evaluate what is important to them in life before embarking on their careers,” Rowland told Catholic News Service.

Based in Silver Spring, Maryland, the Catholic Volunteer Network — www.catholicvolunteernetwork.org — is one of the United States’ largest Catholic coordinators of mission trips and the organization had 2,668 lay missionaries serving within the U.S. for nine months or longer during 2014-2015 and 428 serving for the same amount of time internationally, Lindsay told CNS.

The Catholic University of American, just one of hundreds of Catholic colleges in the U.S., has anywhere from 15 to 30 students annually commit to doing a long-term volunteer mission after graduation, Rowland said.

“Almost all of our lay missionaries are working with the materially poor in both inner cities and rural areas,” Lindsay said.

The most popular field of service for long-term missionaries enrolled in Catholic Volunteer Network programs is social services, accounting for about 25 percent, he said.

Approximately 20 percent serve in education fields and about 10 percent are directly involved in pastoral ministry and religious education, Lindsay said.

Other fields include health care and advocacy, Rowland said.

“Our missionaries almost always live under very simple conditions,” Lindsay said. “Most often, they live in community with other missionaries, where they pray together and seek to discover the connection between their faith and the service they render to the poor and marginalized.”

The value of a yearlong mission in any location is impossible to measure because the result is one of personal growth, Rowland said.

“After spending a year in a different city or country, students are able to understand more fully the issues that affect certain populations simply by living and walking with the people affected along their journeys,” she said. “For the church, opportunities like missions allow students to find and share their faith with people from all kinds of backgrounds and beliefs, which hopefully leads them into a life filled with similar, faith-filled experiences.”

NEXT: Head of Knights urges action by U.S. after Kerry’s genocide declaration