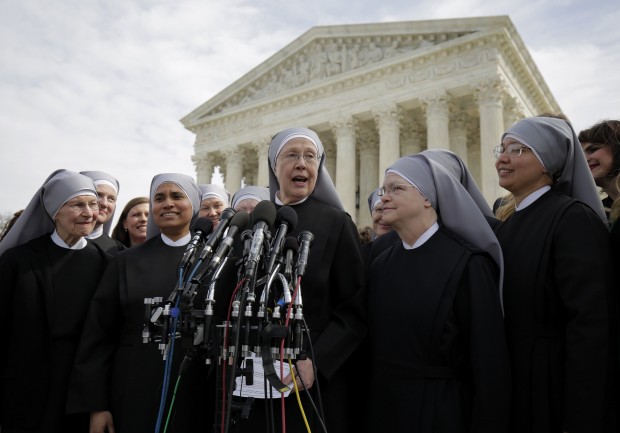 NEW HAVEN, Conn. (CNS) — According to a Marist Poll survey, a majority of Americans say it is “unfair” how the federal government is treating the Little Sisters of the Poor in the ongoing dispute over compliance with the U.S. Department of Health and Human Services contraceptive mandate.

Fifty-three percent of those polled called it unfair, while 32 percent said it was not.

The poll was conducted by telephone, in English, April 8-12. According to the New Haven-based Knights of Columbus, which commissioned the question and is a sponsor of the Marist Poll, 1,020 Americans were asked. The margin of error is 3.1 percentage points.

The poll was part of an “omnibus” survey in which Marist allows different clients to “purchase” questions to be asked, according to Barbara Carvalho, Marist Poll director.

In the dispute, the federal government has sought compliance from most employers, including religious employers, with the contraceptive mandate, requiring them to provide contraceptives – including those that could induce an abortion — as part of employees’ health insurance plans — even if the employer morally opposes the coverage.

The law has a very narrowly drawn exemption for churches. For non-exempt religious employers the government created what it calls ” a work around,” by which the objecting religious employers can certify with HHS or the Department of Labor that providing the coverage will violate their religious principles. In turn the federal government then arranges with a third party to provide the coverage. But religious employers, the Little Sisters of the Poor among them, say that even following this so-called accommodation would violate their religious principles. An earlier version of the “work-around” asked objecting employers to sign a form, file it with HHS and ask a third party, such as the manage of their health plan, to provide the coverage.

The Marist Poll question had a long preamble: “The Affordable Care Act requires many employers through their health plan to cover contraceptives including drugs that cause abortion. Some religious employers are fully exempt and don’t have to participate if it violates their religious beliefs. But, other ministries with similar beliefs, including the Little Sisters of the Poor, are not exempt unless they sign a form directing their contractors to deliver such coverage through the ministries’ own health plan.”

Almost every subgroup tabulated had a majority calling the process unfair: 53 percent of men, 52 percent of women, 53 percent of registered voters, 63 percent of Republicans and 56 percent of independents. Even among Democrats a plurality of 44 percent said it was unfair, while 43 percent called it fair.

While the court of public opinion may be with the Little Sisters of the Poor, the court that matters most — the Supreme Court — has signaled a 4-4 deadlock on the issue, but on March 29 the court asked both the government and the sisters to submit new filings in the issue. Some filings were submitted April 12, while further filings were expected April 20.

The justices’ request came about a week after the Supreme Court heard oral arguments in the challenge of the mandate by the Littler Sisters and several other Catholic and other faith-based entities. The court asked both sides in the suit to consider a proposal that such coverage be provided through an alternative health care plan without involving the religious employers in a legal brief filed with the court.

NEXT: Aim of Solidarity Festival to show Catholic social teaching in action