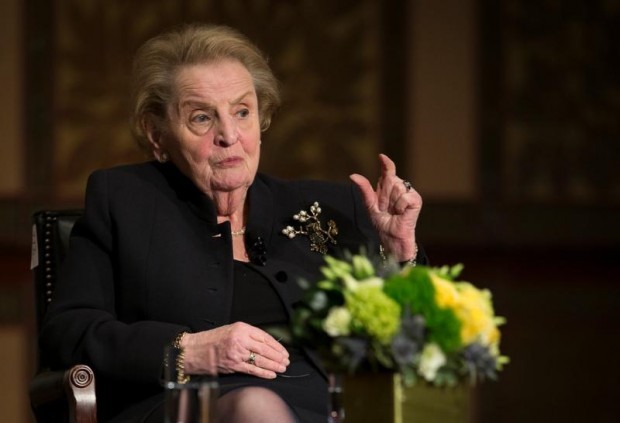 WASHINGTON (CNS) — Madeleine Albright, former U.S. secretary of state, said she grew up in a generation that was taught to “keep God and religion as separate as possible from foreign policy.”

But that’s certainly not her view.

In fact, she’s adamant that religion must be at the table in foreign policy discussions.

In an April 7 lecture at Georgetown University, she told students and faculty members who filled a campus hall that the greatest modern challenge is to “build bridges of understanding and tolerance.”

“There are some who might want to engage in such a bridge-building effort without bringing religion into the conversation — to them I say, ‘Good luck,'” she added.

Albright’s lecture kicked off the 10th anniversary celebration of Georgetown’s Berkley Center for Religion, Peace & World Affairs. The former diplomat is currently the Michael and Virginia Mortara Endowed Distinguished Professor in the Practice of Diplomacy at Georgetown University’s School of Foreign Service. She joked that you could write an entire book on the subject of religion and international relations, which she did, 10 years ago. It was titled “The Mighty and the Almighty: Reflections on America, God and World Affairs.”

“That had nothing controversial in it,” she told the crowd, laughing.

Albright, who was born in 1937 in Prague, said the book was not something she ever thought she would write but it came from seeing religion not getting the place it deserved in policy discussions.

The concept, she noted, is particularly hard for Americans to accept “because we believe so deeply in the separation of church and state.” She said efforts to have religion be part of policy talks must be taken up but it has to be done carefully to avoid creating new problems.

In other words, it’s a tricky balance. She said a friend of hers compares it to brain surgery: “necessary to do, but disastrous if you slip up.”

People tend to have a narrow view of religion, she said, not forgetting it as much as compartmentalizing it, keeping it personal and local.

She understands how religion can “serve as source of inspiration and healing” and she also knows the flip side: how it is “easy to blame religion, or what people do in the name of religion,” for the troubles in today’s world.

“But that’s too simple,” she added.

She said religion is a powerful force and its “impact depends entirely on what it empowers people to do.” The challenge is to “harness the unifying potential of faith while containing its capacity to divide.”

The former secretary of state, awarded the Presidential Medal of Freedom in 2012, said terrorists want to divide the modern world.

“We need to remember we were not attacked on September 11 by the Muslim world; we were attacked by followers of a perverse ideology that uses Islam to justify terrorism,” she said.

She also noted that the worst nightmare today is that sectarian or religious conflicts could become “unable to contain.” These types of conflicts extend back to ancient times, she noted, but the new element is the extent of damage this violence can inflict, “spread across the Internet for the world to see.”

Albright ended her address with a plea for groups such as Georgetown’s Berkley Center to do more, noting that government agencies can only do so much. She urged them to continue to help people deepen their understanding of religion and religious literacy, and continue to “encourage dialogue to advance the cause of peace.”

PREVIOUS: Cupich: Pope has ‘intuition about where people live their actual lives’

NEXT: Detroit’s archbishop, imam decry terrorism, pledge to work together