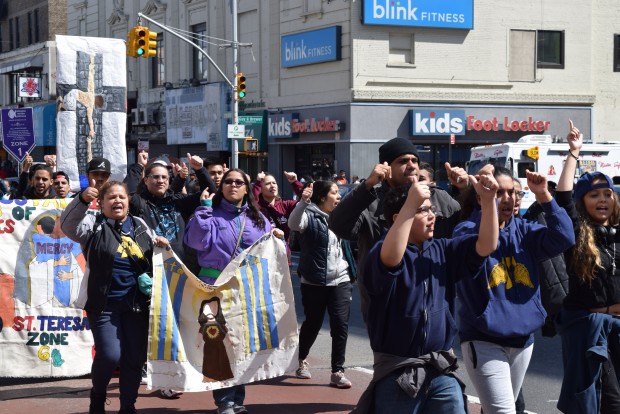 Hundreds of members of the the Jornada Movement in the Diocese of Brooklyn, N.Y., march through the street in the borough of Queens March 26. The young people spent hours that day walking, praying the rosary and bearing witness to their Catholic faith. (CNS photo/Maria-Pia Negro Chin, The Tablet)

JAMAICA, N.Y. (CNS) — With joyous song, dance and prayer, nearly 500 members of the Jornada movement came together as one March 26 to share the mercy of God during their annual “Caminata,” or walk.

The young people spent hours walking, praying the rosary and bearing witness to their faith in the streets of the New York borough of Queens.

This year’s slogan was “Let us fall into the hand of God, for his mercy is great,” from Chapter 24, Verse 14, of the Second Book of Samuel. The young people exuded the theme of mercy and love as God’s gifts as they walked five miles while visiting churches in the area the morning of Holy Saturday.

“Caminata is our way of showing people that Catholicism is alive in the youth of today,” said Efrain “Frito” Torres, a delegate of mission and a member of the movement’s leadership. “What better way to evangelize than young people praising God.”

Based in the Brooklyn Diocese, the Movimiento de Jornadas de Vida Cristiana (Journeys of Christian-Life Movement) is a spiritual movement for Hispanic youth founded around 50 years ago through the inspiration of Vincentian priests from Spain and now under the care of the diocesan bishop of Brooklyn.

The mission of the Jornada movement is for youth to deepen their faith through a personal encounter with Christ and to evangelize other youth. The New York chapter is modeled after adult Cursillo retreats. The traditional Holy Saturday Caminata began more than 25 years ago when leaders of the movement saw the need to evangelize in the wider community.

Melanie Feliciano, the movement’s vice president, recalled her awe at her first Caminata when she was 13. She was impressed at how hundreds of Jornadistas came together in an act of faith and sacrifice on Holy Saturday to bring the message of Christ to the streets.

Before they started the Caminata at Immaculate Conception Church in Jamaica, Brooklyn Bishop Nicholas DiMarzio encouraged the youth to reflect on God’s mercy in their pilgrimage to one of the diocese’s doors of mercy — so designated for the Catholic Church’s Jubilee Year of Mercy — at the Shrine Church of St. Gerard Majella in Hollis, one of the stops on the Caminata’s route. 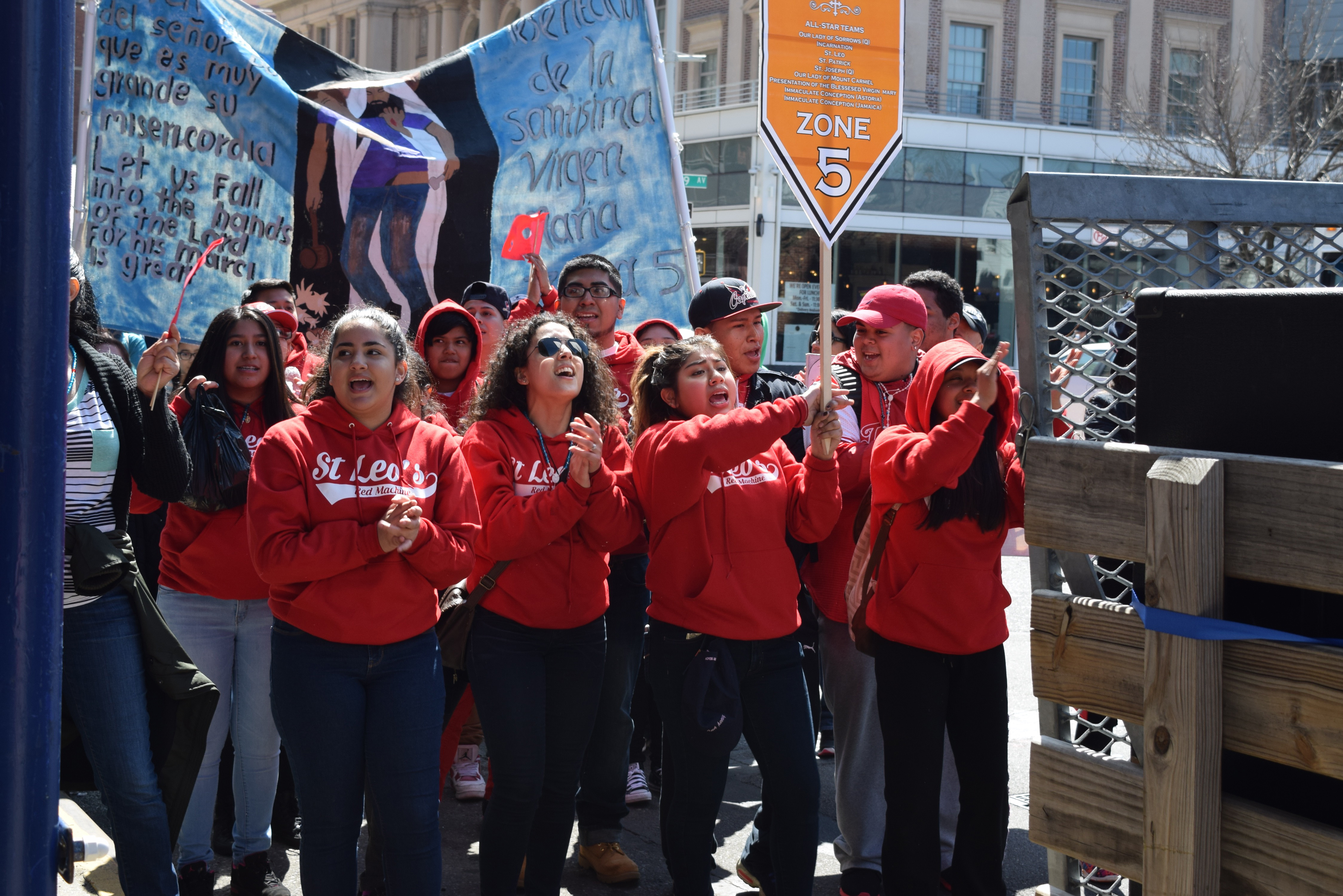 Hundreds of members of the Jornada Movement in the Diocese of Brooklyn, N.Y., march through the street in the borough of Queens March 26. (CNS photo/Maria-Pia Negro Chin, The Tablet)

Children and adults, including members of the Cursillo movement joined the walk, including Msgr. Perfecto Vazquez, who will celebrate his 60th anniversary as a priest this year.

New Jornadista Tatiana Elzate, parishioner from Blessed Sacrament in Cypress Hills, was excited to participate in her first Caminata. That afternoon, she said that the long walk was worth being tired because it helped her reflect on the mystery of the Resurrection, so she does not take it for granted.

Alexandro Morales, of Holy Spirit Church in Borough Park, said that every year the Caminata wakes up his spirit in time to live the joy of Easter.

This year’s Caminata had impact because there were more people on the streets, leaders said. Members of the movement passed around fliers and reminded people that God loves them.

Rubia Rodriguez and Hiliana Arroyo, from Our Lady of Sorrows in Corona, said the Caminata is always an amazing experience to be with other teenagers who believe in God and to share His love and mercy with others.

“You feel God all around us, through everyone,” Rodriguez told The Tablet, Brooklyn’s diocesan newspaper. “(People on the street) smile. We tell them ‘God bless you’ and there (are) a lot of people who have not heard that in a while. That is why we are here.”

“As we walk around the streets, we tell the people of God that God is not death, that Christ is alive and that his church is vibrant,” said Father James Kuroly, the movement’s spiritual director.

Negro Chin is a reporter at The Tablet, newspaper of the Diocese of Brooklyn.

PREVIOUS: New rules ensure faith-based groups can vie for funding like other groups