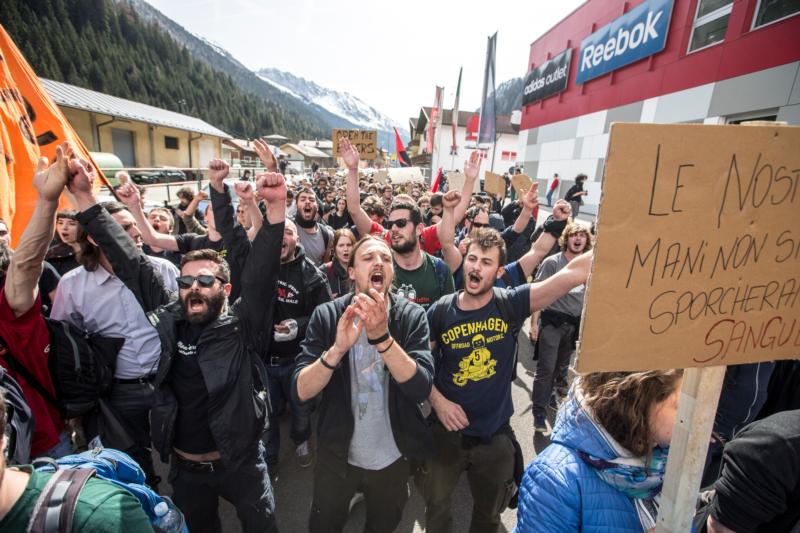 People demonstrate April 3 against the Austrian government's planned reintroduction of border controls at the Brenner Pass in Austria. Austrian church leaders have criticized their government for rebuilding border controls in a bid to keep out refugees arriving from Greece and Italy. (CNS photo/Jan Hetfleisch, EPA)

WARSAW, Poland (CNS) — Austrian church leaders criticized their government for rebuilding border controls in a bid to keep out refugees.

Construction began April 13 on road barriers and a registration hall at the Brenner Pass, the main route to Austria from Italy. It is expected to be completed by late May.

“We certainly face a significant challenge, but the answer cannot lie in saying goodbye to human rights,” said Bishop Benno Elbs of Feldkirch, who heads the Austrian church’s Caritas agency. “Concerns and fears among parts of our population must be taken seriously and met with objective information. But people should fear the polarization of society, not the refugees.”

The bishop said April 14 that it was essential that Austrians not stop “extending helping hands,” adding that Pope Francis’ planned weekend visit to a refugee camp on the Greek island of Lesbos would “clearly signal solidarity with people seeking protection.”

A spokesman for Austria’s Ecumenical Council, which includes the Catholic Church, said the frontier barriers risked becoming “a new symbol of division” in Europe.

Natasha Bertaud, spokeswoman for the EU’s governing commission, said officials were “very concerned” about the new controls, adding that the Brenner Pass was “essential to freedom of movement” in Europe.

Church leaders on the Italian side of the pass also criticized the barriers.

Archbishop Francesco Moraglia of Venice, Italy, told Italy’s La Repubblica daily April 8 that he regretted “the elites are manifestly unable to act together” in protecting refugees.

Bishop Ivo Muser of Bolzano-Bressanone, whose Italian diocese borders Austria, warned the refugee influx would last “not a few months, but years” and said a new assertion of national interests risked “building fences in heads and hearts.”

“It’s understandable there are fears, uncertainties and difficulties with this issue, but they shouldn’t be used as a political tool,” Bishop Muser said April 13.

“When individual countries pull back, leaving the common responsibility to just a few, these few cannot cope,” he added. “Either we tackle this challenge as a community or we are doomed to fail.”

PREVIOUS: Pakistan Catholic officials back plea not to demonize all Muslims

NEXT: Trip to Greece is humanitarian, not political, Vatican spokesman says