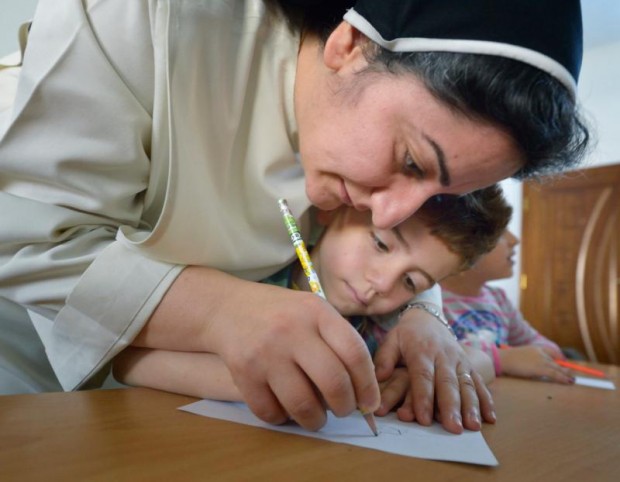 IRBIL, Iraq (CNS) — When the Islamic State group rolled across Iraq’s Ninevah Plain in 2014, tens of thousands of Christians fled for their lives to Kurdish-controlled areas of the country. They still wait in limbo in crowded camps, facing an undefined future. The only certainty they enjoy is knowing that whatever happens to them, a group of Dominican nuns will be at their side.

“We will not leave our people. Wherever they go, we will go with them,” said Sister Luma Khudher, a member of the Dominican Sisters of St. Catherine of Siena.

The Iraqi congregation was founded in Mosul in the late 19th century and, over the decades, the nuns have operated schools and clinics throughout the country. In the aftermath of the 2003 U.S. invasion, many of their facilities became refuges for families displaced by the violence.

By 2014, driven out of Mosul by the Islamic State, many of the nuns were in Qaraqosh, where they were repeatedly assured that Kurdish Peshmerga fighters would protect the city. But the Kurdish troops pulled out late Aug. 6, 2014, and the sisters were among the last to hurriedly flee for their lives.

Sister Khudher drove one of the convent’s four vehicles, the sisters packed tight as they crept along the dark and crowded highway to Irbil, the capital of Iraq’s semi-autonomous Kurdistan region. It took 10 hours to cover 30 miles.

“Our superior was with me in the car, and she wouldn’t let the sisters cry so that I could focus on driving,” Khudher said. “When we finally got here I couldn’t stop crying. All of a sudden I had to face the reality that I was not in my hometown anymore. I had left my church, my convent, I had left everything behind. And the people, like Jesus says in the Gospel, were like sheep without a shepherd.” 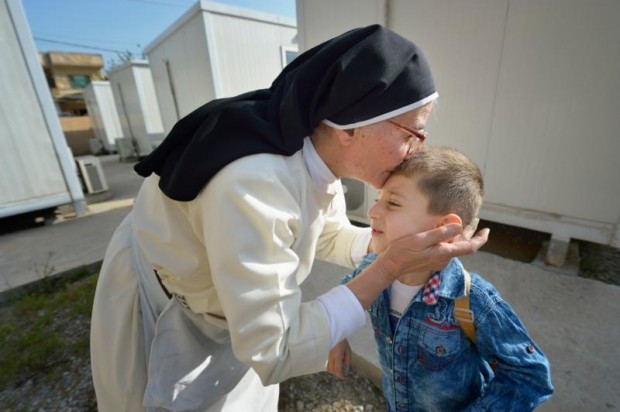 As tens of thousands of displaced Iraqis poured into Irbil and other areas, the Kurdish regional government, facing the collapse of its own oil-fueled economy, had few resources to offer. The country’s central government was far away in Baghdad and not overly concerned about a bunch of displaced Christians and other minorities.

It was the church that stepped into the breach, appealing for resources from around the world, organizing displaced families in tents, solving the myriad problems of a population that had lived a middle-class life back home, yet which had to flee with no advance notice, and thus no chance to bring along much more than the clothes they wore.

“We were in shock. We didn’t know if it was day or night. We just looked at each other and looked at the people and tried to listen to them. We tried to be strong for the others, but we were all the same,” Sister Khudher said. “Sister Maria (Hanna, the congregation’s superior) said we would start with diapers and milk. So we went to different camps, and it was my first time to learn that diapers have numbers. I was handing them out and someone would say, ‘Sister, this is not the size I need.’ I didn’t know diapers came in sizes.”

Diapers and milk soon became blankets and tarps and food. The nuns became the de facto managers of aid for much of the displaced community.

“The sisters were everywhere. When we asked about the needs of the displaced no one could answer with any authority except the Dominican sisters,” Michel Constantin, the regional director for the Catholic Near East Welfare Association, told Catholic News Service.

“There was a vacuum in the local church, which wasn’t ready to deal with such a situation. And the displaced priests weren’t trained to deal with this crisis. The sisters were more educated, they’d already been involved in social work with their clinics and schools and orphanages, and they were in direct contact with the people on the ground,” said Constantin, who quickly helped the congregation set up a clinic.

The Dominican sisters were not the only religious order around, but Constantin said they were unique.

“We talked with other congregations, but some said they didn’t know how to deal with refugees. Or they spoke different languages. Some said this wasn’t their mandate. But the Dominican sisters never talked about mandates. They said there’s a need and we’ll work day and night to meet it,” he said. 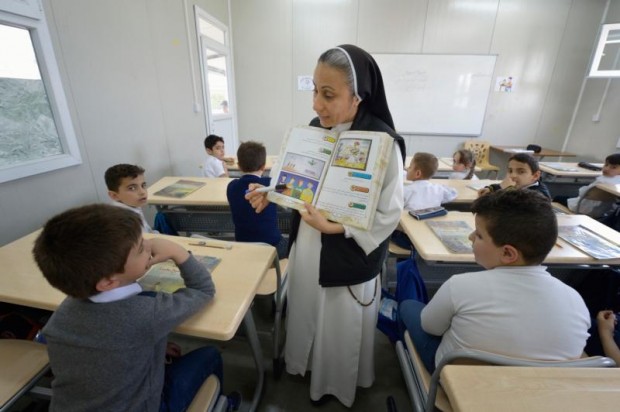 The sisters were also selfless, not mentioning their own miserable living conditions. Several elderly nuns died in the first few difficult months in Irbil. “When we had asked the sisters about what was needed, they never mentioned themselves. They only talked about the needs of the people,” Constantin said.

Constantin says a group of Lebanese nuns collected their own funds to help the Dominican sisters with underwear, soap and shampoo for personal use.

The sisters expanded their medical work, adding mobile clinics to reach the displaced living in remote villages. And with local schools teaching in Kurdish, they began opening schools and preschools in Arabic and Aramaic for the displaced.

Sister Khudher said central to their work was listening, both to others as well as to the Spirit.

“Because we were a community and we could talk to each other, we dealt with the trauma better. But for ordinary people it was harder,” she said. “So we divided ourselves, two sisters going to each camp. We would sometimes just sit and listen to the people. They would talk about what they were facing every day. Most of their problems were with housing, or school problems with their children, and we would just listen to them.”

The sisters found strength in spiritual discipline. “We never stopped our regular practice of prayer. From the first day we arrived here, we had Mass and morning prayer, the rosary at noon, and then evening prayer,” she said.

When the time comes to return to Qaraqosh and Mosul, that spiritual grounding will be essential as the sisters and other displaced deal with their feelings toward their Muslim neighbors, some of whom cooperated with the Islamic State takeover.

“We healed them. We educated them. So how could they do this now? There was a lot of anger. And we’re still sometimes angry about what happened. We are not saints. We are humans,” Sister Khudher said.

“When we go back and they come to our hospital, I don’t think we will say we won’t heal them. We will just do what Jesus says, forgive your enemies, love your enemies. It’s hard at this point to think about it, but I think people will do it. We can’t just pray and then not do what Jesus tells us to do.”

Sister Khudher is not as forgiving toward the government of the United States, where she has studied and has relatives.

“The invasion was a big, big mistake. A big mistake. The Iraqi government was going to fall sooner or later. The invasion brought Iraq a lot of violence, a lot of poverty, a lot of difficulties. The people of Iraq did not deserve that. The problem was with the government, and it should have been dealt with in a different way,” she said.

“People are the victims of all this now. That war was wrong, wrong, wrong. We are paying the price now for the invasion in 2003. We would not have experienced all of this if the United States had not invaded Iraq,” she said.

NEXT: Brazilians dismayed as deputies cite God during impeachment vote