Holy Spirit works through listening to one another, pope says 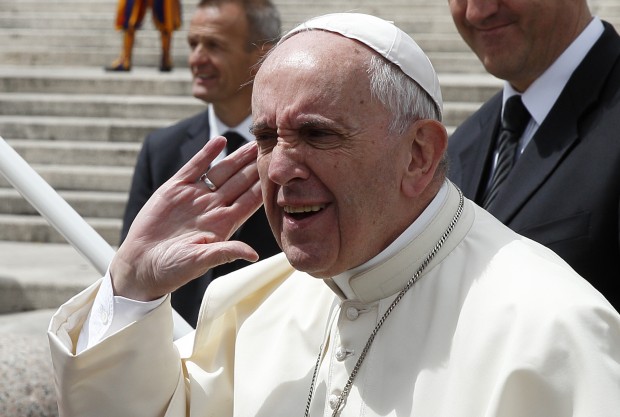 Pope Francis gestures toward pilgrims as he leaves his general audience in St. Peter's Square at the Vatican April 27. (CNS photo/Paul Haring)

VATICAN CITY (CNS) — A person who is afraid of listening to others when confronting a new situation does “not have the Spirit in their heart,” Pope Francis said.

Only through listening to others with humility can the Holy Spirit work and “the communion of the church” be expressed, he said April 28 during the Mass in the chapel of the Domus Sanctae Marthae.

“Even today there is resistance that continues in one form or another and the Spirit goes forward,” he said. “This the path of the church: to meet, to meet together, to listen to one another, to argue, to pray and decide.”

The day’s reading from the Acts of the Apostles (15:7-21) recalled the meeting of the Council of Jerusalem in which a debate arose on whether the salvation of the Gentiles hinged on their observation of the Mosaic law of circumcision.

After a long discussion, Peter tells the apostles that in granting the Holy Spirit to the Gentiles, God “made no distinction between us and them, for by faith he purified their hearts.”

The pope said that although the apostles “had a hot potato in their hands and did not know what to do,” the Holy Spirit strengthened and guided the church forward when facing “certain innovations, certain things that were never done before.”

However, he noted that prior to coming to an agreement, “something beautiful” occurs: The assembly fell silent and listened to Paul and Barnabas as they described the signs and wonders God had done among the Gentiles.

It is important “to listen, to not be afraid to listen. When one is afraid of listening, they do not have the Spirit in their heart,” the pope said.

“And after having listened,” Pope Francis said, “they decided to send the Greek community — meaning the Christians who came from paganism — some disciples to calm them and tell them: ‘You are good, keep going.'”

The Second Vatican Council, he noted, was an example of the church following the same path as the apostles, who continued forward with the Holy Spirit despite resistance from within.

Pope Francis said that in crucial moments of disagreement and discernment, it is the Holy Spirit that “gives us courage, gives us patience, makes us sure we are going on the path of Jesus, helps us conquer resistance and be strong in martyrdom.”