‘It makes you weep,’ pope says of refugees’ stories 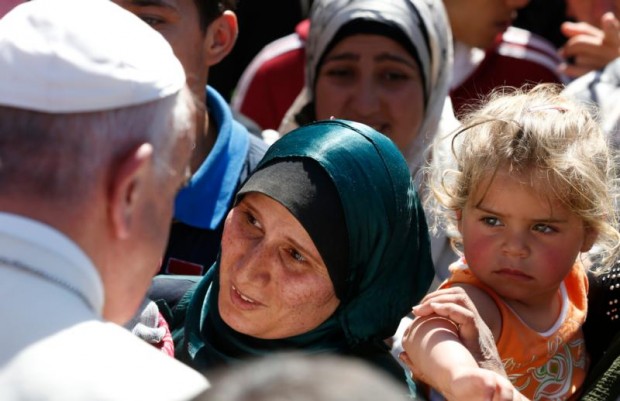 ABOARD THE PAPAL FLIGHT FROM GREECE (CNS) — When an aide suggested Pope Francis offer to fly some Syrian refugees back to Rome with him, the pope said he agreed immediately because it was “an inspiration of the Holy Spirit.”

In the end, he said, 12 Syrians — members of three families, including six children — had all the necessary papers from the Greek and Italian governments in time to fly with the pope April 16.

The fact that the 12 are all Muslims did not enter into the equation, the pope said. “I gave priority to children of God.”

Two Christian families originally had been on the Vatican’s list, too, he said, but their papers were not ready in time.

Spending about half an hour answering reporters’ questions, Pope Francis insisted his visit to Greece with Orthodox leaders was not about criticizing a recent agreement between the European Union and Turkey to return to Turkey those entering EU territory without legal permission.

“What I saw today and what you saw in that refugee camp — it makes you weep,” the pope told reporters.

“Look what I brought to show you,” the pope told them. He held up some of the drawings the children in the camp had given him. “Look at this,” he said, “this one saw a child drown.” 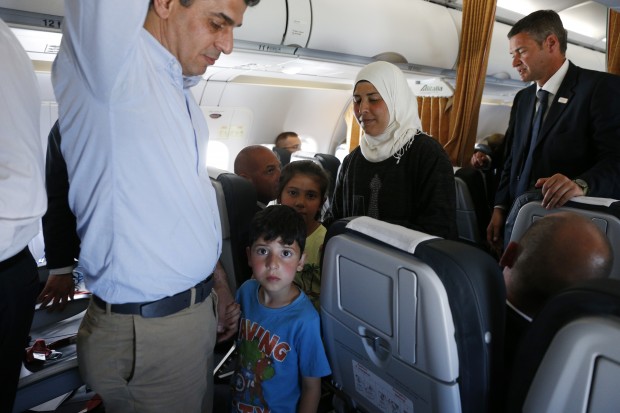 Syrian refugees walk though the aisle of Pope Francis’ flight from the Greek island of Lesbos to Rome April 16, 2016. The pope concluded his one-day visit to Greece by bringing 12 Syrian refugees to Italy aboard his flight. (CNS photo/Paul Haring)

“Really, today is a day to weep,” he said. Holding up another picture, he pointed to the top and said, “The sun is crying. If the sun is able to cry, we should be able to shed at least one tear” for those children who will carry the memory of suffering with them.

Asked specifically about immigration to the United States and how it relates to what he had called a “catastrophe,” Pope Francis insisted “it’s a global problem” and that Central Americans fleeing poverty and violence also deserve the world’s concern and assistance.

On other questions during the inflight news conference:

— Pope Francis confirmed he had met U.S. Senator Bernie Sanders that morning as the pope was leaving his residence. Sanders and other participants at a Vatican conference were staying in the Domus Sanctae Marthae, where the pope lives.

“It was polite” for Sanders, who knew when the pope was leaving, to go downstairs to greet him, the pope said. “If someone thinks greeting someone is to get involved in politics, I recommend he see a psychiatrist.”

— The pope was asked to settle debate about his postsynodal apostolic exhortation on the family and whether the document opened new possibilities for divorced and civilly remarried Catholics to receive Communion under some circumstances.

“I could say, ‘Yes. Period,’ but that would be too short a response,” the pope said. “I recommend everyone read the presentation made by Cardinal (Christoph) Schonborn” at the Vatican news conference presenting the document. The cardinal, archbishop of Vienna, had said the document represented “true innovations, but no break” with church tradition.

Still, the pope said, much of the news media focused so much on the question of Communion for the divorced that they skewed the public’s perception of the 2014 and 2015 meetings of the Synod of Bishops.

“Since I’m not a saint, this annoyed me and then saddened me,” the pope said. “Don’t they understand that the family throughout the world is in crisis?”

“The family is the foundation of society,” Pope Francis said. The great problems include a reluctance by young people to marry, extremely low birth rates in Europe, unemployment, poverty — “those are the big problems.” 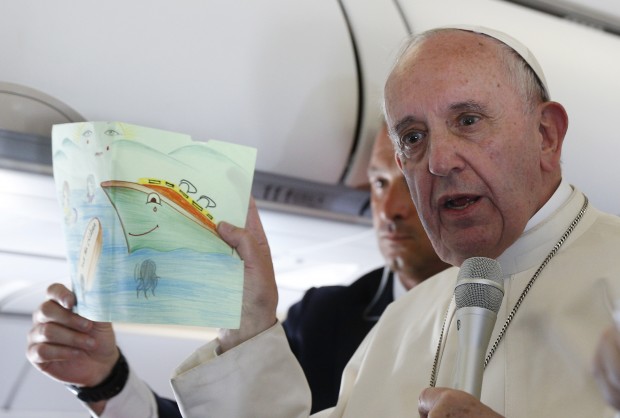 Pope Francis shows a drawing given by a child as he answers questions from journalists aboard his flight from the Greek island of Lesbos to Rome April 16, 2016. The drawing was given by a child at the Moria refugee camp in Lesbos where the pope met 250 people. The pope concluded his visit by bringing 12 refugees from Greece to Italy with him. (CNS photo/Paul Haring)

NEXT: Pope ends Greece trip by bringing 12 Syrians back to Rome