Pope: Living out one’s faith is useless without a repentant heart 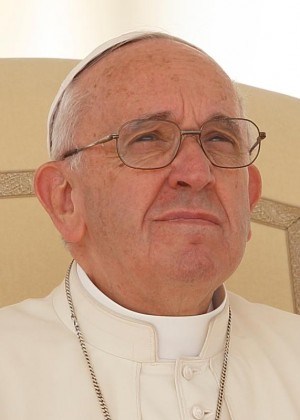 Pope Francis looks on during his general audience in St. Peter’s Square at the Vatican April 13. (CNS photo/Paul Haring)

VATICAN CITY (CNS) — Without a repentant heart, Christians can risk living out their faith superficially and fail to live out God’s desire for “mercy, not sacrifice,” Pope Francis said.

Instead, Jesus’ love for sinners shows that the church is not “a community of perfect people, but disciples on a path who follow the Lord because they recognize themselves as sinners and in need of his forgiveness,” the pope said at his weekly general audience in St. Peter’s Square April 13.

Jesus’ mission is “to search for each one of us, to heal our wounds and call us to follow him with love,” he said.

The pope reflected on the Gospel passage, which recounted Jesus calling Matthew to follow him despite the fact he was a tax collector and considered a sinner by the people.

Jesus, he said, did not rebuke him for his past but dines with him and “opens up a new future.”

“There is no saint without a past and there is not sinner without a future. This is beautiful; this is what Jesus does,” he said.

However, like the scribes and Pharisees, there is also the temptation for Christians to fall into pride and arrogance and believe themselves better than others. For Christ, no sinner is excluded because “God’s healing power knows no sickness that cannot be cured,” the pope said.

Jesus, he added, was not afraid of talking to sinners, tax collectors and prostitutes, thus revealing the true meaning behind the prophet Hosea’s call for “mercy, not sacrifice.”

“Those Pharisees were very religious in practice, but were unable to share a table with tax collectors and sinners,” he said. “While being faithful guardians of the law, they had no knowledge of God’s heart.”

Pope Francis called on the faithful to “look with mercy” upon others while reminding them that “we are all disciples in need of experiencing and living the comforting words of Jesus.”

“We all need to be nourished by the mercy of God because our salvation comes from this source,” the pope said.