Pope rails against clericalism, says pastors must ‘serve, not use’ laypeople 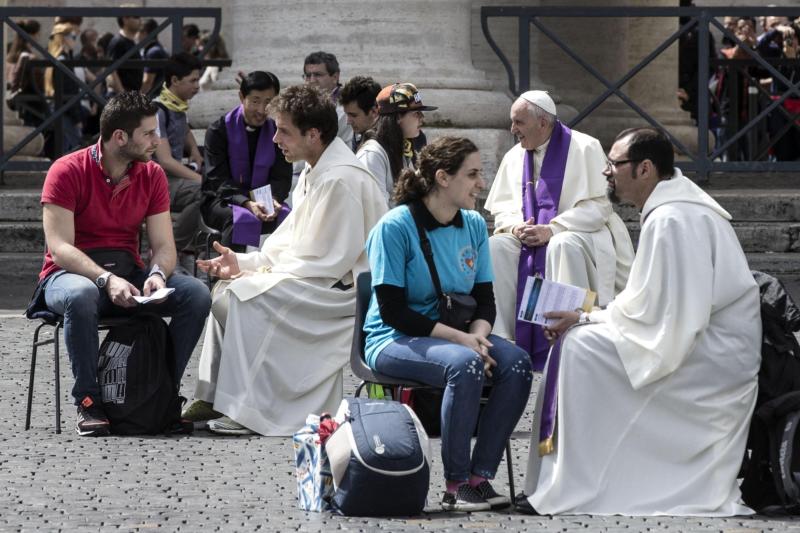 Pope Francis and priests hear confessions from young people April 23 in St. Peter's Square at the Vatican. Youth from around the world flocked to Rome for a special Year of Mercy event for teens ages 13-16. (CNS photo/Angelo Carconi, EPA)

VATICAN CITY (CNS) — Clericalism is a danger to the Catholic Church not only because on a practical level it undermines the role of laity in society, but because theologically it “tends to diminish and undervalue the baptismal grace” of all believers, whether they are lay or clergy, Pope Francis said.

“No one is baptized a priest or bishop,” the pope said in a letter to Cardinal Marc Ouellet, prefect of the Congregation for Bishops and president of the Pontifical Commission for Latin America. The fundamental consecration of all Christians occurs at baptism and is what unites all Christians in the call to holiness and witness.

In the letter, released at the Vatican April 26, Pope Francis said he wanted to ensure that a discussion begun with members of the Pontifical Commission for Latin America March 4 “does not fall into a void.”

The topic of the March discussion, he said, was on the public role of the laity in the life of the people of Latin America. In the letter, Pope Francis said that in lay Catholics’ work for the good of society and for justice, “it is not the pastor who must tell the layperson what to do and say, he already knows this and better than we do.”

“It is illogical and even impossible to think that we, as pastors, should have a monopoly on the solutions for the multiple challenges that contemporary life presents,” he said. “On the contrary, we must stand alongside our people, accompany them in their search and stimulate their imagination in responding to current problems.”

Pastors are not conceding anything to the laity by recognizing their role and potential in bringing the Gospel to the world; the laity are just as much members of “holy, faithful people of God” as the clergy, the pope said. “We are called to serve them, not use them.”

Pope Francis insisted that the discussion on the role of the laity must not fall into the trap of thinking “the committed layperson is one who works for the church or is involved in matters of the parish or diocese” — creating a “lay elite” — but must recognize that most Catholic laypeople live their Christian commitment in their homes, neighborhoods, cities and countries.

“The faith we have received is a gift that came to us, in many cases, from our mothers and grandmothers. They were the living memory of Jesus Christ within our homes. It was in the silence of family life that most of us learned to pray, to love and to live the faith,” the pope wrote. Ignoring the role the laity always have played in passing on the faith is dangerous, he said.

In societies where “the disposable culture is established, leaving little space for hope,” the pope wrote, committed Catholic laity and their families “seek not only to survive, but among the contradictions and injustices, they seek the Lord and desire to give witness to him.”

“What does it mean for us pastors that the laity are working in public life?” the pope asked. “It means we must try to encourage, accompany and stimulate all the attempts and efforts that they already are making to keep alive hope and faith.”

NEXT: Vatican suspends outside audit while reviewing contract