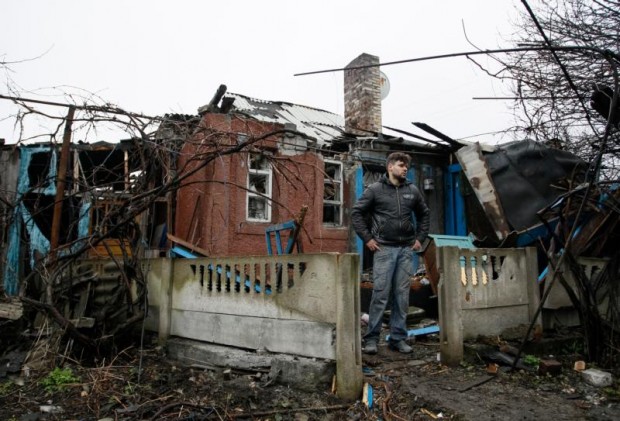 A man stands in front his damaged house after shelling March 24 in the Ukrainian town of Makeevka. (CNS photo/Alexander Ermochenko, EPA)

The 2-year-old war has caused thousands of deaths and forced more than 1 million people to seek refuge abroad, the pope said.

After Mass April 3, Divine Mercy Sunday, Pope Francis asked that Catholic parishes throughout Europe take up a special collection April 24 as a sign of closeness and solidarity with people suffering because of the war in Eastern Ukraine.

He prayed that the collection also “could help, without further delay, promote peace and respect for the law in that harshly tried land.”

Ukrainian Bishop Borys Gudziak of Paris, head of external church relations for the Ukrainian Catholic Church, said the three things needed most are “to pray for peace and justice in Ukraine, to stay informed regarding the true situation in this ancient European land and to show your solidarity.”

In a statement sent to the media on April 14, Bishop Gudziak said that after two years of war, there are “1.7 million internally displaced people and a million refugees in neighboring countries. Half a million do not have basic food and hundreds of thousands do not have access to safe drinking water.”

In March 2014, Russia annexed the Crimea region of Ukraine, and about a month later, fighting began along Ukraine’s eastern border. Russian-speaking separatists with support from the Russian government and its troops have been battling Ukrainian forces.

Jesuit Father David Nazar, rector of the Pontifical Oriental Institute and former superior of the Jesuits in Ukraine, said April 13, “There is a great human need that’s been lost in the media,” which is no longer covering the war.

“The Russian military presence is still very strong, and increasing day by day,” said Father Nazar. “The diplomatic community knows this, the parliament knows this, there are always negotiations going on at that level. But the general populace has forgotten about this.”

But Bishop Gudziak said the Ukrainian people have not lost their hope and faith: “Despite their suffering, Ukrainians believe that God has not forsaken them. Indeed, he has not forgotten them.”

Since the crisis began, Caritas Ukraine, the charitable agency of the Eastern-rite Ukrainian Catholic Church, and Caritas Spes, the charity of the Latin-rite church, have been assisting the displaced as well as those still living in the conflict zone.

“Sometimes when the fighting is going on, we have to put our operations on hold and wait. It is very difficult to live with the fact that these people need our assistance and we cannot reach them,” said Hryhoriy Seleshchuk, coordinator of humanitarian aid for Caritas Ukraine.

“It is even harder to know that there are millions of people in need in areas beyond government control and that we can only send through a very limited amount of aid,” Seleshchuk said in an article posted on the website of Caritas Internationalis, the umbrella organization for Catholic aid agencies.

Other members of the Caritas federation have been assisting Caritas Ukraine. The U.S. bishops’ Catholic Relief Services and Caritas Austria, for example, have provided funding to set up six centers for displaced children, providing them with fun activities, but also psychological support.

PREVIOUS: Refugees are not a problem, they are a gift, pope says