Saint’s relics found in rubble of church destroyed by terrorists 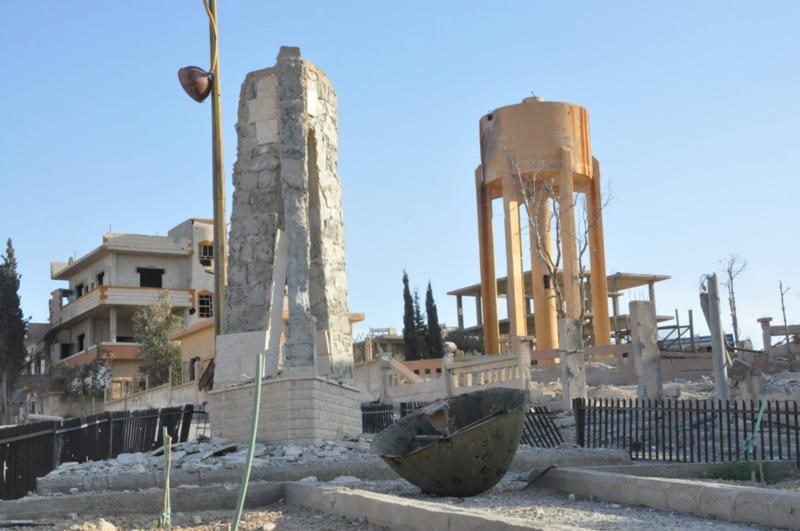 A view shows the damage in the town of Qaryatain, Syria, April 4, after forces loyal to Syrian President Bashar Assad recaptured it. The relics of Syrian St. Elian, which originally were thought to have been destroyed by members of the so-called Islamic State militia, have been found amid the rubble of the desecrated Mar Elian Church in Qaryatain. (CNS photo/Syria's national news agency handout via Reuters)

VATICAN CITY (CNS) — The relics of Syrian St. Elian, which originally were thought to have been destroyed by members of the so-called Islamic State militia, have been found amid the rubble of the desecrated Mar Elian Church in Qaryatain, Syria.

The sanctuary was bulldozed in August 2015, according to Fides, the news agency of the Congregation for the Evangelization of Peoples. Father Jacques Mourad, the prior of the Syriac Catholic monastic community, was kidnapped three months earlier when the terrorists initially raided the church.

Father Mourad, who was freed Oct. 11, reported the discovery of the relics to Fides April 5. “The fact that the relics of Mar Elian are not lost is for me a great sign: It means that he did not want to leave the monastery and the Holy Land,” the priest said.

The relics of St. Elian, a third-century martyr, were discovered after Syrian military forces had retaken control of Qaryatain.

Even while the Islamic State forces controlled the area, however, local Christians preserved their veneration of St. Elian, Fides said.

A priest of the Syriac Catholic Archdiocese of Homs and monks from the Mar Musa monastery were set to go to Mar Elian to survey its condition, Fides reported. Father Mourad asked that they collect and guard the remains.

“We know that the old sanctuary was destroyed, the archaeological site was devastated, while the new church and monastery were burned and partly bombed,” he said. “The life of grace will bloom again around the memory of the saints. It will be a great blessing for our entire church.”

PREVIOUS: Peruvian-based movement distances itself from founder accused of abuse