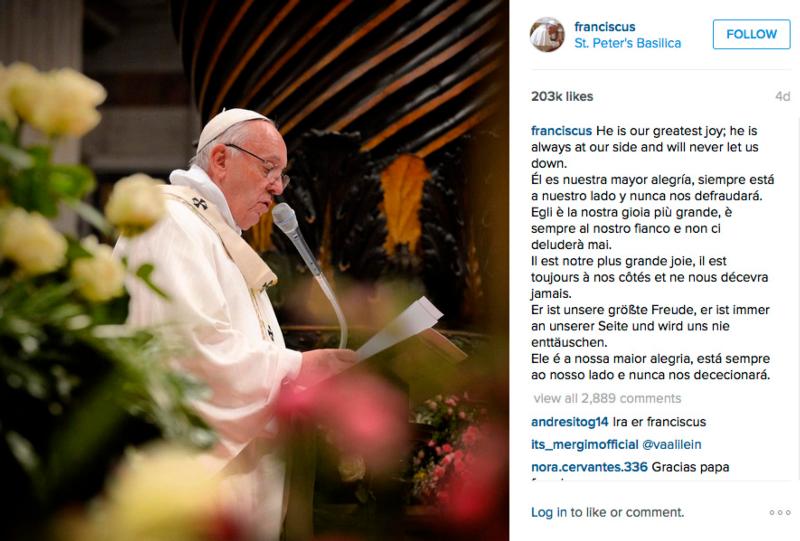 Pope Francis joined the photo-sharing site Instagram March 19 using the account "Franciscus." As of April 1 the pope had more than 2 million followers. This is a screen capture of a post on his page. (CNS photo)

The launch of the “Franciscus” account March 19, the feast of St. Joseph and the third anniversary of the formal inauguration of his papacy, was preceded by huge media coverage. But still, he hit the million-follower mark in just 12 hours, making his “our fastest growing account on Instagram to date,” said Stephanie Noon, an Instagram spokeswoman. The pope broke the record held for almost a year by former soccer star David Beckham, who took twice as long to gather 1 million followers.

Joining Instagram, Pope Francis jumped into a community that tends to be younger and more complimentary than people on Twitter, although with similarly impressive “engagement rates.”

“Twiplomacy,” an annual study conducted by the communications firm Burson Marsteller, found Pope Francis — through his @Pontifex accounts in nine languages — to be the most influential world leader on Twitter three years running. U.S. President Barack Obama has more followers, but Pope Francis’ average “retweet” and “favorite” rate is more than eight times higher than Obama’s.

Pope Francis’ Instagram account is showing a similar pattern. The 17 photographs and two video clips posted by early morning March 31 had an overall average of 212,200 “likes” and 6,299 comments each.

The photos on the Franciscus account are taken by photographers at L’Osservatore Romano, the Vatican newspaper. They are posted by staff at the Secretariat for Communications.

Msgr. Dario Vigano, prefect of the secretariat, told Vatican Radio, “The idea is to recount the story of a pontificate through images to let everyone who wants to accompany or wants to know the papacy of Pope Francis enter into his gestures of tenderness and mercy.”

While the @Pontifex twitter account is “institutional” — it was launched by now-retired Pope Benedict XVI in 2012 — the Vatican’s choice of the more personal “Franciscus” as the account name was dictated by reality of the platform, Msgr. Vigano said.

The photo-sharing site uses images as an “iconic sign,” he said, and so “immediately evokes the face, the smile and the posture of the pope. Every pope has his own facial expressions and his personal way of looking at people, caressing them and blessing them.”

“Instagram is mostly about pictures, which makes it a very effective way to spread Francis’ message of tenderness,” said Greg Burke, assistant director of the Vatican press office. “If people are looking at their phones 150 times a day, it’s good they see something a little more profound than pictures of food.”

After settling down for a few days, the comment rate on the pope’s account spiked March 29 after the Vatican posted a video clip with the hashtags tenderness, mercy and Catholic.

The video opened with the pope blessing the obviously pregnant belly of a woman and included scenes of a little boy taking the pope’s zucchetto and Pope Francis and retired Pope Benedict XVI greeting each other. The more than 6,300 comments it attracted remarked particularly on the beauty of the gestures and expressed enthusiasm for Pope Francis.

The video was among the first on Instagram to be 60 seconds long, Msgr. Vigano said. The social media company had just announced that day that gradually users would be able to exceed the previous 15-second limit.

The video and its popularity illustrates how “a gesture of love is more obvious than a speech about love,” said Jesuit Father Antonio Spadaro, author of “Cybertheology: Thinking Christianity in the Era of the Internet” and editor of “La Civilta Cattolica.”

The Jesuit told Catholic News Service that while the pope communicates well verbally and in writing, his message is wrapped in “his closeness, his gestures and his physicality, which photos communicate.”

Father Spadaro also said members of the Instagram “community,” like many people today, take photographs primarily to share an event rather than to preserve a memory. “Who looks through old photos anymore?” he asked.

He also insists that Pope Francis has been on Instagram since the moment of his election — through the photographs shared by people who have seen him in Rome and around the world. In fact, as CNN reported in March, “According to Instagram, his visit to the U.S. in the fall of 2015 generated 21 million posts, likes and comments from 9 million people.”

“A beautiful photo isn’t necessarily a perfect photo,” Father Spadaro said. A strong picture “communicates an event and emotion,” which in people’s photos of the pope can have a strong impact even if they are out of focus or taken from far off.

PREVIOUS: Pope to release document on the family April 8

NEXT: Sisters offer shelter in Tijuana for women and children escaping violence