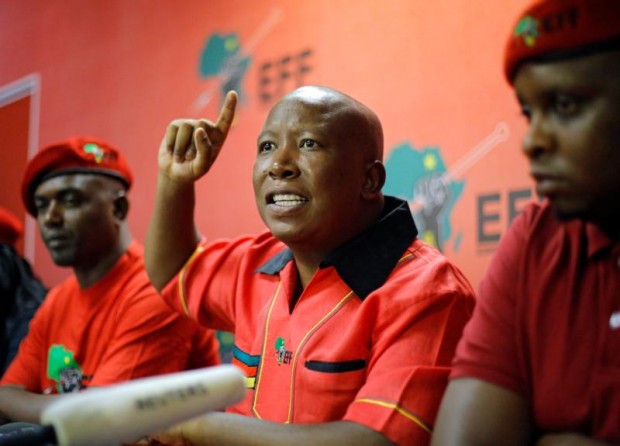 “We are deeply saddened to hear of war rhetoric by the leader of the Economic Freedom Fighters‚” Bishop Abel Gabuza of Kimberley, who chairs the Southern African Catholic Bishops’ Conference justice and peace commission, said in an April 25 statement.

Julius Malema, leader of the Freedom Fighters, said on national television April 24 that if the government continues to respond violently to protests, “We will run out of patience very soon and we will remove this government through the barrel of a gun.”

“We have seen the evil consequences of civil war in other African countries‚ including massive loss of lives‚ a refugee crisis and irreparable damage to the economy. We do not want our nation to take such a path,” Bishop Gabuza said. “We therefore appeal to all political parties to refrain from actions and rhetoric that could fuel election violence and civil war.”

Service delivery protests have become increasingly common and violent in recent months as anger mounts in poor communities over problems such as no running water in some areas and a lack of paved roads in others. Riot police with tear gas and stun grenades have been called in to quell many of these protests around the country.

The increase in violence by people protesting lack of service delivery and other issues “and the use of excessive force by the police” to curb the protests are deeply concerning, Bishop Gabuza said.

Excessive force as a deterrent will not solve the complex problem of violent protests‚ he said, noting that the government should tackle the causes of the protests, “including the rising economic inequalities‚ youth unemployment‚ a culture of patronage and the fierce scramble for political positions — especially when such positions are considered as an opportunity for self-enrichment.”

NEXT: Catholic agencies begin work of rebuilding after Ecuador quake