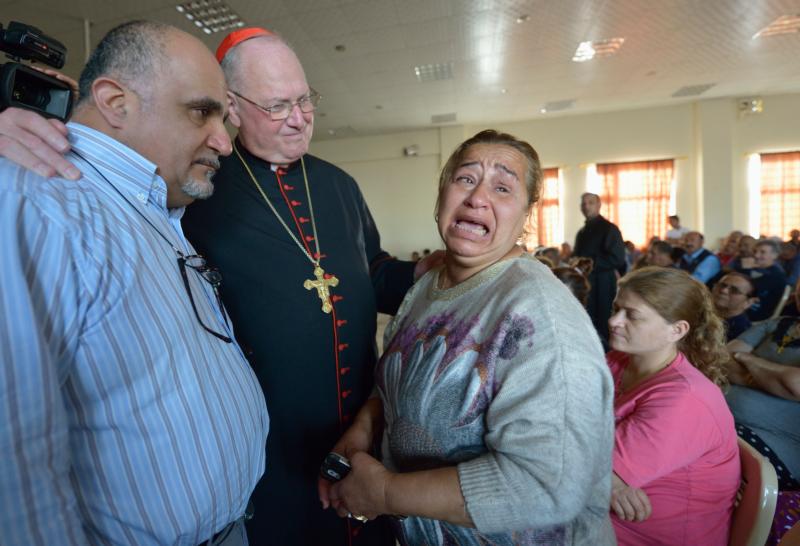 IRBIL, Iraq (CNS) — A delegation of U.S. Catholic leaders visiting northern Iraq was challenged to go home and work for peace in the troubled region.

“You have come to listen to your brothers and sisters in Iraq who are suffering. The situation is very hard. We cry out with one voice, ‘Don’t forget us,'” Auxiliary Bishop Shlemon Warduni of Baghdad said during a Mass in the small village of Inishke, near Dahuk.

The Chaldean Catholic service included members of the local Christian community, as well as Christians who were displaced by the Islamic State group from elsewhere in Iraq. Representatives of the Yezidi and Muslim communities also greeted the delegation, which was headed by Cardinal Timothy M. Dolan of New York, chair of the Catholic Near East Welfare Association. He was accompanied by Bishop William F. Murphy of Rockville Centre, New York, who is also on the CNEWA board.

The group spent April 9-11 in Kurdistan, the autonomous region of northern Iraq. When Islamic State swept through Mosul and Qaraqosh in 2014, more than 125,000 Christians, along with other victims, fled to safety in Kurdistan, where CNEWA has helped local churches construct housing, clinics and schools.

“We don’t want anything. Iraq is very rich, but now it is very poor. We only want our rights to go back to our homes and villages,” he said.

Looking directly at Cardinal Dolan, Bishop Warduni said: “We need a good Samaritan, but a new one, and this is you, along with the other leaders who came with you. We thank you and your people, for they have done so much for us with their prayers and with their money. But we ask you to ask your government to establish peace in our country. Tell your president, please, that our children and our youth want to grow in freedom. Your Eminence, take with you our good wishes to your faithful, and don’t forget us.”

In his homily for the Mass, Cardinal Dolan told those packed into the small church: “You are now suffering away from your homes and families. You are on the cross with Jesus. But we can never forget that Easter always conquers Good Friday. The resurrection always triumphs over the cross.”

Speaking through a translator because the service was in Aramaic, Cardinal Dolan said: “Jesus is alive in the love and charity that his people have for one another. That is why in our time here in Kurdistan we have seen Jesus alive in hospitals and clinics and refugee camps and schools and parishes like this. And it is our privilege to be able to be part of this love and charity that you have for one another here.”

“We have come to tell you we love you very much,” Cardinal Dolan said. “We know of your suffering. And we can never forget you.”

In an April 11 Mass in a camp for the displaced in Ankawa, on the outskirts of Irbil, the delegation got the same message it heard the previous day.

“We feel very grateful for this fraternal solidarity that you are showing. And we all do hope that you will intervene with your government, with those who have a word to say on the international scene, to be faithful to the principles on which your country was founded. That includes the right of all people, every human being, to live in freedom and dignity,” Syriac Catholic Patriarch Ignace Joseph III Younan said in his homily.

“When we see that strong nations like yours uphold the rights of those who have been uprooted, at that time we will really live the hope of the resurrected Lord Jesus Christ.”

In an interview at the end of the visit, Cardinal Dolan told Catholic News Service that the pastoral visit would provoke renewed advocacy back home.

“We value the relationship we have with our government, but we sometimes smile when outsiders think we have a lot more clout than we really have. But that’s not going to stop us from trying,” the cardinal said. “When we get back, Bishop Murphy and I will brief our fellow bishops and the Holy See, and we will share with our political leaders what we have seen and heard. We owe it to the people here because they have asked us to do that.”

Cardinal Dolan acknowledged that the church’s counsel was rejected in the lead up to the 2003 U.S. invasion of Iraq, which many believe helped create the conditions from which Islamic State emerged.

“Catholics in the United States can at least be grateful that, more often than not, the church has been on the right side when it comes to these issues,” Cardinal Dolan said. “Pope St. John Paul II told our presidents, ‘This will be a road of no return, and you will look back in future years and regret what you’re doing.'”

Bishop Murphy said the U.S. bishops always spoke of the need for caution in the region.

“Maybe we were too cautious with our cautionary words, and I think you could make a case for that, but there are a lot of people who have strong opinions against what happened who voted for it at the time. We never did,” he told CNS.

As they visited with the displaced and the pastoral workers who accompany them, some of what the U.S. church leaders saw and heard was not easy to experience. In an April 9 public forum in a displaced camp in Ankawa, Amal Mare was one of several displaced persons who offered testimony. She praised local Christians for welcoming her family when they fled from Qaraqosh.

“Yet when are we going to be able to leave? We are living here in misery, and we want to go back to Qaraqosh,” she said, sobbing as Cardinal Dolan embraced her. “We miss our churches. We are sons and daughters of the church. Here we created a church in this hall, and every night for the last 18 months we have all prayed the rosary here. But now we’re losing hope. How much longer will we have to wait?”

Meeting April 9 with a group of students at the Chaldean Catholic St. Peter’s Seminary in Irbil, Cardinal Dolan told the seminarians that they had good models of ministry from which to learn.

“Pope Francis keeps saying that we priests must be with our people. We just came from a refugee camp where we met a priest who slept outside on his mattress because he said he couldn’t sleep inside if his people were outside. We’ve met with sisters and priests who walked with the people from Mosul as they were fleeing. That’s the model of the priesthood. That’s Jesus. To be with our people all the time, to be especially close to your people in the difficult times,” the cardinal said.

Bishop Murphy told the seminarians he was impressed by their faithfulness in the midst of violence and terror.

“Although these are difficult times, the church has always known difficult times. You lift me up. It is the strength of your faith that has brought you here, and it is that faith which gives me great hope for your future,” he said.

The head of the Chaldean Catholic community in Kurdistan, which has provided a variety of services to the displaced, praised the church leaders’ visit.

“It has been a visit of solidarity, a visit of love, a visit of hope, where we can really feel that we are not forgotten, that we’ve been in the prayers of His Eminence and the bishops and the whole Christian community in America. It means a lot for us,” Archbishop Bashar Warda of Irbil told Catholic News Service.

“And once we’re not forgotten, we are sure they will make every possible effort to remind the politicians, to remind everyone, that there are persecuted, vulnerable communities in Iraq. They are Christians, Yezidis and others, and we have to do something for them. We are brothers, and whenever a brother suffers or experiences sadness, the family gets together, prays together, and works together to overcome this.”

In addition to Cardinal Dolan and Bishop Murphy, the delegation included Msgr. John Kozar, president of CNEWA, and Msgr. Kevin Sullivan, executive director of Catholic Charities for the Archdiocese of New York.

PREVIOUS: Pope to visit Armenia in June, then Georgia, Azerbaijan in autumn