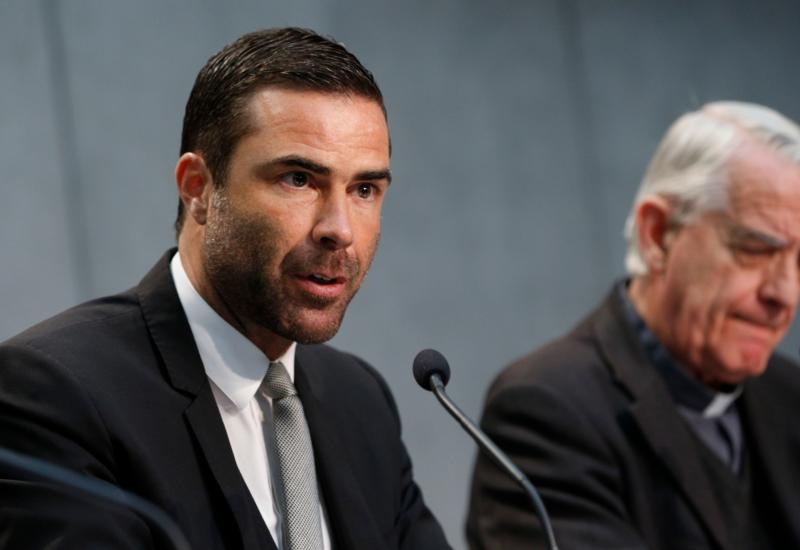 Rene Brulhart, president of the Financial Intelligence Authority, speaks during a briefing on the 2015 annual report of the Vatican's financial watchdog agency at the Vatican April 28. At right is Jesuit Father Federico Lombardi, papal spokesman. (CNS photo/Paul Haring)

VATICAN CITY (CNS) — The Vatican’s financial watchdog agency reported a huge jump in the number of financial transactions flagged as “suspicious” and in the value of assets it has blocked or frozen.

During 2015, the Financial Intelligence Authority “received 544 reports of suspicious activities — almost three times as many as 2014,” it said in its annual report, released April 28.

“This was not due to a higher financial crime rate,” it said, but because policies were being implemented, procedures for reporting had been strengthened and Vatican personnel were more aware of their duty to report questionable activity.

Rene Brulhart, president of the Financial Intelligence Authority, and Tommaso Di Ruzza, its director, presented the agency’s annual report for the fourth time since the agency was established by Pope Benedict XVI in 2010. It monitors Vatican financial operations to ensure they meet international norms against money laundering and the financing of terrorism.

The 27-page report said, 2015 “marked a turning point” in that the agency helped the Vatican transition from setting up a structural and legal framework to bringing about “its effective functioning” and implementation.

“Complex processes,” it said, were finally wrapped up, including a complete review of all Vatican bank accounts, resulting in a total of 4,800 accounts being closed, following stricter guidelines for identifying and verifying customers entitled to hold accounts there.

Once cases are flagged, Di Ruzza told reporters, the authority “filters” out which ones merit investigation and passes the report on to the Vatican’s judicial system.

In 2015, just 17 reports of suspicious activity out of the 544 received were handed over to judicial authorities. Vatican judges received only seven and eight reports in 2014 and 2013, respectively.

In its report released in December 2015, Moneyval — the Council of Europe’s Committee of Experts on the Evaluation of Anti-Money Laundering Measures and the Financing of Terrorism — praised the Vatican for significant steps in establishing laws and procedures in line with international protocols, but called for “real results” in cracking down on infractions.

The Financial Intelligence Authority also said in its 2015 report that it no longer has oversight control of the Administration of the Patrimony of the Holy See, commonly referred by its Italian acronym APSA.

“APSA,” it said, “stopped being a part of (the financial intelligence authority’s) jurisdiction at the end of 2015” — the same year the authority had filed a report with the Vatican judicial authorities asking they investigate allegations APSA accounts had been used for money laundering, insider trading and market manipulation.

Di Ruzza told reporters that a three-year long study and inspection of APSA showed its financial activities were no longer “on a professional basis,” meaning the assets it manages are owned by the Holy See and are used just to fund activities of the Roman Curia — basically serving as the Vatican procurement agency.

Also, Pope Francis’ creation of the Council and Secretariat for the Economy in 2014 meant APSA would be supervised by that entity, he said. The secretariat, currently headed by Australian Cardinal George Pell, is in charge of supervising all administrative and financial activities at the Vatican, and implementing the norms made by the Council for the Economy. An auditor’s office also investigates any signs of corruption, fraud and “anomalous activity” or irregularities concerning financial activities, budgeting, bookkeeping and the offering of outside contracts or services.

The same day Brulhart and Di Ruzza briefed the press, Pope Francis visited APSA and the Secretariat for the Economy as part of an ongoing series of impromptu visits to Vatican offices.

NEXT: Mapping with the stars: Nuns instrumental in Vatican celestial survey