When it comes to happiness, there’s no app for that, pope tells teens 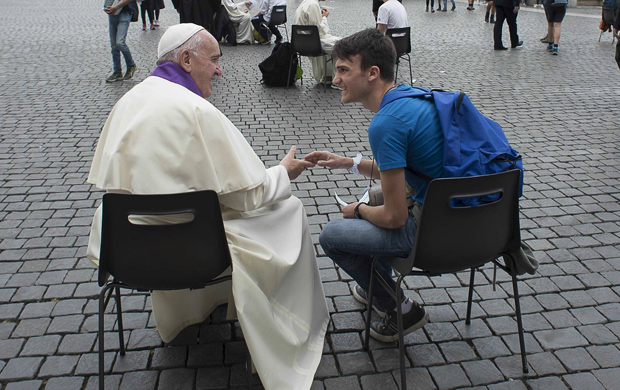 Pope Francis hears confession of a youth April 23 in St. Peter's Square at the Vatican. (CNS photo/L'Osservatore Romano via Reuters)

VATICAN CITY (CNS) — Happiness “is not an ‘app’ that you can download on your phones nor will the latest update help you become free and great in loving,” Pope Francis told thousands of teenagers.

Youth from around the world flocked to Rome for a special Year of Mercy event for teens aged 13-16. The celebrations began April 23 with confessions in St. Peter’s Square.

The pope caught many off guard as he made an unannounced visit to the square. After greeting several people, he placed a purple stole over his shoulders and sat down, joining more than 150 priests offering the sacrament of reconciliation.

Jesuit Father Federico Lombardi, Vatican spokesman, said the pope “listened to the confessions of 16 boys and girls,” spending more than an hour in the square.

Celebrating Mass with the young people April 24, the pope told them true freedom is priceless and comes from making the courageous decision to do good and not from the mediocre belief that happiness can be easily obtained through worldly possessions and fashion.

A person’s happiness has “has no price and cannot be bought,” the pope told them during the Mass in St. Peter’s Square.

Gray clouds looming over St. Peter’s Square did little to deter an estimated 100,000 young teens and pilgrims from attending the final Mass of the jubilee celebration.

In his homily, the pope encouraged the youths to carry out the “enormous responsibility” entrusted to the disciples by Jesus in the Sunday Gospel reading: “By this everyone will know that you are my disciples, if you have love for one another.”

Love, he said, is the “only valid ‘document’ identifying us as Christians” and the only path to happiness.

True love is free “without being possessive” of people or worldly things, he said. “There is always a temptation to let our affections be tainted by an instinctive desire to take, to have what we find pleasing; our consumerist culture reinforces this tendency. Yet when we hold on too tightly to something, it fades, it dies and then we feel confused, empty inside,” he said.

The freedom that comes from love, he continued, does not come from “doing whatever you want,” which only makes people “self-centered and aloof,” but is a gift that comes from “being able to choose good.”

“Be skeptical about people who want to make you believe that you are only important if you act tough like the heroes in films or if you wear the latest fashions. Your happiness has no price; it cannot be bought,” the pope stressed.

The first day of the celebration ended late April 23 with music and testimonies at Rome’s Olympic Stadium for an estimated 70,000 youth. In a video message played at the rally, Pope Francis compared the absence of Jesus in one’s life to being somewhere without a cellphone signal so it is impossible to connect with each other.

“Just remember that if Jesus is not in your life, it is as though there was no signal,” he said. “Let’s always place ourselves where we have the signal: the family, the parish, the school, because in this world we will always have something to say that is good and true.”

The youths had made a pilgrimage to the Holy Door at St. Peter’s Basilica, and the pope told them, “Do not forget that the door is the encounter with Christ, who introduces us to the Father who asks us to be merciful as he is merciful.”

Reminding them of the importance of simple gestures in carrying out works of mercy, the pope said that to be merciful with others, one must first be able to forgive. Resentments or the desire for revenge are like a worm that “eats away at the soul and does not allow us to be happy,” he said.

“Let us forgive and forget the wrong done to us; in this way we can understand the teaching of Jesus and be his disciples and witnesses of mercy,” he said.

PREVIOUS: Church is no longer ‘church of the poor,’ says Indian theologian nun

NEXT: New nuncio to U.S. says he’s ready to listen and learn