Bonner students hear of saintly priest who was ‘just like you’ 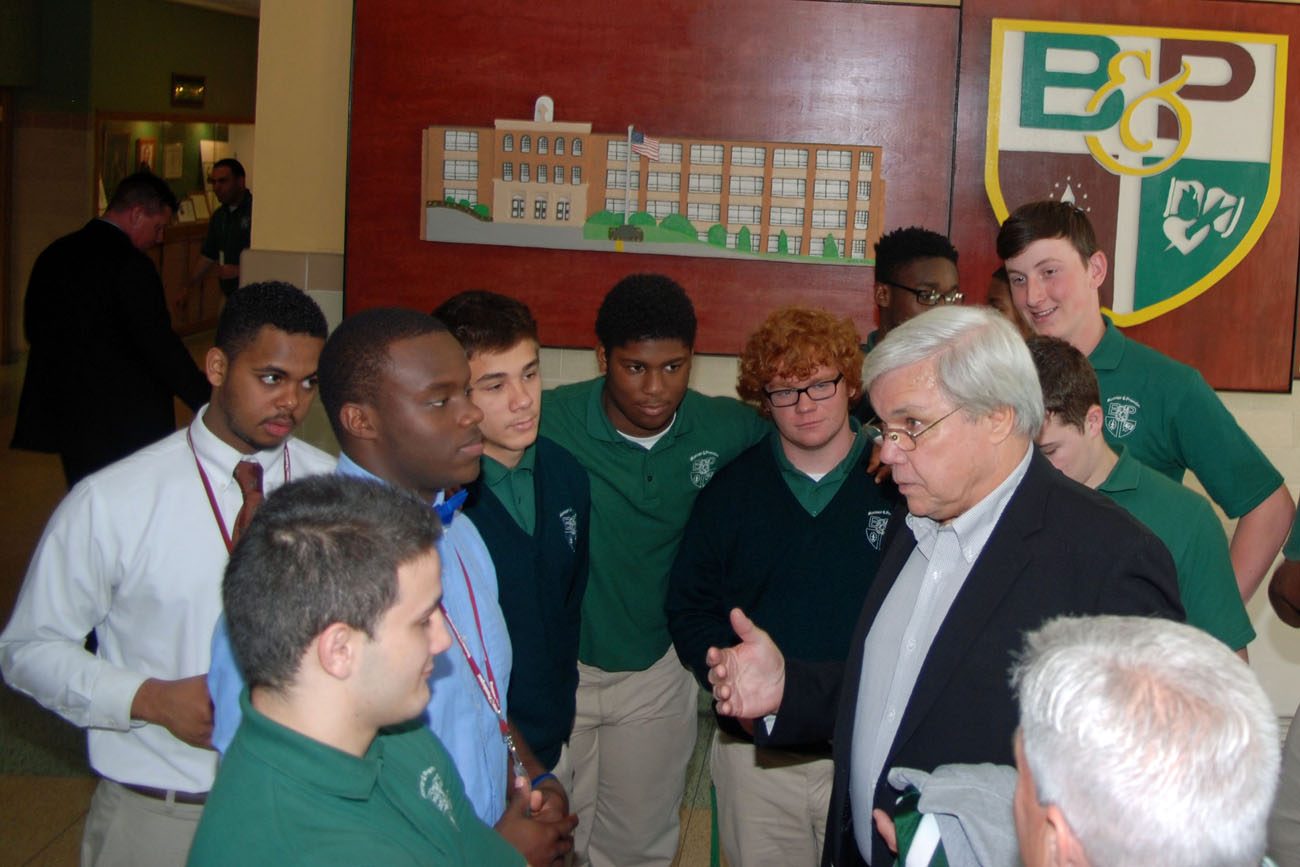 Al Atkinson, a brother of Augustinian Father Bill Atkinson who died in 2006, speaks to some of the football players at Msgr. Bonner and Archbishop Prendergast High School during a visit to the school May 20. Atkinson, a former pro football player with the New York Jets, presented the school with a gold football from the NFL commemorating his play in the 1968 Super Bowl. (Photo by Deacon John Rodgers)

The assembly students of Msgr. Bonner and Archbishop Prendergast Catholic High School in Drexel Hill attended Friday, May 20 probably held the same appeal as any other: It got them out of class.

But by the end of the hour-long presentation, many were actually glad they went.

The assembly’s purpose: To introduce them to a distinguished alumnus and renowned faculty member, a man whom they have never met and never will, not in this life, for he died in 2006.

That man was the Servant of God Father Bill Atkinson, O.S.A., a Bonner graduate and teacher until 2004, when his health forced him to retire. His cause for beatification is now underway.

For those unaware of Father Atkinson, he was an athletic young man who had entered the Augustinian order’s novitiate following high school. On Feb. 22, 1965, the novices had the day off and snow had fallen the night before.

Atkinson and several classmates decided to make a toboggan run down a nearby hill. They went off course and ran into a tree, head on. Atkinson was in front, and his head took most of the blow. No one else was hurt.

Following convalescence at Magee Rehabilitation Hospital, he reentered the Augustinians. After completing all the requirements for ordination, only one obstacle remained: The church had never ordained a quadriplegic to the priesthood before.

Despite this, Blessed Pope Paul VI gave Bill a special dispensation and on Feb. 2, 1974, he was ordained a priest by Cardinal John Krol. For the next 30 years Father Atkinson taught at Msgr. Bonner High School.

The only thing he could do for himself was move his electric wheelchair. Everything else required assistance, which he endured with heroic patience and grace. His cause for sainthood was introduced last fall.

The purpose of last Friday’s assembly was to help students “understand who Father was, personally — not just as someone whose name we bring up quite often, but to know him personally,” said Grace Kane, an English teacher at the school and a colleague and friend of the priest.

Mullen started off by telling students about her brother’s life and what he was like growing up. “On Sunday he liked to watch a football game with a hoagie and a beer. He played a mean game of pinochle. And he put ketchup on everything,” she said.

But she pointed out to the students that “Bill was your average ordinary teenager just like you, running to class just like you, sitting in assembly just like you, forgetting his lunch. He experienced frustration, problems in school, SATs, home life, illnesses, just like you may be experiencing. Some of his hurdles were extraordinary, but remember, he never surrendered to them.”

Next up was high school friend Lon Barrone, who sat next to Father in homeroom. He said one day he came in very sad about some things happening in his life at the time. He asked Atkinson, “What do you do?”

Barrone said Atkinson “kinda shrugged and looked at me and said, ‘Gosh, when things get that bad, I just look up and say, “Thy will be done.”’

“‘What?’ Barrone remembers thinking. “Bill was a lot of things back then, but religious wasn’t the first thing that popped into my mind when I thought about him. ‘Thy will be done.’ I said the ‘Our Father.’ I had no idea that the words actually meant anything. But they meant something to Bill. ‘Thy will be done.’”

Barrone spoke of how Father Atkinson took the word “can’t” as a personal challenge. People kept telling him “you can’t” do this or that. Time and again, the Servant of God proved them wrong.

“Ever since then to this very day, whenever I feel like I can’t do it, I imagine myself walking up to Bill … and saying, ‘I can’t do it.’ And I find that the words won’t come,” Barrone said. “That was his gift to me, but it’s also his gift to you.

Ralph Celidonio not only coached an adolescent Bill Atkinson in CYO but also at Msgr. Bonner, and later taught alongside him when the priest joined the school’s faculty.

When he learned about Father Atkinson’s accident, he thought, “Why would God let something like that happen to a good person? And that question comes up often in our lives. You hear about it all the time. Tragedies happen to good people.

But Celidonio called the accident “a blessing” because of the thousands of people Father Atkinson helped through the years.

“Not just Bonner people but people from all around, people from other countries who heard about him going on and becoming a priest and helping others and being able to overcome the tremendous handicap that he had,” Celidonio said. “There is a God, and God does work in strange ways.”

If the assembly’s purpose was to make Father Atkinson better known to the students, it evidently succeeded.

According to sophomore Theodore Greiner, the assembly “really helped me to see who Father Bill was as a person, and not just a name. It was so well executed and incredibly sincere, and I think that’s what made it so powerful.” 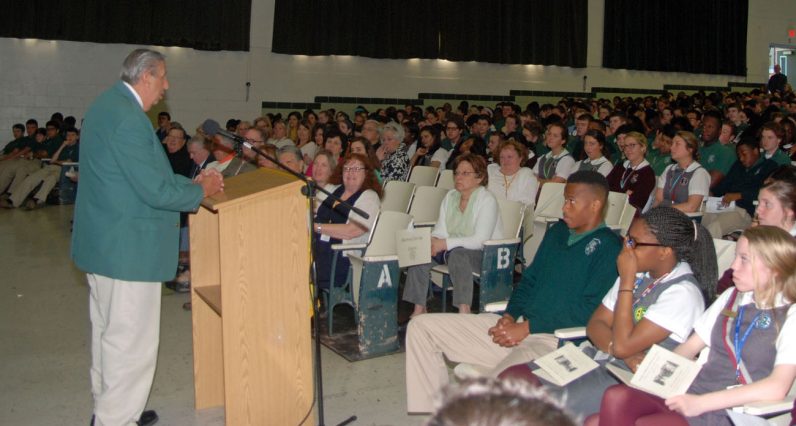 Ralph Celidonio, who coached Father Bill Atkinson in CYO sports and later taught with him at Msgr. Bonner high School, speaks to students of the school May 20. (John Rodgers)