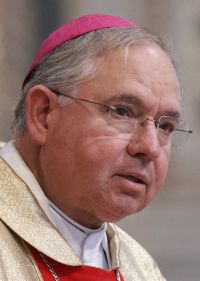 WASHINGTON (CNS) — Archbishop Jose H. Gomez of Los Angeles said in a May 25 statement that a planned increase in federal immigration raids is “yet another depressing sign of the failed state of American immigration policy.” The raids were announced in mid-May.

Archbishop Gomez’ comment was echoed by Seattle Auxiliary Bishop Eusebio L. Elizondo, chairman of the U.S. bishops’ Committee on Migration. The archbishop is chairman-elect of the committee.

“These operations spark panic among our parishes,” Bishop Elizondo said in a May 25 statement. “No person, migrant or otherwise, should have to fear leaving their home to attend church or school. No person should have to fear being torn away from their family and returned to danger.”

While saying he recognized the federal government’s role in upholding immigration laws, he said the deportations would not be “an effective deterrent” to migration because these “vulnerable populations” are facing a humanitarian crisis in their home countries.

On May 24, U.S. Immigration and Customs Enforcement personnel deported a mother and her 14-year-old daughter from the South Texas Family Residential Center in Dilley, Texas.

ICE took the action despite knowing that the family was afraid of being killed in their home country, that their asylum claim had never been heard, and despite knowing that attorneys had requested a stay of removal and were in the midst of filing an appeal, according to Katie Shepherd, managing attorney for the Cara Family Detention Pro Bono Project, which provides legal representation and undertakes advocacy on behalf of mothers and children held in federal family detention centers.

According to Shepherd, ICE also knew that attorneys had requested a stay of removal for the family and were in the midst of filing an appeal.

“ICE swiftly deported the mother and her child, informing counsel only after the fact. It is outrageous that, knowing that her appeal was in the works and that she had expressed a fear of return, ICE chose to hustle the family out of the detention center in the dark of night and put them on a plane before the courthouse doors opened,” Shepherd said in a May 25 statement.

“Just like in January, we are seeing mothers and children who are confused, disoriented, and terrified for themselves and their children,” she added.

In January, Bishop Elizondo and Bishop Kevin W. Vann of Orange, California, chairman of the Catholic Legal Immigration Network, wrote to Homeland Security Secretary Jeh Johnson about recent raids that had netted 121 undocumented immigrants in a three-day span, many of them mothers and children.

“Our organizations have firsthand knowledge that these actions have generated fear among immigrants and have made their communities more distrustful of law enforcement and vulnerable to misinformation, exploitation and fraud,” the two bishops told Johnson. “To send migrant children and families back to their home countries would put many of them in grave danger because they would face threats of violence and for some, even death.”

“This family is just the latest in the string of lives destroyed by a government that refuses to administer our refugee protection system with the care it requires. Sadly, ICE’s harsh enforcement tactics will put many more vulnerable people at risk,” said the Cara Project’s Shepherd.

Bishop Daniel E. Flores of Brownsville, Texas, also issued a statement May 25 about the new wave of deportation raids.

“Children and families should not be used as pawns in a politics of deportation aimed more at maintaining the illusion that we have a viable immigration policy in this country than at actually addressing the issue,” he said. “The entire system needs reform; it fails to protect the most basic of human goods. Those fleeing violence should be accorded due process protection.”

Over the past year or more, the Brownsville Diocese, which is in the Rio Grande River Valley, has had an increase of immigrants with numbers as high as 200 on some days. Mostly from Central America, the immigrants receive help at the diocesan respite center at Sacred Heart Church in McAllen at continue north to other states.

Michelle Mendez, who represents some clients for CLINIC and does training and legal support as well, also moderates a closed Facebook page for women who were detained. Introduced just last October, the group, she said, now has 750 members.

Having worked in direct services for many years prior to joining CLINIC, Mendez said, “I learned that clients, despite lacking sophistication in some areas, had on their phones What’s App or something that’s cheaper to call internationally and Facebook, because they want to connect with folks all over.”

On the page, “we give them guidance on the removal proceedings,” Mendez said. “They have a lot of misinformation or lack of information. They think that reporting to ICE on a monthly basis is the same as going to court. Or that changing your address with ICE is the same as changing your address with the court.” Neither is true, she added, and some women have been tripped up by this false belief.

NEXT: Ecumenical officers hope to enrich the work of Christian collaboration