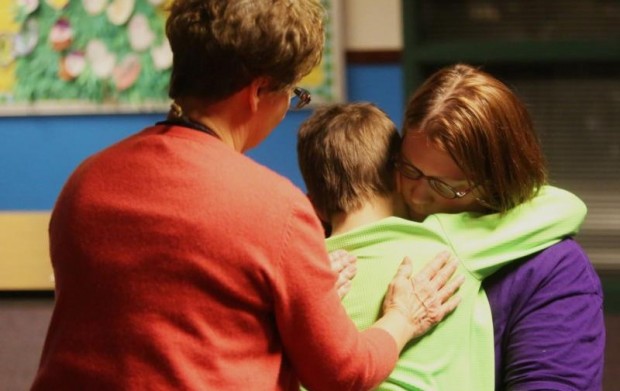 Bonnie Serio, a pastoral care specialist, comforts 8-year-old Max as he hugs his mother, Debbie Gonsioroski, right, during a March 3 session of Partners Around Loss through Support, or PALS, at Faithful Shepherd Catholic School in Eagan, Minn. (CNS photo/Dave Hrbacek, The Catholic Spirit)

EAGAN, Minn. (CNS) — In 2014, Veronica Rosa and her family were hit hard. Three months after their divorce, her ex-husband died.

Rosa, 40, a parishioner of St. John the Baptist Church in Savage, sought help for her grieving 12-year-old son. She found it in Partners Around Loss through Support, or PALS, a bereavement group primarily for children sponsored by St. John Neumann Church in Eagan.

“Max has a lot of friends that come from a two-parent household (and) a lot of friends that have single parents. But he doesn’t have any friends who’ve lost a parent to death, so he can’t really talk to anybody about it,” Gonsioroski said. “And it’s just a place that he can come and talk.”

Gonsioroski said Max doesn’t usually talk about his father’s death or his feelings. But after leaving Faithful Shepherd Catholic School in Eagan, where PALS sessions take place, he opens up about his anger, grief, sadness and even happiness.

“This is just another piece to the puzzle to help Max in his grieving process,” Gonsioroski said. “There’s just a new way to do grief, and it’s not about hiding your feelings and being sad alone. It’s about being allowed to be sad with other people, but also to be happy and rejoice. Grief is so complicated.”

The PALS sessions also prompt conversations for Rosa and her son, whom she asked not to name, usually on the ride home afterward.

“We are closer from everything that’s happened,” Rosa said.

While Rosa sees how the group has helped her son, she said she also benefits from talking with other parents about trying to manage grief — her son’s and her own — amid daily life.

“For me, it’s been the only thing,” said Rosa, who also has seen a psychologist. “I don’t want to be the crier anymore. It was definitely comforting. At least I’m not alone.”

Alongside the families of PALS are the facilitators, a handful of dedicated women and men from St. John Neumann and St. Thomas Becket Church, also in Eagan, who devote hours to comforting the sorrowful regardless of religious affiliation.

Leading the charge is Bonnie Serio, 72, a parishioner and pastoral care specialist at St. John Neumann.

In 2002, Serio left her job as director of a grief program through the Archdiocese of St. Paul and Minneapolis to become the faith formation director at St. John Neumann. She brought Rainbows, an international, Christian-based bereavement program, with her, but transitioned it to PALS in 2014 to make the program more engaging for youth.

Although not every family PALS serves is Catholic or even Christian, Serio identifies the program as Christian. The Serenity Prayer, she said, has become its mantra.

“You truly have to delve into your own faith and your own heart and your own life,” she said. “The Catholic faith — that presence of Christ and the Holy Spirit — is ever present. I think you have to have life experiences that would draw you to something like this. My sadness is for people who don’t (have faith).”

Gearing up for the evening sessions, Serio prepares the lesson plans. She also screens and trains facilitators and works with the parish to ensure PALS is using resources wisely. The program is offered free of charge, but it asks for a free-will offering for some meals. Participants must sign a confidentiality agreement and abide by PALS guidelines.

Serio also lines up donated meals for the families. At first, she and the other facilitators did not realize how important providing a meal would be to the group dynamic.

“Families would usually be rushing, not having a chance to eat supper,” Serio said. “Or, they’d eat junk.”

While grief is the common denominator among the kids, they go to PALS for a variety of reasons, mostly divorce, death or mental illness in the family. With those issues come pressure, worry and frustration.

In the past year, 12 children ranging in age from 4 to 14 attended the 90-minute sessions one night a week from October to March. With their group leaders, they considered a variety of topics; a specific emotion served as each evening’s theme. Using age-appropriate games, crafts and the occasional science experiment, the kids talked about how to deal with their feelings.

“The biggest thing with this program is the fact that these kids feel different because of their loss,” said Annmarie Tenhoff, 60, a St. John Neumann parishioner who has volunteered since 2003. “When they are in these groups with kids who have suffered the same loss, it’s finally an environment where they can talk about it because they’re not different in that group. So, it’s kind of heart-warming to see that.”

By the looks of PALS’ last meeting in March, one would have a difficult time guessing the families gathered were there for grief support.

A group of boys huddled together, laughing. Parents showed each other and facilitators pictures on their smartphones. Their evident bond was a culmination of the opening meals and conversations they had shared over the months.

But this night was special.

First-year participants received a prayer shawl from St. John Neumann’s prayer shawl ministry. Parents gently wrapped the shawls around their children’s shoulders and vice versa. Families who had been in the program the previous year received an olive wood cross.

The night ended with families walking a labyrinth to symbolize their path forward together in prayer and gratitude. Parents and children who embraced in the center of the labyrinth shed tears, proving the exercise was powerful.

“You’re never going to get lost in a labyrinth,” Serio said.

The families departed with a Serenity Prayer card. Many plan to return next year.

NEXT: Sisters of Life hold up dignity of single moms in 25-year-old ministry