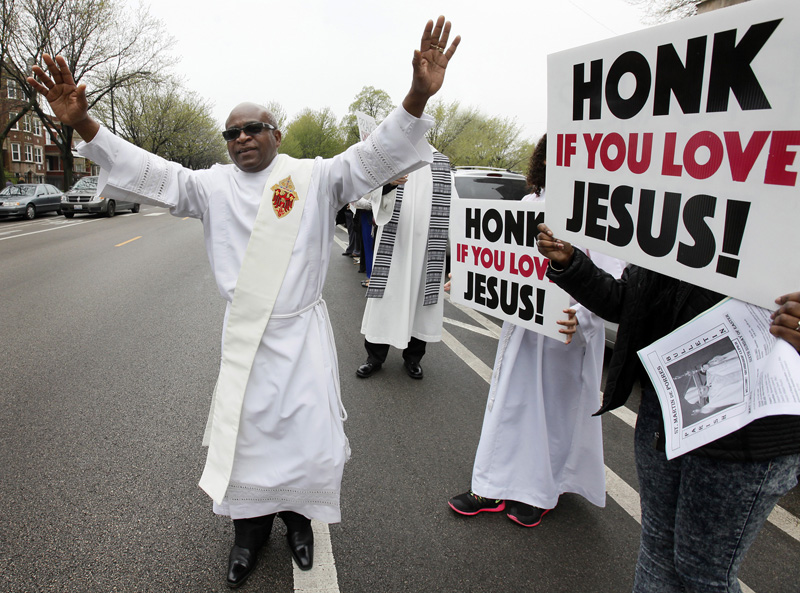 Deacon William Pouncy encourages drivers in passing cars to "Honk for Jesus" outside St. Martin de Porres Church in Chicago May 1. Parishioners took to the streets to witness for peace in their neighborhood, which has experienced rising violence, after a Mass celebrated by Chicago Archbishop Blase J. Cupich. (CNS photo/Karen Callaway, Catholic New World) 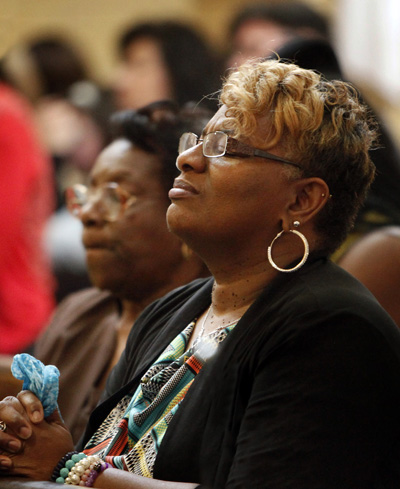 CHICAGO (CNS) — The city of Chicago’s Austin neighborhood leads a noteworthy list, but one its residents would rather not be on.

“As of April 25, the Austin community — our community, our immediate community — led Chicago in 23 homicides and 101 people being shot. This is insane. This is wrong,” Father Tom Walsh, pastor of St. Martin de Porres Parish told those gathered for Mass May 1 celebrated by Archbishop Blase J. Cupich.

“The truth of the matter is, a person is shot in Chicago every two and a half hours. Unfortunately, if the odds work, it could have happened while we were here this morning,” the priest said.

The parish is located about nine miles west of downtown Chicago.

Four of the top five communities that have seen the most violence this year are within walking distance of the West Side church, Father Walsh said.

“That’s why we as a church — this is the tallest building in this entire community, if not one of the tallest church buildings in the city of Chicago — need to continue to be a beacon of hope and of light to our world,” Father Walsh told the congregation at the end of Mass.

Immediately following Mass, the congregation poured out onto the street in front of the church and held up signs to passing drivers that said “Honk for Jesus,” “Prayer changes things,” and “Unity in the community.”

It was not the first time the church community took to the streets to witness for peace but it was the first time Archbishop Cupich visited the church, celebrated Mass with them and offered support for their efforts. The parish runs several programs to help the neighborhood including an after-school peace program that gives youth a place to go.

During the summer, parishioners go into the streets to pray for their community.

“The Catholic Church here in Cook and Lake Counties cares very much about the issue of violence and the rising tide of gun violence,” Archbishop Cupich told the congregation at the end of Mass. “We can’t do everything but we can do something.” 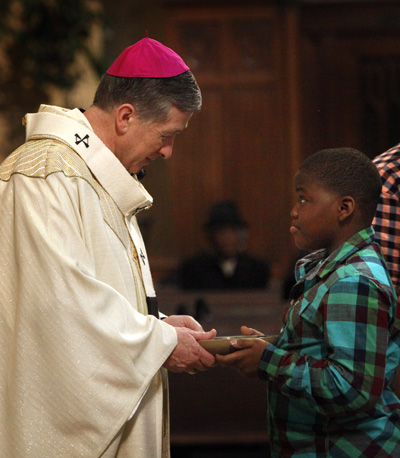 Dominic Banks hands the offertory gifts to Chicago Archbishop Blase J. Cupich during a Mass for peace at St. Martin de Porres Church on the city’s west side. The archbishop visited to offer support for parishioners’ efforts to build peace in their violent neighborhood. (CNS photo/Karen Callaway, Catholic New World)

The archbishop said he recently sent a letter to pastors of city parishes encouraging them to participate in the city’s One Summer Chicago youth employment program. Through the program parishes and churches could offer summer employment to teens and have it subsidized by the city.

“Part of the issue, in addition to guns being available, is the hopelessness in the hearts of our youth,” the archbishop said. “We have to do something to give them hope and to give them opportunities.”

“Our children are dying and people are dying for no reason, so we want to let people know that we care about what’s going on in our community,” she said.

The community is willing to take a stand because members are tired of seeing people dying for “no reason,” she said.

“I’m a teacher at St. Angela School and I listen to my children and they’re scared,” she said. “They aren’t going outside to play because they are scared something is going to happen to them. It’s time for it to stop and for people to realize that we’re killing off our people, our nation.”

Tiffany Rodriguez, a parishioner, mother and Chicago police officer, has the same feeling.

“I work in this area as a police officer and it’s getting really, really bad. There’s a lot of violence and the kids are dying over senseless acts,” she told the Catholic New World, the archdiocesan newspaper. “It goes beyond the police being involved. The community must get out among their kids and promote unity.”