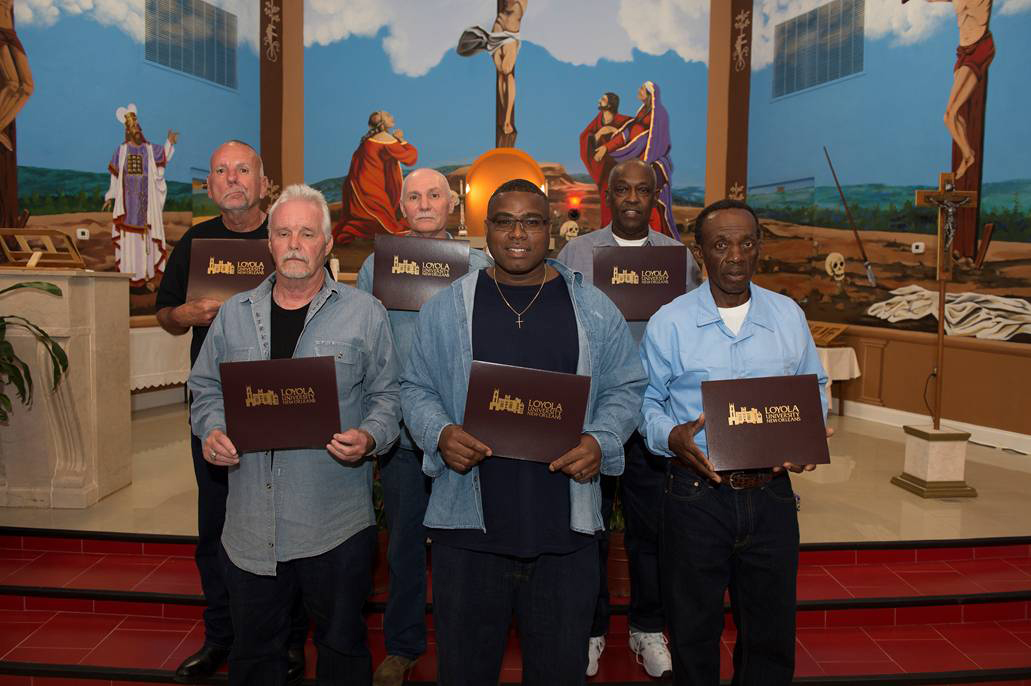 ANGOLA, La. (CNS) — Because he’s incarcerated, Ricky Krummel feels he has a glaring “X” on his back.

Such a perception not only dehumanizes people who are imprisoned in the eyes of those who outside of prison walls, he said, but it also subjects him to endless taunts on the inside, he said.

To his credit, Krummel, has found support and acceptance among a group of fellow Catholic inmates who dedicate themselves to spreading Jesus’ message of love, mercy and redemption in a very difficult place: the Louisiana State Penitentiary at Angola.

“You’ve inspired me; you’ve walked with me; you’re my family; you’re my brothers,” said Krummel, publicly thanking six Angola inmates who received their certificates in pastoral studies April 29 through an extension program offered by the Loyola Institute for Ministry.

“We Catholics make an impact,” Krummel added. “It takes a lot to humble yourself before God and man and do what y’all have done. I love y’all and I’m proud of y’all. We can’t change what we did, but we can change how we go forward.”

The six graduates, who completed 36 hours of graduate-level classes, were honored at a special Mass and commencement ceremony at Angola’s inmate-built and furnished Our Lady of Guadalupe Chapel. They are John Balfa, Milburn Bates, William Kirkpatrick, Felton Ledet, Herman Tureaud and Lester Williams.

“It was a lot of reading, a lot of study, but we all grew, and our concept of community grew,” said Balfa, an inmate for 32 years. He explained that he and his fellow graduates are peer ministers within Angola. They also conduct retreats for people from the outside, including visiting groups of high schoolers preparing for confirmation and their parents.

“Our focus is when we grow, we help other people grow,” Balfa said. “Our ministry is a ministry of presence. We’re in prison, so we all have a commonality. We all come from the same place. Ministry is helping people find hope in a hopeless situation.”

Kirkpatrick said the curriculum of extensive readings, personal and small-group reflections, writing and prayer enabled him to transcend the physical confines of Angola and discover his membership in and his own responsibility for the Body of Christ. He now focuses on what he calls “marketplace” ministry — taking the good news of Christ’s redemption to skeptics inside Angola.

“The statement right before the end of the Mass is, ‘Let’s go.’ That means you’ve got to take everything out that door. It’s on us to go out that door for God and to help every individual experience dignity and respect and God’s love,” said Kirkpatrick who became Catholic in 1995 after regular visits from two women religious.

“They lived their faith out in every aspect that I could see, and that made me pay attention,” Kirkpatrick said. “I came to Angola 34 years ago with an eighth-grade education, and I’ve accomplished, through the grace of God, a lot of things.”

Sprawling over 18,000 acres, Angola is the largest maximum security prison in the United States. It houses nearly 6,300 inmates, about 4,200 of whom are serving life sentences. There are 78 offenders on death row.

Beben said the conversations among the Angola students are similar to those he hears in a typical Catholic parish: How can we get more people involved in ministry? Why do are the same people always volunteering? Are we being so possessive of our ministerial turf that we are forgetting to invite others to join us?

“They’re involved in planning and executing the liturgies of the parish and some of them are involved in hospice. They visit guys who are in the different camps,” Beben said.

During the graduation ceremony, Beben told the group God is never finished with anyone.

“God will redeem us. God will find a way not to wipe out evil but to replace that, to build on that and bring new life out of that,” Beben said, reminding the graduates that when the resurrected Jesus appeared to his disciples, his body still bore the wounds and scars of earthly suffering.

“You guys, I think, have had a similar experience,” Beben said. “Your history is still there, but it has been changed. There is new life there, and your witness shines forth to those in this prison” and touches people on the outside.

The day concluded with Mass in the chapel, which also hosts Masses from a visiting priest.

In addition, two weekly Communion services — one conducted by inmates who are commissioned by the Diocese of Baton Rouge as extraordinary ministers of holy Communion, the other by Angola’s Catholic lay chaplain, Deacon Gerald “Jay” Jackson — also are available to the inmates.

Every role in the graduation Mass, other than the priest’s, was filled by the imprisoned: the organist, altar servers, choir members, readers and extraordinary ministers. The liturgy was filmed by LSP-TV21, Angola’s in-house television station, and photographed by a staff member from the inmate-produced magazine, “The Angolite.”

“You are part of a cloud of witnesses of Loyola students and graduates around the world,” said LIM’s director, Tom Ryan, who donned his own graduation gown from the University of Notre Dame for the commencement. Ryan announced that the graduates would be receiving a few more things on their special day: the book “Discovering Your Dream: How Ignatian Spirituality Can Guide Your Life” by Jesuit Father Jerry Fagin and LIM’s Kairos Award, honoring students and teachers who demonstrate the institute’s core values of academic excellence and ministerial collaboration.

Each of the six graduates also received a “ministry towel” depicting Christ washing the feet of one of his apostles. The towels, inked in Loyola maroon, are inscribed with Christ’s command: “Do what I have done.”

Graduate Felton Ledet, one of the altar servers and extraordinary ministers of holy Communion, said the towel was one of the most wonderful gifts he had ever received.

“It means as much as my birth certificate,” Ledet said, “because it’s a sign of my new birth.”

Donze is a staff writer at the Clarion Herald, newspaper of the Archdiocese of New Orleans.

PREVIOUS: Sisters of Life hold up dignity of single moms in 25-year-old ministry