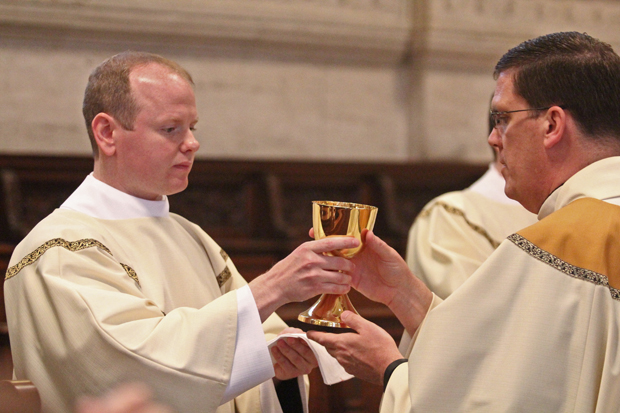 Rev. Mr. Matthew Windle (left), a transitional deacon, will be ordained a priest May 21 and the next day at his first Mass, his mentor Father Christopher Redcay (right) will preach the homily. (Sarah Webb) 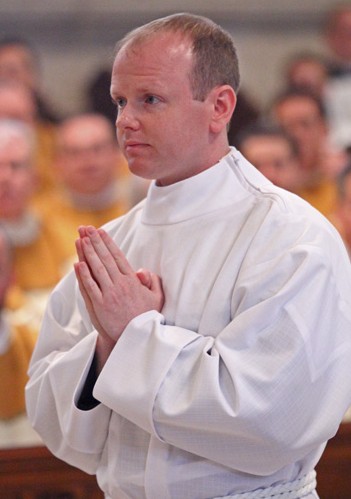 Matthew Windle before his ordination as a transitional deacon in May 2015. He will be ordained a priest for the Philadelphia Archdiocese May 21 by Archbishop Charles Chaput. (Sarah Webb)

At 37, Matt Windle is the senior of the four men who will be ordained to the priesthood by Archbishop Charles Chaput at the Cathedral Basilica of SS. Peter and Paul on May 21.

He grew up in St. Laurence Parish, Upper Darby, and Sacred Heart Parish, Havertown, the son of Frank and Marie Windle and the second in a family of five boys. After Sacred Heart School and Haverford High School he continued his education at night at Rosemont College obtaining his master’s degree in business in 2008.

He considered the priesthood a bit as a kid. “I saw something in it but I kept telling God I didn’t want it and kept doing my own thing,” he said.

Matt worked full time with Vanguard as a data analyst for about nine years. He took for granted that someday he would marry and have children; that would be good. He enjoyed (and still enjoys) golf and baseball, as well as reading, especially biographies.

Sure there were promotions at work, but somehow something was lacking and he didn’t know just what it was.

“I was getting frustrated, I needed a change,” he said. “I turned to prayer for guidance and the priesthood came back to my mind. I was dating, but I decided to put that on hold while I figured out what was going on.”

The longer Matt considered, the more convinced he became that God was calling him, and in spite of any controversies in the church he was at peace.

He also looked to priests he knew for support and guidance, and especially he remembers as a role model Father John Nordeman, who was in school ministry and in residence at Sacred Heart. Like himself, Father Nordeman had worked in the business world for a period of time before deciding on the priesthood.

When Matt made his decision to enter St. Charles Borromeo Seminary his family was in complete support.

He entered in 2009 and has never seriously looked back.

Yes, “we all have doubts,” he said, “but you pray and talk to others about it and it does help. Doubts are normal parts of the formation process.” 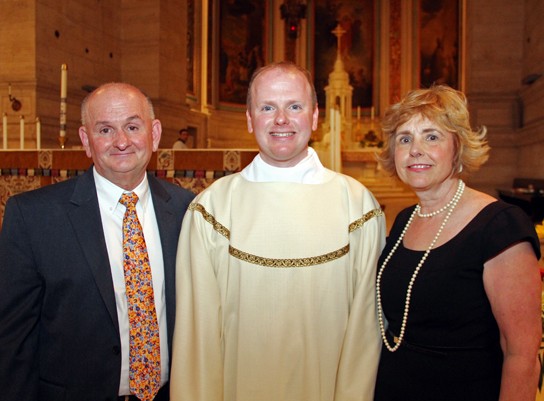 Frank and Marie Windle stand with their son Matt at St. Charles Borromeo Seminary in May 2015. (Sarah Webb)

Through his years he gradually learned how to let go, to rely on God; he couldn’t do everything by himself. And whatever came up, no matter how unexpected, he knew you just have to go with the flow.

Part and parcel of seminary training is going out into the parishes, and for Matt, that was one of the best learning experiences — observing priests first hand. Were they really fulfilled in their ministry?

“I recall an assignment to St. Katherine of Siena in Northeast Philadelphia one summer. I shadowed Father Paul Kennedy. I watched and saw how he enjoyed being a priest,” Matt said.

Some experiences affected him so profoundly they have stayed with him to this day.

For example, one summer was spent doing parish ministry especially visiting the sick. He recalls visits to a woman in her late middle years who was bedridden for a very long time. She was virtually immobile, to the point that she could only watch television through the reflection on a mirror. He sensed how comforted she was, both for his visits and the sacrament he brought to her.

The service aspect is what especially draws him to ministry, “to be part of people’s live and to help them,” he said.

His deacon assignment has been at St. Patrick Parish in Malvern, where Father Christopher Redcay has been a mentor. “He too is joyful and loves his priesthood,” Matt said.

“Now, I’m really looking forward to getting into parish ministry, especially working with reconciliation and the sacrament of the sick,” he said.

After ordination, Father Matthew Windle will celebrate his first Mass Sunday, May 22 at Sacred Heart Church in Manoa. Concelebrants will include Fathers Henry J. McKee, Paul M. Kennedy, John J. Nordeman and Christopher Redcay, who will also be the homilist. 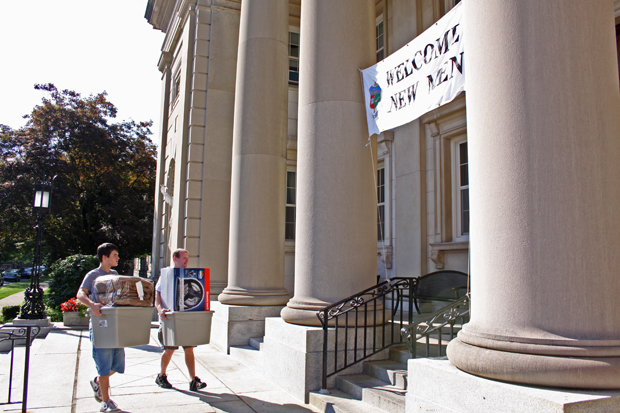 Seven years ago Matt Windle (right) was a “new man” entering St. Charles Seminary for the first time, as his younger brother helps him move in his belongings in August 2009. Rev. Mr. Windle now is packing to leave the seminary before his May 21 ordination. (Sarah Webb)

PREVIOUS: He follows the fishermen’s steps toward priesthood