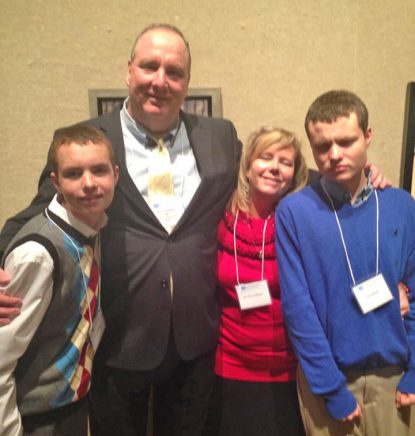 Becoming a parent is a life-changing experience, and new mothers and fathers certainly feel a sense of hope and aspiration when their child is born.

Autism is a mental condition, present from early childhood, characterized by difficulty in communicating and forming relationships with other people and in using language and abstract concepts.

AnnMarie and Steve Milligan, who attend St. Bede Church in Holland, are well acquainted with those statistics because they received an ASD diagnosis not once, but twice.

Their sons Jack, now 20, and Conor, 15, also reveal the variations of those on the autism spectrum. While Jack is almost entirely non-verbal, Conor can communicate verbally.

“They both have the same diagnosis, but they’re really two different kinds of kids,” AnnMarie said.

Managing the challenges of raising their sons has been a team effort for the Milligans, and they have focused on turning any negatives into positives.

Steve started the Top Sports program in Bucks County 16 years ago with a small group of children learning how to play soccer. The program now includes basketball and bowling.

AnnMarie is involved with Crafters for Life, a company whose mission is “to empower students with autism to create quality products for sale, with the goal of transitioning them into contributing members of a self-sufficient work force.”

Both these initiatives highlight their commitment to helping Jack and Conor participate in activities they enjoy and give them valuable life skills.

The Milligans had concerns about Jack’s development and took him for an evaluation in 1995, but they weren’t expecting an autism diagnosis.

“It was kind of shocking when we went through it the first time with Jack,” AnnMarie admitted. “I remember the doctors saying to me, ‘You know he has autism, right?’ I remember shaking my head yes, but I was pretty taken aback. ” 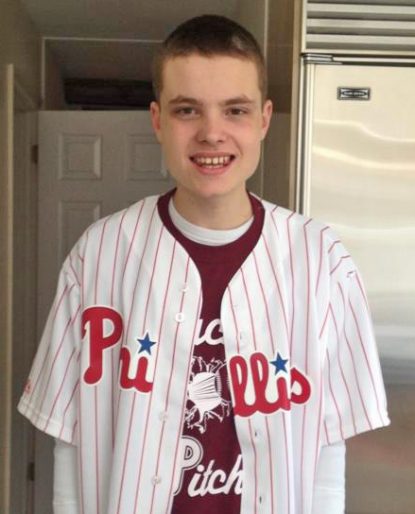 Despite their limited knowledge about autism, the couple focused on doing what they could to help Jack.

“Being the people that we are, we said, ‘OK, we’re going to deal with this,’” she said. “We took the bull by the horns with him, especially since he had language and then it disappeared. It was a frightening thing for us.”

Steve recalls the challenges of coping with Jack’s behavior problems. “It was hard because we really couldn’t take him anywhere because it took him a long time to get comfortable in a new environment,” he said. “We only had a couple of safe havens, my mom’s house or AnnMarie’s mom’s house.”

AnnMarie said both of their parents, now deceased, were very supportive despite their unfamiliarity with autism.

“From the very beginning my parents were always there for us,” she added. “I can say with confidence that I don’t think my parents really understood. They knew I needed them, and they were there every step of the way.

“My father was a very calm and kind person, especially in the beginning when Jack had no way of communicating with us and his frustration levels were so high. My dad would come into the room and he would settle down. Or he could take Jack from me and say, ‘I’ll be back in an hour.’ He made me feel like I wasn’t the worst mother on the planet.”

In addition to support from their families, the couple has relied on their faith during the difficult times.

“I’ve always been a fan of St. Anne,” said AnnMarie who usually prays first thing in the morning. “I still have the book my aunt gave me when I made my First Holy Communion.”

She also prays in the car when she’s waiting for one of her sons to finish therapy or a practice. “I can sit and close my eyes and pray a decade of the rosary,” AnnMarie said. “I loved the rosary when I was a kid.”

“I feel my Catholic upbringing and education, and the discipline that comes with it, helped us with our mindset to handle these situations,” Steve added.

The Milligan’s experience with Conor’s autism diagnosis was a bit different because he was verbal and did not have the behavior issues like his older brother. But it didn’t make the diagnosis any easier to accept.

“With Conor, it was like a kick in the teeth,” Steve said. “We kind of knew, but when you hear it officially, you think, ‘Alright, now we have two, and we’re going to have to suck it up even more.’” 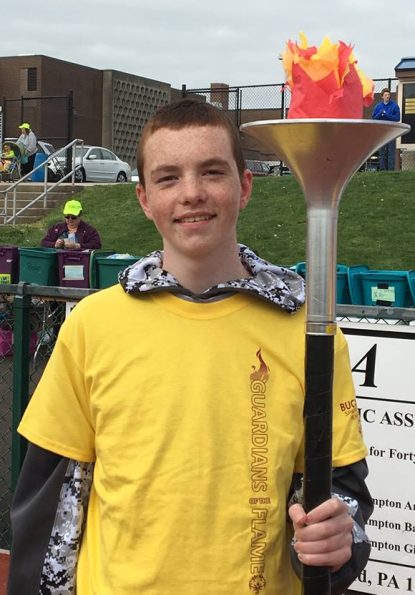 Conor Milligan holds the torch prior to a track meet in which he and his brother competed.

Despite their disappointment, the Milligans lined up therapeutic services for Conor and enrolled him in a preschool program that was instrumental in his academic and social development.

Steve noted that because Conor was verbal, their parents had a hard time understanding that he was also on the autism spectrum.

“It was actually kind of hard with our families because I think in a supportive way they thought there was nothing wrong with Conor,” he said. “They were just comparing him to Jack.”

AnnMarie attributes their response to a lack of exposure to autism.

“Steve’s dad and my mom and dad were of the same generation where kids didn’t have autism and disabilities where there were so many variables,” she said. “(Autism) had a blindness to it. They couldn’t see it so they couldn’t wrap their heads around it.”

Nonetheless, Steve and AnnMarie’s parents provided invaluable support when they needed it most.

“It was just really an example of unconditionally loving us and doing whatever they could to be there for us,” AnnMarie said. “We didn’t have a network of friends, of people being in a similar situation like we were in. They kind of went on the journey with us.”

A big part of their autism journey was establishing and running the Top Sports program which gave the couple the opportunity to connect with and help other parents who were facing similar challenges.

“We started by putting some flyers in local schools,” said Steve, who played soccer and golf at Moravian College. “I remember the first practice. We were in this tiny gym with six kids and about 20 volunteers. I had no idea whether it was working or whether it was a good idea or not. The kids were showing varying levels of not really enjoying themselves.”

Although he was initially uncertain about the success of the program, feedback from one of the fathers gave him hope. 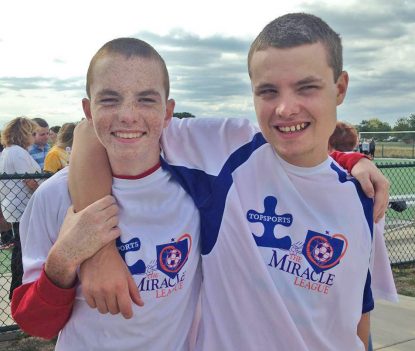 Conor and Jack Milligan support each other in their dad’s Top Sports program and in their family.

“This little girl used to cry the entire time so I thought she wouldn’t be coming back,” Steve said. “Her father said, ‘Are you kidding me? When she came home and saw her T-shirt and black soccer sneaks laid out, she really lit up.’ She really enjoyed it, but it didn’t seem that way when she was at practice.”

Within a few years they had 40 children playing soccer. “Now we get 40 kids for soccer, 60 kids for basketball and 80 kids for bowling,” he said.

“My estimate is we have a 98 percent success rate,” AnnMarie added. “We rarely have children who don’t return. Some just bowl and some only play basketball, but then you have the kids who play all the sports.”

Top Sports evolved into a win-win scenario for the Milligans. While their goal was to give their sons and other children the opportunity to play sports, they concur that the connection with other parents has been especially gratifying.

“The networking with other parents was a home run we could never have predicted,” Steve said. “That became the best part about it, the friendships we’ve developed.”

Crafts by kids with special needs

A homemade gift for a teacher became the catalyst for launching Crafters for Life, LLC. “Jack and I made sugar scrub as a teacher’s gift at Christmas,” AnnMarie said.

When the speech therapist at Council Rock North High School asked how easy it was to make, AnnMarie gave the therapist the recipe so she could make the scrub with students.

That led to discussions with the high school staff about what type of craft projects students with intellectual disabilities could make and then sell in school. Eventually, the staff asked Steve and AnnMarie and another couple, Mike and Kelly Grant, if they would be interested in forming a company that would give students opportunities to create products and make money selling them.

“We’ve been around about a year now,” AnnMarie said. “We sell at craft shows. It’s nice because the kids make the products, and they work on developing and advertising the products. They do the craft shows with us.”

In addition to the sugar scrub, handmade products available through Crafters for Life include wrapping paper, key chains and beverage coasters. The company has a website, http://craftersforlife.com/ where products can be ordered online.

“It’s kind of gained a life of its own,” Ann Marie said. “We’ve been making products for bridal showers, and baby showers, and wedding favors. It really has kind of blossomed. We would like to eventually be a company for adults over 21, and we’re hoping someday to develop a storefront where they would come and work there.”

The Milligans have focused on working together to handle the challenges they have faced during their 23 years of marriage.

“I think Ann Marie and I as a team handled things very well,” Steve said. “We do help each other. If things get really bad, we both tend to step up and do what needs to get done.” 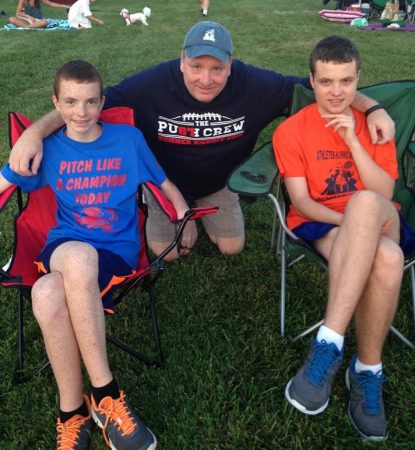 They each handle different aspects of their sons’ lives and do whatever it takes to give them the best life possible.

“It’s always been a 50-50 deal for us,” AnnMarie said. “The one thing I can say that I’m most proud of when it comes to my marriage is that we’ve always been a team. I’ve never felt by myself.”

Steve and AnnMarie agree that their sons’ diagnoses changed the couple’s lives in positive ways.

“It almost seemed the boys’ autism gave us purpose and gave us a path,” AnnMarie said. “The best part of this is that we’ve been able to help other families and do things for other people. In the end that (path) came from God, and that is how he guided us through.”

“I feel like I would have been less of a person if I didn’t have this experience in my life,” Steve added.

Despite their sons’ challenges, AnnMarie said she wouldn’t “change either one of them for all the money in the world. They will forever be our blessings.”

NEXT: He helps Vietnamese navigate the strange new land of America